WASHINGTON, April 27 (Yonhap) - U.S. President Donald Trump said Monday that he knows how North Korean leader Kim Jong-un is doing and wishes him well amid speculation he may be gravely ill, but refused to offer details.

"I do have a very good idea, but I can't talk about it now. I just wish him well. I've had a very good relationship with Kim Jong-un," Trump said during a White House press conference.

"I hope he's fine. I do know how he's doing, relatively speaking. You will probably be hearing in the not too distant future," he said.

Trump later added, "Nobody knows where he is."

Trump had earlier said Tuesday that the United States didn't know if the reports about Kim's failing health were true.

Two days later, he said he believed the report by CNN was "incorrect." The cable network had cited a U.S. official as saying that Washington was looking into intelligence that Kim was in "grave danger" after surgery.

Kim has been out of public view since April 11 when he presided over a politburo meeting of the ruling Workers' Party.

His absence from an April 15 commemoration of the birthday of his late grandfather, North Korea founder Kim Il-sung, sparked speculation that there may be something wrong with his health.

South Korean officials have insisted there is nothing unusual happening inside the regime.

Amid conflicting reports about Kim's health and whereabouts, Reuters said Friday that a team of Chinese officials, including medical experts, traveled to North Korea to "advise on" the leader.

38 North, a U.S. monitoring project, later published commercial satellite imagery showing what it said was a special train possibly belonging to Kim parked in the eastern coastal town of Wonsan.

Trump and Kim have met three times since June 2018 to try to reach a deal on denuclearizing North Korea in exchange for U.S. sanctions relief.

But negotiations have faltered since their second summit in Vietnam in February 2019 ended without a deal due to differences over the scope of their actions.

Last month Trump sent a letter to Kim -- one of a series of multiple missives exchanged between the leaders -- to offer U.S. assistance with COVID-19.

North Korea has at least publicly not accepted the offer while insisting it has no cases of the coronavirus in the country. 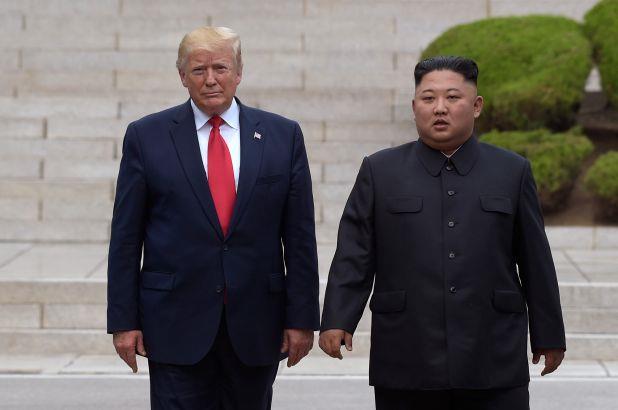