Death Toll Rises to 162 in Myanmar Jade Mine Collapse

YANGON, July 3 (Reuters) - The death toll in a landslide at a jade mine in northern Myanmar has risen to at least 162, with more feared dead, authorities said.

A heap of mining waste collapsed into a lake on Thursday (Jul 2) and buried many workers under mud and water.

By late evening on Thursday, rescue workers had recovered 162 bodies, the Myanmar Fire Services Department said, but the search was ongoing.

The disaster struck after an early bout of heavy rainfall close to the Chinese border in Kachin state, the fire services department said in a Facebook post.

The miners had apparently defied a warning not to work the treacherous open mines during the rains, local police told AFP.

They were scavenging for the gemstones on the sharp mountainous terrain in Hpakant township, where furrows from earlier digs had already loosened the earth.

Open jade mines have pockmarked Hpakant's remote terrain and given it the appearance of a vast moonscape.

Landslides in the area are common, especially when rainfall hammers the muddy terrain during Myanmar's notoriously severe monsoon season.

The workers combing through the earth are often from impoverished ethnic communities who are looking for scraps left behind by big firms.

A mudslide buried more than 50 workers last year, when a days-long recovery effort saw police digging through a "mud lake" to retrieve bodies from the sludge.

Myanmar is one of the world's main sources of jadeite and the industry is largely driven by insatiable demand for the green gem from neighbouring China.

The mines are mired in secrecy, though Global Witness claims their operators are linked to former military figures, the military elite and their cronies.

The watchdog estimated that the industry was worth about US$31 billion in 2014, although very little reaches state coffers.

The fight to control the mines and the revenues they bring frequently traps local civilians in the middle. 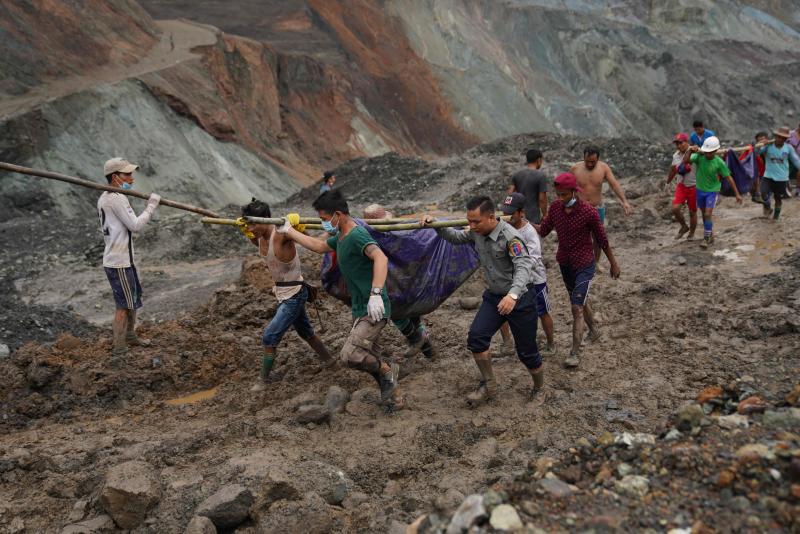