Trump had on a black mask as he walked through the corridors of Walter Reed military hospital outside Washington to meet with wounded veterans.

Trump walked past reporters and did not stop to speak to them about what had become a hotly anticipated moment – his possible change of mind on a practice recommended by the government's own medical experts, even as he resisted.

At the medical facility, Trump walked by media gathered for a carefully staged photo opportunity wearing a navy blue mask emblazoned with a presidential seal embossed in gold.

"I think it's a great thing to wear a mask. I've never been against masks but I do believe they have a time and a place," Trump said as he left the White House.

News reports this week said aides practically begged the president to relent and wear a mask in public – and let himself be photographed wearing it – as coronavirus cases soar in some states and as Trump trails Democrat Joe Biden badly in polls ahead of the November election.

Even as other officials in his administration called for the use of masks and social distancing, Trump pressured states to reopen closed economies.

Trump has steadfastly defended his administration's handling of the pandemic even though the U.S. is the hardest-hit country in the world.

The country has recently seen several days of more than 60,000 new cases, nearly 135,000 people have died and states have been left to figure out on their own how to reopen without a clear and coherent strategy from the White House. 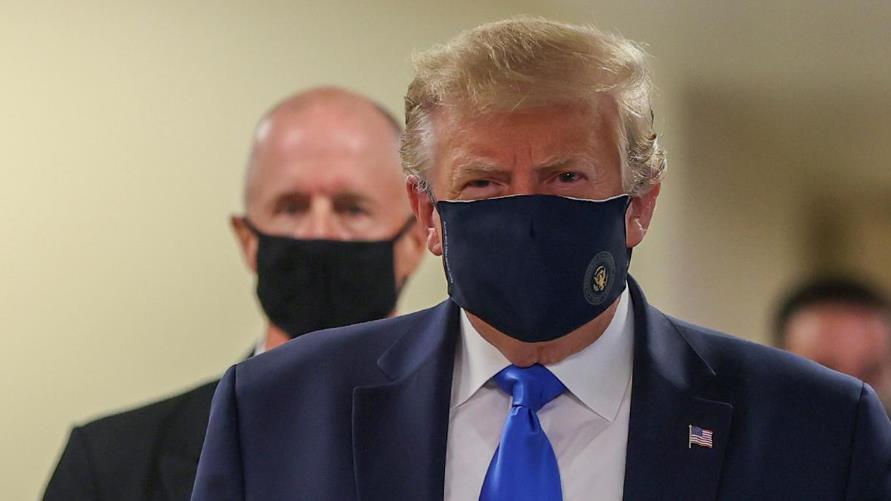