LOS ANGELES, July 12 (Xinhua) -- A total of 21 people, including 17 sailors and four civilians, were injured Sunday morning in a fire on a U.S. Navy ship at Naval Base San Diego in California, authorities said.

The injured are being treated for non-life threatening injuries at a local hospital after the fire on board USS Bonhomme Richard, according to the Naval Surface Forces, U.S. Pacific Fleet.

"The entire crew is off the ship and all are accounted," tweeted the Naval Surface Forces, adding that all inport ships have been contacted and directed to provide fire parties to possibly assist with firefighting efforts.

Around 160 sailors were aboard the ship when the fire was called away at approximately 8:30 a.m. local time, according to the tweets.

Officials said that local, base and shipboard firefighters are responding to the three-alarm fire and two military ships near USS Bonhomme Richard have shifted berths to a pier further away from the fire.

USS Bonhomme Richard is going through a maintenance availability and has a crew size of around 1,000, the U.S. Navy said.

The San Diego Fire-Rescue Department said that it is assisting on the fire on board the Navy ship, adding the department is working in unified command with federal firefighters to put out the blaze.

Pictures from the scene showed plumes of smoke rising up over the deck of the ship.

The cause of the fire is still unclear. Some people at the scene were quoted as saying by local news outlets that they had heard an explosion. The San Diego Fire-Rescue Department tweeted earlier in the morning, "Explosion with at least one injury at the USS Bonhomme Richard." 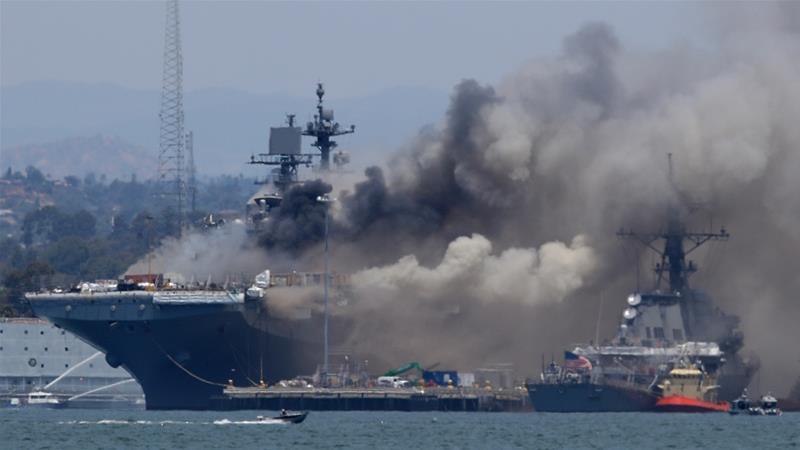