A total of 63 personnel, 40 sailors and 23 civilians, have been treated for minor injuries including heat exhaustion and smoke inhalation while fighting the fire as of early Wednesday, according to a statement from the Naval Surface Forces, U.S. Pacific Fleet.

U.S. Navy officials said there are no personnel hospitalized currently.

Helicopter have conducted more than 1,500 helicopter water bucket drops, which is cooling the super structure and flight deck enabling fire crews to get onboard internally to fight the fire, officials added.

"All shipboard fires are difficult to fight," maritime lawyer Rod Sullivan, who served in the Navy, was quoted as saying by a local television station, NBC 7 San Diego.

"It's very difficult to choke off oxygen in open deck spaces," Sullivan added, noting it's not uncommon for ship fires to take days to extinguish.

U.S. Navy officials said they will do a thorough investigation of the incident to include assessing the cause of the fire and damage to the ship. They pointed out that the fire appears to have started in a vast lower cargo area.

Around 160 sailors were aboard USS Bonhomme Richard when the fire was called away at approximately 8:30 a.m. local time on Sunday. The ship, with a crew size of around 1,000, has been docked in San Diego since 2018 undergoing maintenance, according to the U.S. Navy. 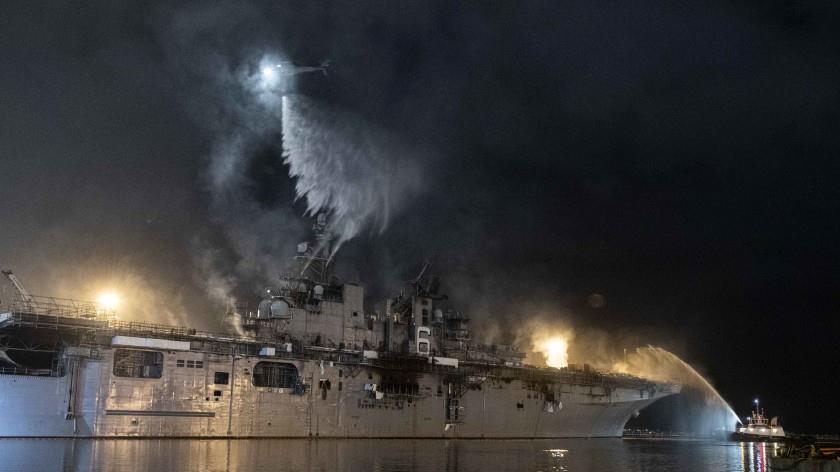