BEIJING, July 21 (Sputnik) - According to photos and reports emerging from China, the People’s Liberation Army Navy’s (PLAN’s) third and fourth aircraft carriers are having their massive hulls assembled simultaneously. The warships are anticipated to sport electromagnetic catapults, like the US Navy’s newest carrier, making them more dangerous than ever.

Photos have emerged on Chinese social media showing the assembly of two massive warships at the Jiangnan Shipyard outside Shanghai, where the PLAN’s next two aircraft carriers are being built. Anonymous, independent sources told the South China Morning Post (SCMP) they are indeed the first two Type 002 carriers, the first of which will be completed next year.

“Assembly of the new aircraft carrier has begun and is expected to be completed in the first half of next year, because the COVID-19 pandemic slowed down progress,” one source told SCMP. “Workers are also starting the keel-laying for the new carrier’s sister ship. Both ships have been built by the Jiangnan Shipyard outside Shanghai.”

In the photos, several pieces of the ships, assembled separately, can be seen being slowly fitted together.

​Earlier this month, observers noted the arrival of the “mega-modules” carrying the pre-assembled pieces into the new shipyard area at the mouth of the Yangtze River.

​A second source told the SCMP, “Construction for the second Type 002 will be faster than the first one because workers have learned and overcome a lot of problems building the first one.

It’s a challenging job because the Type 002 is our country’s first domestically designed aircraft carrier.”

The sources told the paper that work on the first Type 002 began in 2015 and on the second ship in 2018, although it was paused last year for technical reasons.

​The Center for Strategic and International Studies (CSIS) think tank in Washington, DC, estimates the ships’ displacement to be roughly 80,000 tons each, with a 40-meter beam at the waterline. That’s nearly twice the displacement of China’s present carriers and comparable to the US Navy’s first supercarriers, but not quite the size of the Nimitz-class and Ford-class carriers Washington uses today and which clock in at 100,000 tons.

Beijing commissioned its first domestically built aircraft carrier, the Shandong, in December 2019. The warship is a close parallel to the Liaoning, China’s first carrier, which it bought as an incomplete hull from Ukraine, begun in the final days of the Soviet Union as the Kuznetsov-class carrier Riga. Russia operates the Liaoning’s sister ship, the Admiral Kuznetsov, as its navy’s flagship.

However, the new Type 002 is believed to be a different design from the Shandong, which was called the Type 001a before its commissioning, but confusingly also referred to as the Type 002 at times. One major advance is that the new ships are anticipated to have electromagnetic aircraft catapults to lift their air wings into the skies, rather than the bow “ski ramp” system used by the Liaoning and Shandong.

Aircraft catapults mean the Type 002’s warplanes can take off with much more fuel and bombs than before - an important upgrade, since the staple aircraft of Chinese naval aviation, the J-15, suffers major limitations due to its size and weight. However, recent statements from the Chinese Aeronautical Establishment, the research and development branch of the Aviation Industry Corporation of China, point to the advancement of proposals to make the experimental FC-31 Gyrfalcon stealth fighter into China’s primary carrier-borne aircraft, with tests beginning before the end of the year.

However, the US Navy’s USS Gerald R. Ford, the only other warship that uses electromagnetic catapults instead of steam catapults, has struggled to make the technology work reliably.

Hong Kong-based military commentator Liang Guoliang told the SCMP the Type 002 is expected to still be oil-fueled; by contrast, the US and French navies have carriers powered by nuclear reactors.

Sputnik has previously reported on the PLAN’s plans to dramatically expand its carrier forces, not just with large fleet carriers like the Type 002, but also with several Type 075 landing helicopter docks (LHDs), a type of helicopter carrier with facilities for dispatching thousands of marines and their equipment for an amphibious assault. China’s Global Times reported the first Type 075 will soon be ready to stretch its sea legs for the first time, and the second finished construction in April; the third is under construction at a different Shanghai shipyard than the Type 002s. 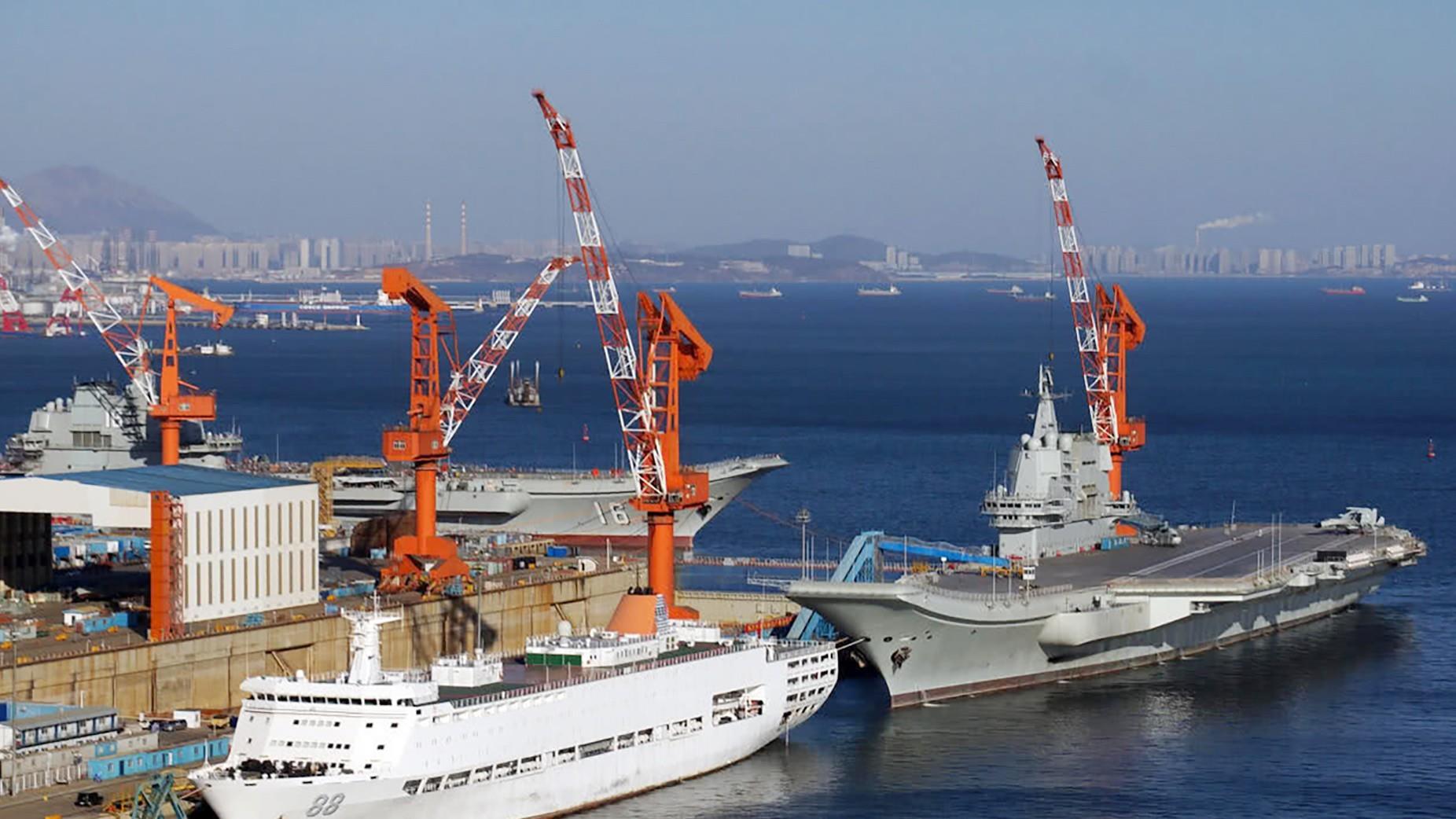