US Records over 1,000 Coronavirus Deaths in a Single Day for First Time since Early June

NEW YORK, July 21 (Reuters) - US deaths from the novel coronavirus rose by more than 1,000 on Tuesday (Jul 21), the biggest single-day increase since early June, according to a Reuters tally.

After weeks of declining fatalities, there were more than 5,200 US COVID-19 deaths in the week ended Jul 19, up 5 per cent from the previous seven days, a Reuters analysis found. That was the second successive week of rising deaths.

Nearly 142,000 Americans have died from COVID-19, a toll that experts warn will likely surge following recent record spikes in case numbers and an alarming rise in hospitalisations in many states.

US deaths peaked in April, when the country lost on average 2,000 people a day. Fatalities had steadily fallen, averaging 1,300 a day in May and under 800 a day in June, according to a Reuters tally.

But after many states reopened without achieving benchmarks for doing so safety, such as two weeks of declining cases, deaths are rising again in 21 states, including Arizona, Florida and Texas, based increases in the last two weeks compared with the prior two.

While some of the increase in new cases can be attributed to more testing, hospitalisations, which are not tied to testing numbers, began to surge in late June as well.

In Florida, about four dozen hospitals on any given day report that their (ICUs) have reached full capacity. 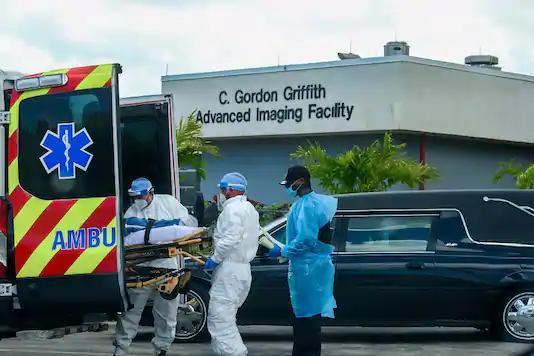