NEW YORK, Sept. 29 (Reuters) - North Korea has a "reliable and effective war deterrent for self-defence" and will now focus on developing its economy, North Korea's UN Ambassador Kim Song said on Tuesday (Sep 29), though he acknowledged that international sanctions were a hindrance.

Addressing the UN General Assembly, Kim also said the "anti-epidemic situation in our country is now under safe and stable control" as a result of measures taken to contain the spread of the novel coronavirus. North Korea has said it has no confirmed cases, though some US officials have cast doubt on that claim.

Already weighed down by tough international sanctions over its nuclear and ballistic missile programs, Pyongyang is also facing significant economic damage from strict border closures and other measures aimed at preventing a coronavirus outbreak and struggling to cope with damage from recent storms and flooding.

"Based on its reliable guarantee for safeguarding the security of the state and people, the DPRK is now directing all its efforts to economic construction," said Kim, using his country's formal name - Democratic People's Republic of Korea.

"It is a matter of fact that we badly need an external environment favourable for economic construction," he said. "But, we cannot sell off our dignity just in a hope for brilliant transformation - the dignity which we have defended as valuable as our own life. This is our steadfast position."

He said North Korea was still being threatened by military hardware like stealth fighters being used on the Korean Peninsula and "nuclear strike means of all kinds are directly aimed at the DPRK."

"Genuine peace can only be safeguarded when one possesses the absolute strength to prevent war itself," Kim said. "As we have obtained the reliable and effective war deterrent for self-defence by tightening our belts, peace and security of the Korean peninsula and the region are now firmly defended."

Independent UN sanctions monitors reported to the UN Security Council in August that North Korea was pressing on with its nuclear weapons program and several countries believe it has "probably developed miniaturised nuclear devices to fit into the warheads of its ballistic missiles."

North Korean leader Kim Jong Un and US President Donald Trump have met three times since 2018, but failed to make progress on US calls for Pyongyang to give up its nuclear weapons and North Korea's demands for an end to sanctions. 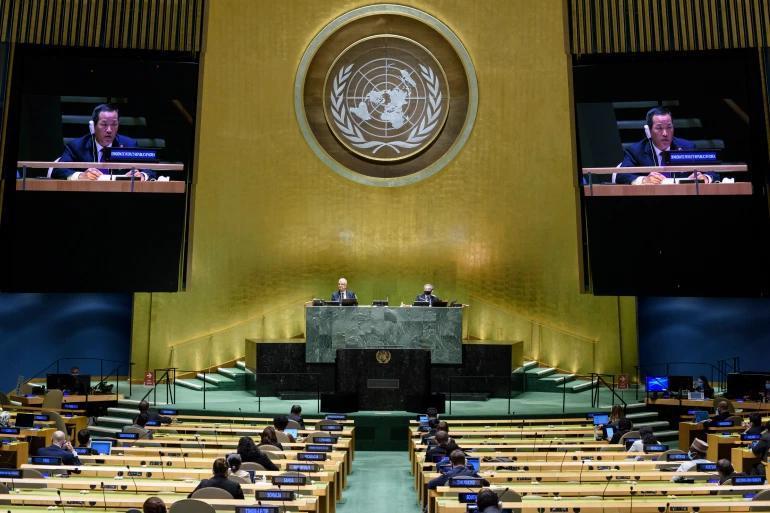