WASHINGTON, Sept. 30 (Xinhua) -- The Commission on Presidential Debates (CPD) said on Wednesday that it is considering changes for the next two debates between U.S. President Donald Trump and 2020 Democratic presidential nominee Joe Biden after their first face-off descended into chaos.

"Last night's debate made clear that additional structure should be added to the format of the remaining debates to ensure a more orderly discussion of the issues," the CPD said in a statement, adding that it "will be carefully considering the changes that it will adopt and will announce those measures shortly."

The body also said it is grateful to moderator and Fox News anchor Chris Wallace "for the professionalism and skill he brought to last night's debate and intends to ensure that additional tools to maintain order are in place for the remaining debates."

The statement came as the 90-minute-plus debate on Tuesday night, which was bulldozed by contentious exchanges and personal attacks, has been widely criticized as messy and unpresidential.

"That was a hot mess, inside a dumpster fire, inside a train wreck," CNN anchor and correspondent Jake Tapper commented. "That was the worst debate I've ever seen. It wasn't even a debate."

On the debate stage in Cleveland, Ohio, Trump appeared intended to interrupt Biden on nearly every topic he was speaking on, while the former U.S. vice president called his opponent a "liar" and a "clown" and told him to "shut up."

"Gentlemen! I hate to raise my voice," Wallace, who had to frequently intervene, said at one time. "I think that the country would be better served if we allowed both people to speak with fewer interruptions."

Speaking to reporters at the White House on Wednesday before leaving for campaign events in Minnesota, Trump said his debate performance "got tremendous reviews," adding that he sees "the ratings were very high."

The candidates will have two more debates in October leading up to Election Day. Next week, there will be a vice presidential debate between Vice President Mike Pence and Biden's running mate, U.S. Senator from California Kamala Harris. 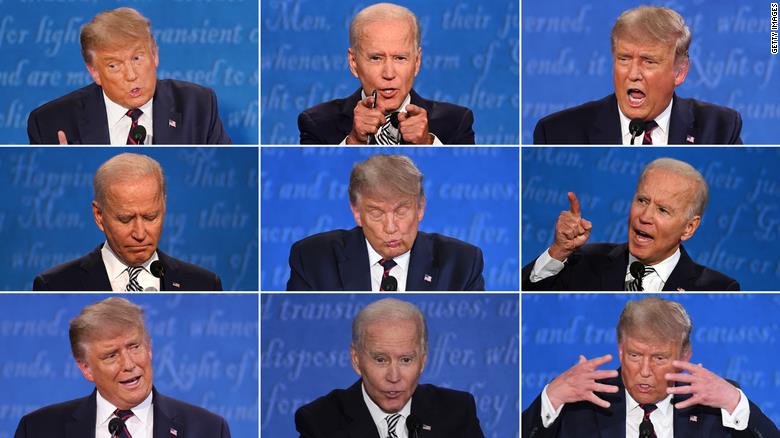