CALIFORNIA, Oct. 4 (Reuters) - Wildfires in California have burned more than 1.6 million hectares in 2020, over twice the previous record for any year and an area larger than Connecticut, the state's fire agency reported on Sunday (Oct 4).

The most-populous US state has suffered five of its six largest wildfires in history this year as heat waves and dry-lightning sieges coincided with drier conditions that climate scientists blame on global warming.

At least 31 people have died in this year's fires and over 8,454 homes and other structures have been destroyed, Cal Fire said in a statement.

California's previous record burn area was nearly 2 million acres in 2018 when the state had its most deadly and destructive wildfire that killed at least 85 civilians and destroyed nearly 19,000 structures in and around the mountain town of Paradise.

"There's no words to describe what is taking place and what continues to take place," said Cal Fire spokesman Scott McLean. "It goes to show how dry the state is and how volatile the vegetation is."

California suffered a prolonged drought from around 2010 to 2017, causing diseases and insect infestations that killed millions of trees. That followed a century of fire suppression that also built up brush and dead trees, turning some forests into tinderboxes.

City real-estate prices and second-home construction have seen the growth of communities in peripheral, wildland areas that have naturally burned for millennia.

In the world-famous wine country of Napa County, the so-called Glass Fire has damaged over a dozen wineries. Vineyards worked through the night on Saturday to pick grape varieties that can resist smoke damage. Some crops heavily exposed to smoke may be a write-off.

Firefighters were expected to get a break from cooler temperatures in Northern California this week, with a chance of rain, Cal Fire said. 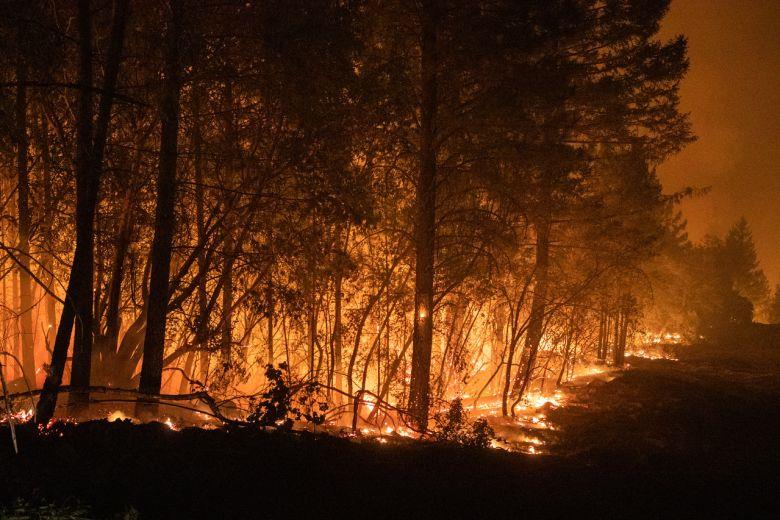