WASHINGTON, Oct. 5 (CNA) - US President Donald Trump on Monday (Oct 5) left the hospital where he has been treated for COVID-19 and boarded a helicopter to return to a White House hit by a wave of infections and a campaign further shadowed by the pandemic four weeks before Election Day.

"Will be back on the Campaign Trail soon!!!" Trump tweeted shortly before he left the hospital. "The Fake News only shows the Fake Polls."

Wearing what appeared to be a white surgical mask, Trump pumped his fist and gave a thumbs up as he walked down the steps of the Walter Reed Medical Center outside Washington, responding to a reporter's question about how many people were infected at the White House by saying: "Thank you very much."

After the short helicopter ride, Trump arrived back at the White House, where he gave a thumbs-up and waved at reporters as he walked to the executive mansion.

He then walked up the staircase of the White House South Portico, removed his mask, and posed for pictures, at times giving a thumbs-up and others a salute.

The Republican president, running for re-election against Democrat Joe Biden in the Nov 3 US election, was admitted to the hospital on Friday after being diagnosed with the disease caused by the novel coronavirus.

He announced Monday morning he would leave the Walter Reed Medical Center that evening.

"Feeling really good! Don’t be afraid of Covid. Don’t let it dominate your life. We have developed, under the Trump Administration, some really great drugs & knowledge. I feel better than I did 20 years ago!" he said on Twitter.

The disease has killed more than 1 million people worldwide and more than 209,000 in the United States alone - the highest death toll of any country.

Trump, 74, has not had a fever in more than 72 hours and his oxygen levels are normal, his medical team said in a briefing in front of the hospital. The doctors declined, however, to discuss any potential toll the disease could have on the president's lungs or disclose when Trump last tested negative for the coronavirus.

The team added that the president had received supplemental oxygen twice in recent days.

"He may not entirely be out of the woods yet," Dr Sean Conley, the White House physician, said. "If we can get through to Monday with him remaining the same or improving, better yet, then we will all take that final, deep sigh of relief."

However, Conley said the medical team believed Trump was ready to leave the hospital, stressing he would have world-class medical care around the clock at the White House.

Conley said doctors were in "unchartered territory" because Trump had received certain therapies so early in the course of the illness.

The severity of Trump's illness has been the subject of intense speculation in the past three days, with some medical experts noting that, as an overweight, elderly man, he was in a category more likely to develop severe complications or die from the disease.

Doctors also have been treating him with a steroid, dexmethasone, that is normally used only in the most severe cases.

US House of Representatives Democratic Speaker Nancy Pelosi said she hoped Trump's decision to return to the White House was not politically motivated and she expressed concern that he could become a "long hauler", a term that refers to those who suffer COVID-19 complications over an extended period.

Trump's medical team said he had not placed any pressure on the doctors treating him.

Even when discharged, Trump will need to continue treatment as he is still undergoing a five-day course of an intravenous antiviral drug, remdesivir, and will have to isolate himself for a certain period of time.

The coronavirus outbreak around Trump widened on Monday when White House press secretary Kayleigh McEnany said she had tested positive for the virus.

McEnany, who is at the forefront of the White House's often combative dealings with the media, held a briefing for reporters on Thursday in which she did not wear a face mask.

Chad Gilmartin and Karoline Leavitt, who work in the White House's press office, also have tested positive, a source confirmed to Reuters. 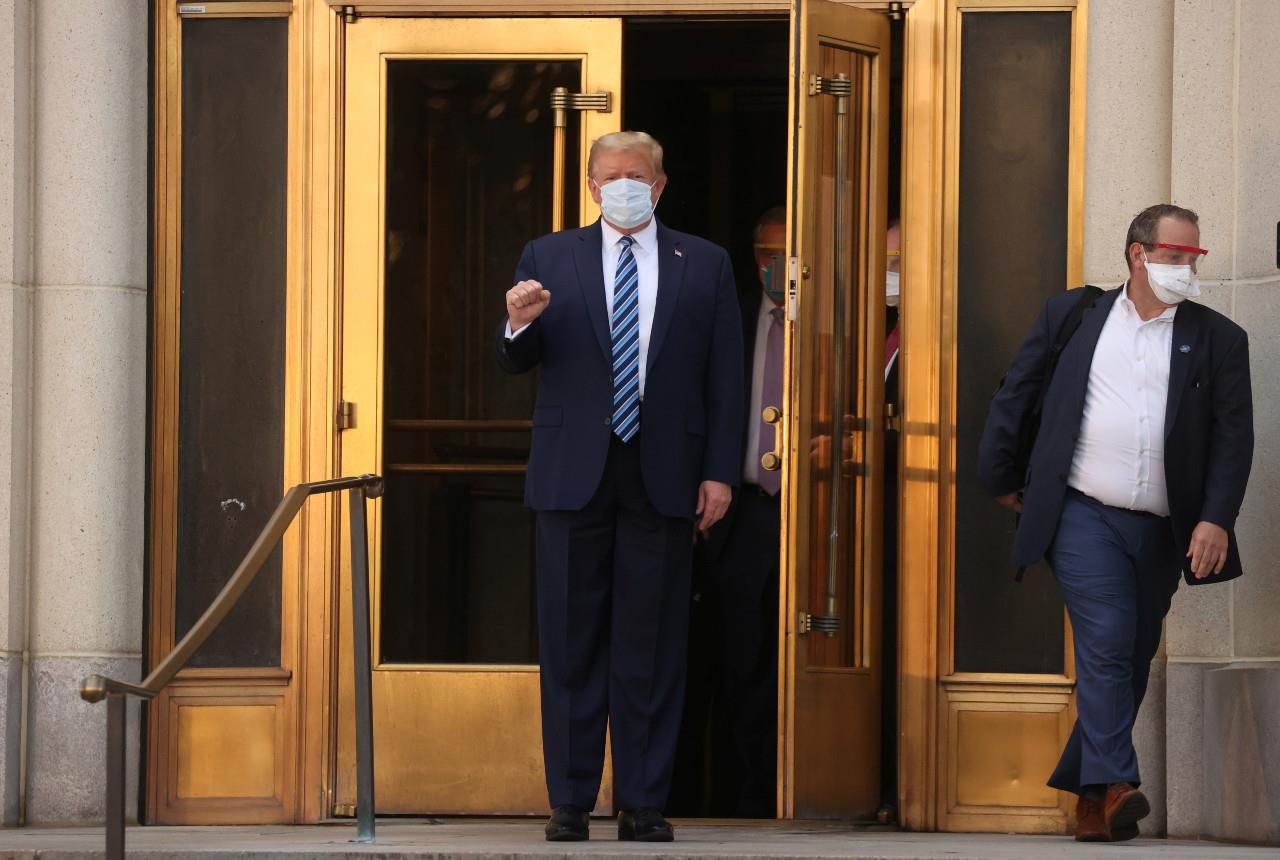