BANGKOK, Oct. 15 (Reuters) - Thai riot police cleared thousands of protesters from outside the prime minister's office early on Thursday (Oct 15) as an emergency decree by the government banned large gatherings and the publication of news "that could create fear".

A series of demonstrations over the last three months have brought tens of thousands of people onto the streets of Bangkok to demand the departure of Prime Minister Prayut Chan-o-cha, a former military government leader, and a new constitution.

They have also broken a longstanding taboo by calling for reforms to the powerful monarchy of King Maha Vajiralongkorn - and in an act cited by the government as one reason for its emergency measures, they obstructed a royal motorcade.

Shortly after the emergency decree took affect at 4am local time, riot police advanced behind shields on protesters who had camped outside Government House. Many of the thousands who had protested there late on Wednesday had already left.

Some protesters tried to resist with makeshift barricades of garbage cans, but they were swiftly pushed back. By dawn, hundreds of police occupied the nearby streets and city workers began cleaning up.

At least three of the protest leaders were arrested, Thai Lawyers for Human Rights said. Police made no immediate comment.

The government said it acted in the face of increasing disorder and after the obstruction of the motorcade.

"It is extremely necessary to introduce an urgent measure to end this situation effectively and promptly to maintain peace and order," state television announced.

GATHERINGS OF FIVE OR MORE BANNED

The emergency decree bans big gatherings of five or more people and allows authorities to stop people from entering any area they designate.

It also prohibits "publication of news, other media, and electronic information that contains messages that could create fear or intentionally distort information, creating misunderstanding that will affect national security or peace and order".

It said Arnon was arrested on charges relating to a speech he gave in the northern city of Chiang Mai. It said it did not know the grounds for the other arrests.

Prior to his arrest, protest leader Arnon told demonstrators to leave the protest site outside Government House and said they would regroup at 4pm on Thursday in Bangkok's business district of Ratchaprasong, near Central World shopping mall.

Youth leader Panusaya Sithijirawattanakul also urged people to regroup in the business district at 4pm, and said she believes more leaders will be arrested.

Tens of thousands of protesters marched in Bangkok on Wednesday. The protest movement aims to remove Prayut, who took power in 2014.

Those marching on the streets also want a new constitution and have called for a reduction in the powers of the king.

Protesters shouted at the king's motorcade in Bangkok on Tuesday after the arrest of 21 protesters. On Wednesday, some protesters slowed a convoy carrying Queen Suthida, giving the three-finger salute and chanted "get out" at police protecting the vehicle. 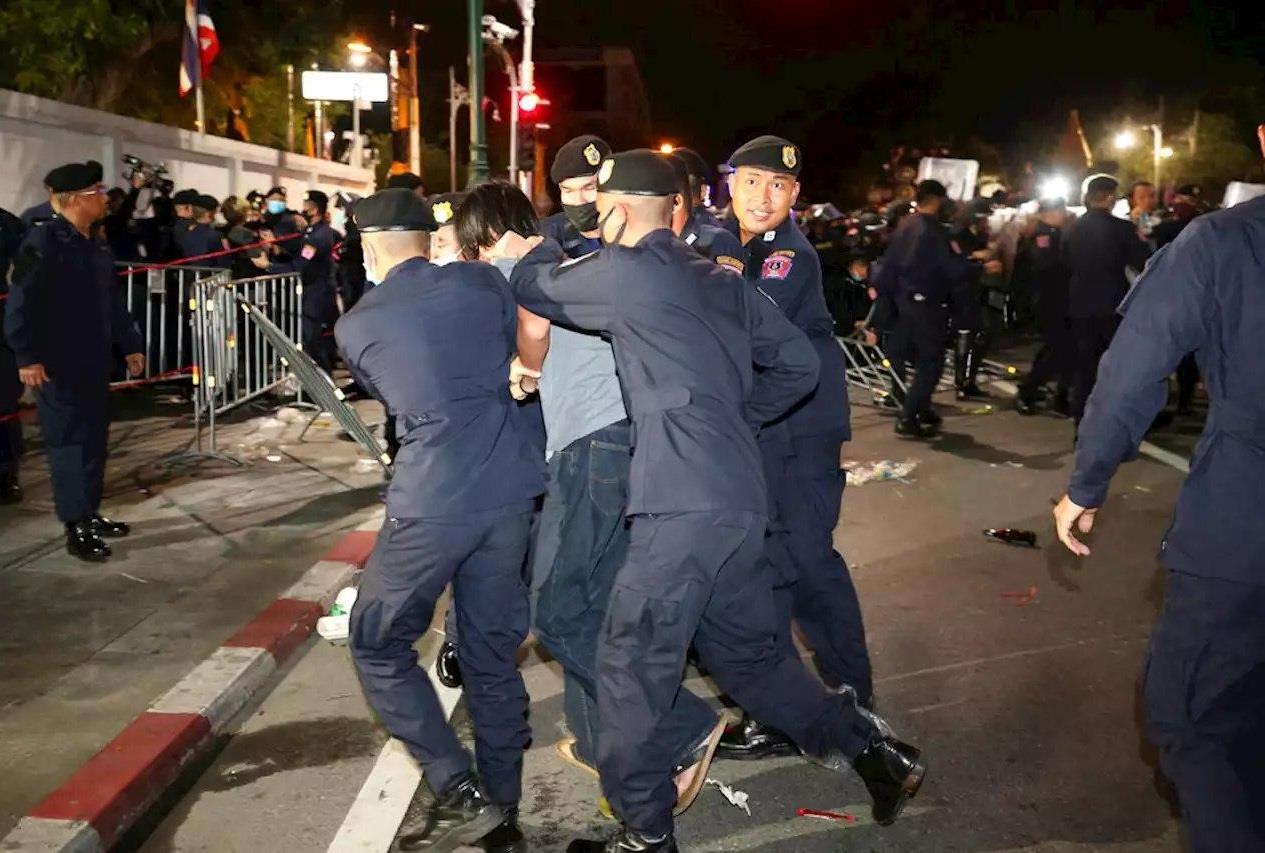