BANGKOK, Oct. 17 (CNA) - Thai protest organisers declared an end to Friday's (Oct 16) demonstration that was held in defiance of a government ban, as riot police fired stinging liquid from water cannon to disperse the crowd.

"End of protest," said a message sent from one of the organisers.

Police fired water cannon and pushed forward with riot shields and batons on Friday evening to disperse thousands of protesters who defied a ban on protests for a second day, in spite of a warning from Prime Minister Prayut Chan-o-cha.

Protesters pushed back, some with umbrellas. A few threw plastic bottles at the police in full riot gear.

"Get out, get out," the protesters chanted as police used the heaviest force yet to stop three months of protests that have challenged King Maha Vajiralongkorn's monarchy as well as demanding the removal of Prayut, a former military ruler.

"The dictatorial government is using violence to disperse the people's movement," said Tattep Ruangprapaikitseree, one of the protest leaders.

A ban on gatherings of more than five people was imposed on Thursday.

"We've issued warnings against illegal acts," police spokesman Yingyot Thepchamnong told reporters. "After this there will be intensive measures in enforcing the law."

A protest sign read "Release our friends" - a reference to the arrest of more than 40 protesters, including several of their leaders, as a government crackdown has intensified this week.

"I have to fight for my future," said Pin, 22, a university student who declined to give her full name.

Prayut first took power as army chief in a 2014 coup. Critics say he engineered a general election last year to keep hold of power as a civilian prime minister. He says the election was fair.

Protesters also want a new constitution, to replace one drafted under military rule.

In response to Friday's crackdown, police spokesperson Krissana Pattanacharoen said the authorities had warned protesters several times ahead of the gathering.

He said the police did not use rubber bullets or teargas to disperse the protest around Pathumwan intersection.

"If no unlawful act had been committed, what happened today wouldn't have occurred," he said, adding that the authorities dispersed protesters according to international standards.

"I'm not quitting," Prayut told reporters after an emergency cabinet meeting, adding that emergency measures would be in force for up to 30 days. He warned people not to violate them, saying: "Just wait and see ... If you do wrong, we will use the law."

Calls have also built up among protesters for reforms to the monarchy, which is accused by protesters of helping to entrench decades of military influence in politics.

Protests have been largely peaceful.

The only specific incident cited by the government for the imposition of emergency measures was one in which Queen Suthida's motorcade was jeered by protesters, but it also said protests were damaging the economy and national security.

Police said on Friday that two men would be charged with attempted violence against the queen, which carries a possible death sentence if her life is thought to have been threatened. Even if not, the charge can mean life in jail.

The UN High Commissioner for Human Rights was concerned about the situation in Thailand, said Ravina Shamdsani Said, a spokeswoman for commissioner Michelle Bachelet.

"We are particularly concerned about the application of serious charges, including the crime of sedition, against individuals for peacefully exercising their fundamental rights," she told a briefing in Geneva.

"Pheu Thai Party calls on General Prayut Chan-o-cha and the state officials to lift the emergency decree and to stop intimidating the people in all manners and to release those who were arrested immediately," said the party, which has the most seats in parliament. 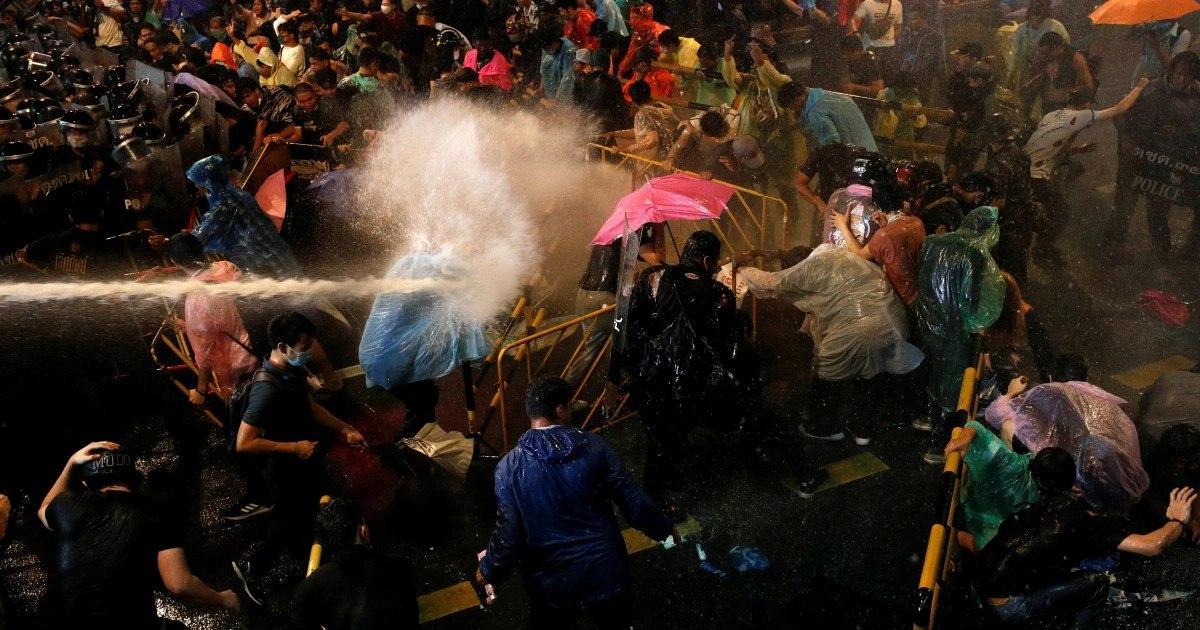