WASHINGTON, Oct. 18 (AFP) - President Donald Trump and rival Joe Biden hit the ground Sunday (Oct 18) in the swing states that will decide the US election, as the campaign turns increasingly vicious 16 days before voting.

Trump, scrambling to make up lost ground, is on a furious multi-state barnstorming tour, hopping on Sunday from Nevada to California and then back to Nevada for a day of rallies and fundraising, before moving on to Arizona on Monday.

He also plans rallies later in the week in Pennsylvania and North Carolina.

An infrequent church-goer, he attended services Sunday in a cavernous - but not entirely full - evangelical church in Las Vegas. Congregants prayed for him, and when a collection plate was passed, a pool photographer saw Trump toss in a handful of US$20 bills.

Biden, a practising Catholic, attended Mass with his wife Jill at their church near Wilmington, Delaware, before walking outside to visit the grave of son Beau, who died of brain cancer in 2015.

Limiting his own campaign itinerary due to pandemic concerns, the 77-year-old Biden then flew to North Carolina for a pair of events.

In Durham, the mask-wearing former vice president jogged to a stage in a parking lot where people in dozens of vehicles waited for him.

"We choose hope over fear, we choose unity over division, science over fiction and yes, we choose truth over lies," he told them.

His motorcade also made an unannounced stop to allow him and his granddaughter to order milkshakes, with Biden - keen to play up the stark differences between his campaign and Trump's - keeping his mask on throughout.

Both men are working to rouse their political bases and appeal to the seemingly small number of undecided voters in an election that could revolve on voter turnout.

One key opportunity comes this week with the candidates' final nationally televised debate, on Thursday evening in Nashville, Tennessee.

Their first debate descended into a chaotic stream of interruptions by Trump, head-shaking and angry rejoinders; the second was replaced by duelling town-hall meetings after Trump refused to debate virtually on the heels of his bout with coronavirus.

The final debate will be face-to-face.

If there was any doubt about the 74-year-old president's own recovery from the virus, his packed campaigning schedule appears to belie it, and his message has, if anything, grown more pointed.

On Sunday, Trump again raised a disputed allegation that messages on a laptop computer belonging to Biden's son Hunter implicated the former vice president in corrupt links to Ukraine, calling it a "proven fact".

This, he tweeted, made it "impossible" for Biden to "ever assume the office of the President!"

Biden's campaign has repeatedly rejected the allegations, angrily dismissed by the candidate as a "smear campaign".

But Trump has not backed down.

In a rally Saturday in Muskegon, Michigan he called Biden "a criminal" and even joined an enthusiastic crowd in chants of "Lock him up".

With the president trailing in polls, some analysts say he should focus on America's economic prospects, which Trump considers his strong point.

Nearly 220,000 Americans have died from COVID-19, the world's worst total, and the outbreak is now spreading in many states at rates unseen in months.

Polls show that most voters disapprove of his erratic handling of the pandemic, and Biden has made it a core theme, promising a more sober leadership.

Ahead of Trump's Nevada events, Biden said the president "needs to answer for his failed response to COVID-19".

He continued: "Donald Trump didn't take necessary precautions to protect himself and others. How can we trust him to protect Nevada families?"

Trump has dismissed his weak polling data, while Biden's supporters are also wary about over-confidence in an election that could tilt on a close race in a single state such as Florida.

IT'S GOT TO STOP

Democrats assailed Trump on Sunday not just for his attacks on Biden but on Michigan Governor Gretchen Whitmer, the recent target of a kidnapping plot by a heavily armed right-wing militia group.

The president is "incentivising and inciting this kind of domestic terrorism. It is wrong. It's got to end. It is dangerous," Whitmer told NBC's Meet the Press.

Meanwhile, Democrat Nancy Pelosi, speaker of the House of Representatives, has been negotiating with Treasury Secretary Steven Mnuchin over a stimulus relief bill to alleviate the economic strains imposed by the pandemic.

She said Sunday on ABC that she remained optimistic of a deal, though many lawmakers say the two sides remain far apart. 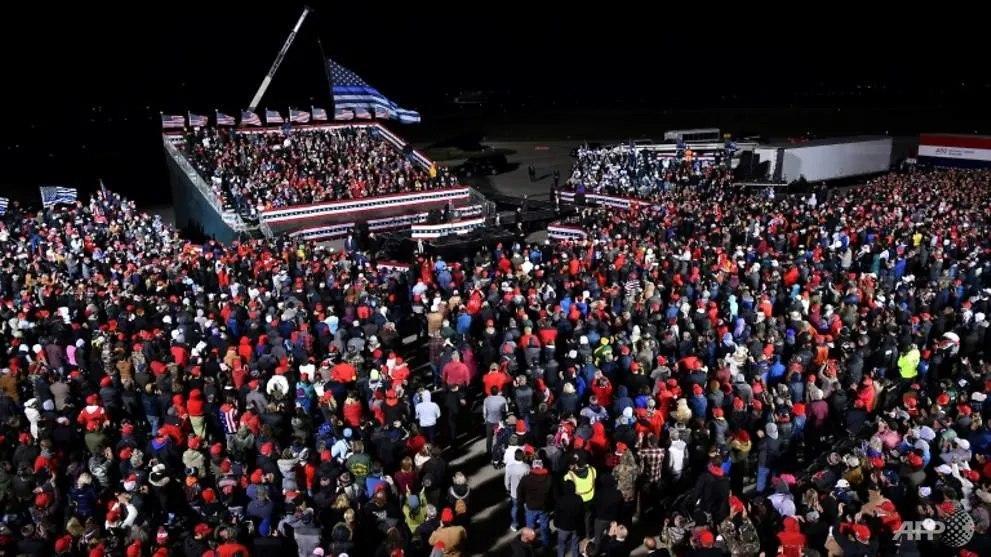