HANOI, Oct. 21 (Xinhua) -- Floods, landslides and other natural disasters triggered by downpours have left 111 people dead and 22 others missing in Vietnam's central and central highlands regions since early October, the country's Central Steering Committee for Natural Disaster Prevention and Control said on Wednesday.

The fatalities, up from 105 reported on Tuesday, were mainly reported in the provinces of Quang Tri, Thua Thien-Hue and Quang Nam, according to the committee's latest report.

Among the dead, 60 were killed in landslides and floods. Search and rescue is still underway for the missing people.

Around 124,600 houses in Ha Tinh and Quang Binh were inundated, the committee said, adding that several traffic routes in these areas remained disrupted due to flooding.

Meanwhile, more than 691,100 cattle and poultry animals have been killed or swept away.

Despite decreasing rainfall from Wednesday, high risks of flash floods, landslides and inundation may continue to threaten several areas in Ha Tinh, Quang Binh and Quang Nam, according to the country's National Center for Hydro-Meteorological Forecasting.

At a meeting with the steering committee on Wednesday, Vietnamese Deputy Prime Minister Trinh Dinh Dung requested authorities at all levels to timely provide emergency relief for people affected, especially those in Ha Tinh and Quang Binh.

He also asked localities to prepare for the possible landing of Storm Saudel in the next few days. 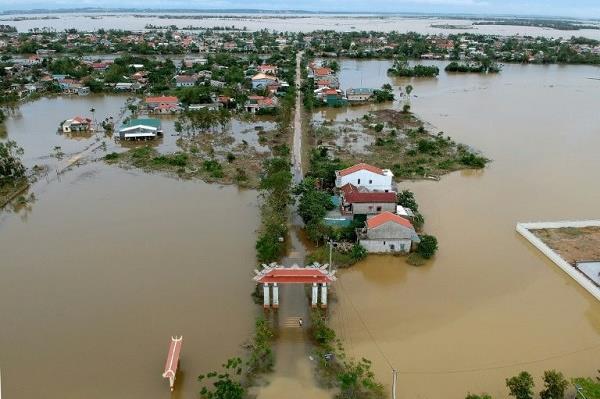