The Confederation of Indonesian Trade Unions, or KSPI, said thousands of workers from cities in West Java and East Java provinces representing 32 labour unions were taking part in mass rallies near the Presidential Palace and Constitutional Court in Jakarta.

Protests were also to take place in other parts of the country, including Yogyakarta, Banda Aceh, Medan and Makassar.

"The demands are to cancel the Job Creation Law and continue to see increases in the minimum wage in 2021," KSPI President Said Iqbal said on Sunday.

He said labour unions will also request a judicial review of the new law to the Constitutional Court.

The Job Creation Law, which was approved by Parliament on Oct 5, is expected to substantially change Indonesia's labour system and natural resources management. It amended 79 previous laws and is intended to improve bureaucratic efficiency as part of efforts by President Joko Widodo’s administration to attract more investment to the country.

The demonstrators say the law will hurt workers by reducing severance pay, removing restrictions on manual labour by foreign workers, increasing the use of outsourcing and converting monthly salaries to hourly wages.

After the law was passed, workers and students in several cities in Indonesia started demonstrations demanding that Widodo revoke the legislation.

In an interview with the Associated Press in July 2019, Widodo said he would push ahead with sweeping and potentially unpopular economic reforms, including the more business-friendly labour law, because he is no longer constrained by politics in his final term. 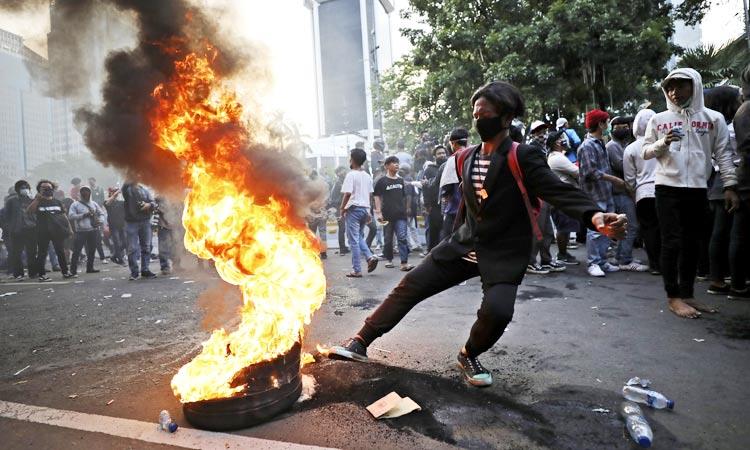