VIENNA, Nov. 2 (CNA) - Gunmen attacked six locations in central Vienna on Monday (Nov 2) starting outside the main synagogue, killing two people and injuring at least 14 in what Austria called a "repulsive terror attack" while hunting one or more assailants on the loose.

Witnesses described the men firing into crowds in bars with automatic rifles, as many people took advantage of the last evening before a nationwide curfew was introduced because of COVID-19. Police shot and killed one assailant.

Austria's capital had so far been spared the kind of deadly militant attacks that have struck Paris, London, Berlin and Brussels, among others, in recent years. Chancellor Sebastian Kurz said the "repulsive" act was "definitely a terror attack", but he could not say what the motive was.

Oskar Deutsch, the head of Vienna's Jewish community, which has offices adjoining the synagogue on a narrow cobbled street dotted with bars, said on Twitter that it was not clear whether the temple or offices were targeted but that they were closed at the time.

Rabbi Schlomo Hofmeister told London's LBC radio he was living in the compound of the synagogue. "Upon hearing shots, we looked down (from) the windows and saw the gunmen shooting at the guests of the various bars and pubs," he said.

"The gunmen were running around and shooting at least 100 rounds or even more in front of our building," he said.

Border checks were being reinforced, the Interior Ministry said, and children would not be required to attend school on Tuesday. Although people were urged to stay indoors Vienna Mayor Michael Ludwig told broadcaster ORF the city would run normally on Tuesday, albeit with a tougher police presence.

"According to what we currently know, at least one perpetrator is still on the run," Nehammer said.

"We have brought several special forces units together that are now searching for the presumed terrorists. I am therefore not limiting it to an area of Vienna, because these are mobile perpetrators," Nehammer earlier told ORF.

Kurz said the army would protect sites in the capital so the police could focus on anti-terror operations. Speaking to ORF, he said the attackers "were very well equipped with automatic weapons" and had "prepared professionally".

Videos circulated on social media of a gunman running down a cobblestone street shooting and shouting. One showed a man gunning down a person outside what appeared to be a bar on the street housing the synagogue. Reuters could not immediately verify the videos.

Authorities gave no indication of the identity of the assailants or reason for the attack.

"We really can't say anything about the background yet," Kurz told ORF. "Of course an anti-Semitic background cannot be ruled out."

In 1981, two people were killed and 18 injured during an attack by two Palestinians at the same Vienna synagogue. In 1985, a Palestinian extremist group killed three civilians in an attack at the airport.

In August, authorities arrested a 31-year-old Syrian refugee suspected of trying to attack a Jewish community leader in the country's second city Graz. The leader was unhurt.

President Emmanuel Macron of France, which has seen two deadly knife attacks in Paris and Nice in recent weeks, issued a statement expressing shock and sorrow.

"This is our Europe," he said. "Our enemies must know with whom they are dealing. We will not retreat."

And Germany's foreign ministry tweeted that the reports from Austria were "horrifying and disturbing".

"We can't give in to hatred that is aimed at dividing our societies," the ministry added.

Czech police said they had started random checks on the border with Austria.

"Police are carrying out random checks of vehicles and passengers on border crossings with Austria as a preventive measure in relation to the terror attack in Vienna," Czech police tweeted.

Czech Interior Minister Jan Hamacek said in a tweet Czech police were in touch with Austrian colleagues following the "dreadful news from Vienna".

"There is no room for hatred and violence in our common European home," he said on Twitter in Italian and German. 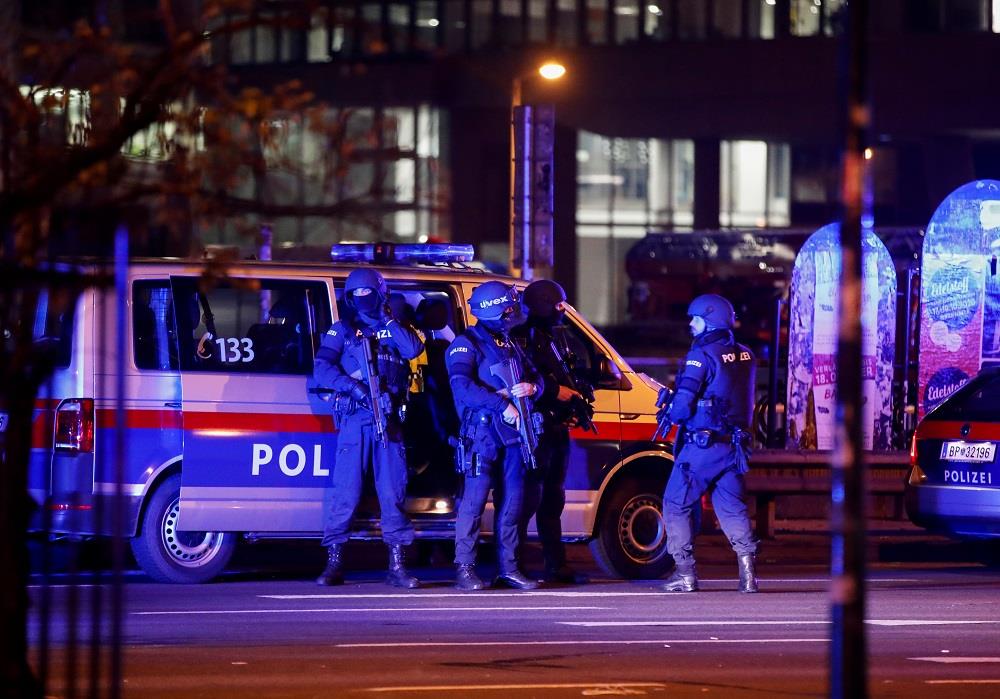