The activists were among dozens arrested during emergency measures imposed last month to try to end months of protests, but which backfired by drawing tens of thousands of people onto the streets of Bangkok.

The four were freed after a court ruled that police had reached the limit for detaining them. They still face public order and other charges relating to the protests.

"We are out and ready to fight again," Arnon said after being released from Bangkok Remand Prison, where hundreds of supporters had gathered.

Arnon broke a longstanding taboo on criticising the monarchy in August when he was the first to openly call for reforms to curb the powers of King Maha Vajiralongkorn.

Also among those released were Ekachai Hongkangwan and Suranat Paenprasert, who face rarely used charges of violence against the queen over an incident in which Queen Suthida's royal motorcade was jeered when it unexpectedly arrived where protesters had gathered.

The charges can carry the death penalty if the queen's life is thought to have been threatened and in other cases between 16 years and life imprisonment for those found guilty.

All have pleaded not guilty to the charges against them.

As well as reforms to the monarchy, protesters seek to change the constitution and demand the removal of Prime Minister Prayuth, a former junta leader they accuse of engineering last year's election to keep power that he seized in a 2014 coup. He says that vote was fair and he will not quit.

The Palace has made no comment since the start of the protests, but on Sunday the king told Britain's Channel 4 news "we love them all the same" of the protesters and "Thailand is a land of compromise". 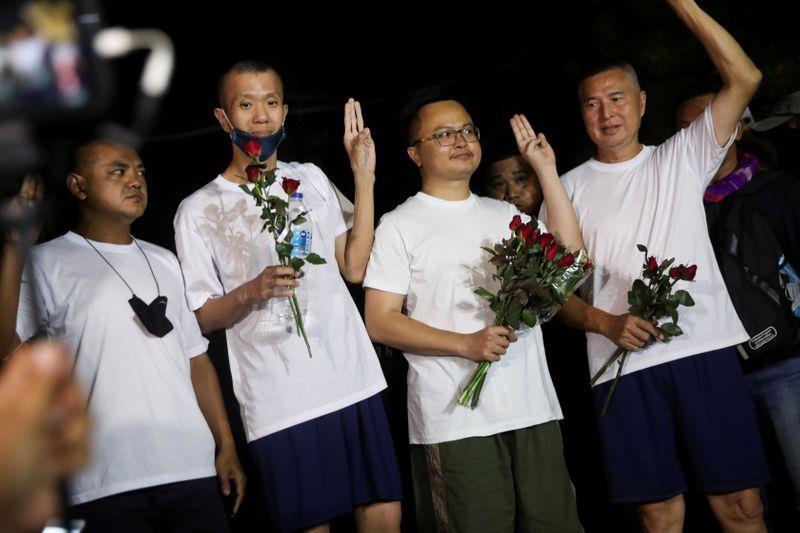