Leaders Call for Europe to Forge Own Path amid U.S. Election 'Chaos'

EUROPE, Nov. 4 (CGTN) - With the U.S. presidential election nail-bitingly closer than many expected, Europe has been left on tenterhooks waiting to know who it will be dealing with over the next four years.

Many hoped for a landslide victory for Democrat Joe Biden and the fact that there is no clear winner has led to a chorus of calls for Europe to take the world by the horns and find its own path.

Germany has been among the most vocal.

Norbert Roettgen, who is in the running to replace Germany's Chancellor Angela Merkel when she retires next year, said his country isn't prepared to work with Trump for four more years. "A second election victory would challenge us fundamentally, in a way for which we are not yet prepared," he tweeted.

The former Prime Minister of Belgium and current MEP Guy Verhofstadt also waded into the fray, labeling what's happening in the U.S. "chaos" and saying "Whatever the outcome, the EU needs to take its destiny into its own hands."

That sentiment was echoed by France's Finance Minister Bruno Le Maire, who said on Radio Classique that the U.S. had not been a "friendly partner" to the EU and that regardless of the outcome of the election, the bloc must "continue to strengthen its economic, political and technological sovereignty to face the U.S. and China."

The lack of a clear winner has surprised many in Europe, who hoped for a clean win for Joe Biden. They see in the former vice president someone who would help mend the transatlantic relationship, which has been severely strained over the past four years. President Trump has slapped billions of dollars in tariffs on EU goods, has pulled out of several multilateral deals including the Paris Climate Accord, and has name-called long-time US allies.

A second term for Trump will likely expedite Europe's push for "strategic autonomy," the concept of the bloc becoming more self-reliant and finding and claiming its own sovereign spot in the world.

With an outcome likely to be razor-thin, the deep divisions within the U.S. are on painful display, something Manfred Weber said should serve as a warning to Europe. The head of the European People's Party tweeted: "If we lose the ability to compromise, our democracies are in danger."

But not all of Europe is anti-Trump. Long before all ballots were counted, the Prime Minister of Slovenia Janez Jansa declared Trump the winner, tweeting: "It's pretty clear that American people have reelected @realDonaldTrump" and that "more delays and facts denying from #MSM [mainstream media]" would mean a bigger "final triumph for #POTUS."

Twitter later slapped the tweet with a warning about its validity. Jansa has been a long-time supporter of the US president. Trump's wife, First Lady Melania Trump was born and raised in Slovenia.

Brussels, meanwhile, urged Europe – especially its leaders – to wait for an official result before popping the champagne, whether in celebration or despair.

"We will abide by whatever announcement is forthcoming officially by the relevant U.S. authorities, and we think that everybody should do likewise," the European Commission's chief spokesperson Eric Mamer said during the daily media briefing. 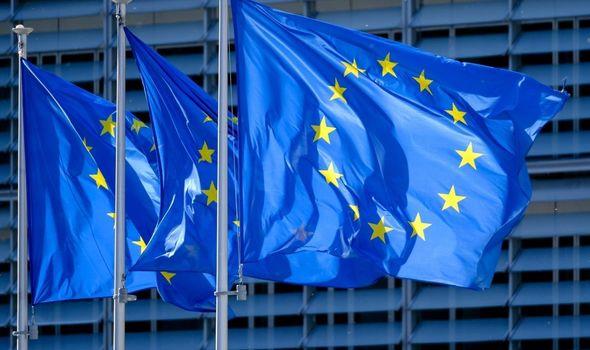