SAUDI ARABIA, Jan. 5 (CNA) - Saudi Arabia and its allies have restored full relations with Qatar, Riyadh said on Tuesday (Jan 5) after a landmark summit, ending a damaging rift that erupted in 2017.

Four nations, led by Saudi Arabia, cut ties and transport links with Qatar in June that year, alleging it was too close to Iran and backed radical Islamist groups - allegations Doha denied.

But Saudi said that the United Arab Emirates, Bahrain and Egypt were joining it in re-establishing ties with Qatar, whose ruler was greeted with a warm embrace on arrival in the kingdom by Crown Prince Mohammed bin Salman.

"What happened today is ... the turning of the page on all points of difference and a full return of diplomatic relations," Saudi Foreign Minister Prince Faisal bin Farhan said following the landmark summit in the desert city of Al-Ula.

Leaders of the six-member Gulf Cooperation Council signed two documents on Tuesday, the Al-Ula Declaration and a final communique. They are general in terms, but Prince Mohammed said the agreement affirms "our Gulf, Arab and Islamic solidarity and stability".

He called for unity to confront challenges facing the region, singling out "the threats posed by the Iranian regime's nuclear and ballistic missile programme and its plans for sabotage and destruction."

The GCC consists of three of the countries that boycotted Qatar - Saudi, the United Arab Emirates and Bahrain - neutral Oman and Kuwait, and Qatar.

Prince Mohamed, Saudi Arabia's de facto leader, extended an enthusiastic welcome to Qatar's Sheikh Tamim bin Hamad al-Thani, after the emir landed in the kingdom for the first time since the crisis began.

Sheikh Tamim was whisked with the other leaders through Al-Ula's dramatic Martian landscape to the shimmering Maraya Concert Hall, a mirrored structure situated in a nearby valley.

Later, Saudi state media tweeted a photo of the young Saudi leader behind the wheel of his sports utility vehicle, taking Sheikh Tamim on a tour of the area. 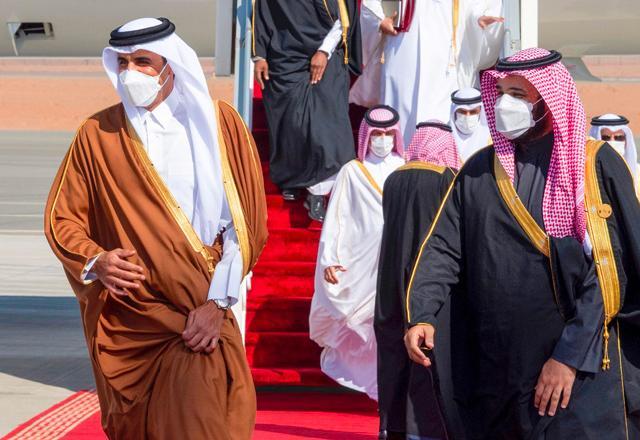