Myanmar Troops Fire on Protesters in Signs of Feared Crackdown

YANGON, Feb. 15 (CNA) - Security forces in Myanmar opened fire to disperse protesters at a power plant on Sunday (Feb 14) and armoured vehicles rolled into major cities as the new army rulers faced a ninth day of anti-coup demonstrations that saw hundreds of thousands on the streets.

As well as mass protests around the country, the military rulers were facing a strike by government workers, part of a civil disobedience movement against the Feb 1 coup that deposed the civilian government led by Aung San Suu Kyi.

Soldiers were deployed to power plants in the northern state of Kachin, leading to a confrontation with demonstrators, some of whom said they believed the army intended to cut off the electricity.

The security forces fired to disperse protesters outside one plant in Kachin's state capital Myitkyina, footage broadcast live on Facebook showed, although it was not clear if they were using rubber bullets or live fire.

Two journalists from The 74 Media, which was broadcasting live from the site of the confrontation, were arrested along with three other journalists, the news outlet said in a Facebook post.

As evening fell, armoured vehicles appeared in the commercial capital of Yangon, Myitkyina and Sittwe, the capital of Rakhine state, live footage broadcast online by local media showed, the first large-scale rollout of such vehicles across the country since the coup.

The government and army could not be reached for comment.

Shortly after midnight, residents in Myanmar reported an Internet outage. All four telecommunications networks were inaccessible from about 1am.on Monday, they said. In the early days after the coup, the internet was cut across the country.

Western embassies - from the European Union, the United Kingdom, Canada and 11 other nations - issued a statement late on Sunday calling on security forces to "refrain from violence against demonstrators and civilians, who are protesting the overthrow of their legitimate government".

The US embassy in Myanmar earlier urged American citizens to "shelter in place", citing reports of the military movements in Yangon. It also warned there was a possibility of a telecoms interruptions overnight between 1am and 9am.

"Internet shutdown in #Myanmar now in effect again across all major operators, reportedly until 09:00," Alex Warofka, product policy manager for human rights and freedom of expression at Facebook, said in a post on Twitter after the Internet went down. 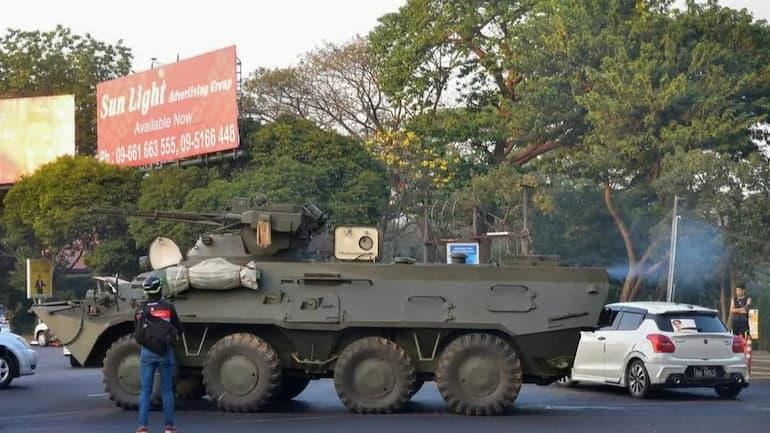