TEXAS, Feb. 16 (CNA) - A historic winter storm has brought lower temperatures to Houston than in parts of Alaska, left millions of Texans without power and spun killer tornadoes into the US Southeast on Tuesday (Feb 16).

The brutal cold that has engulfed vast swaths of the United States has shuttered COVID-19 inoculation centres and threatened to disrupt vaccine supplies to some areas.

In Lubbock, Texas, university student Corbin Antu made the best of the situation. He snowboarded up and down snow-silent, white streets, clinging to a tow rope as friends in a pickup truck pulled him around the West Texas prairie town, where it's nearly impossible to find a hill to sled or ski down.

"This is my first time snowboarding out in Lubbock. Trust me, it's not disappointing," Antu said. "There is so much powder out on the ground it feels like it's Colorado almost."

Houston Mayor Sylvester Turner said at a midday news conference that 1.3 million people in his city remain without power. The city is looking for businesses that still have power to open their doors as warming centres.

"It's critically, critically important to get the power restored as quickly as possible. It's priority number one!" Turner said.

Treacherous weather will maintain its grip on many parts of the United States from Tuesday through Friday, with up to 4 inches of snow and freezing rain expected from the southern Plains into the Northeast, forecasters said. 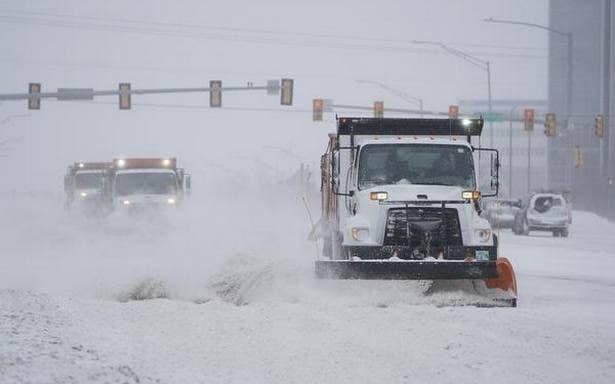