YANGON, Feb. 19 (CNA) - Opponents of Myanmar's military coup welcomed new sanctions from Britain and Canada on Friday (Feb 19) as protesters prepared to take to the streets for what will mark two weeks of daily demonstrations in the Southeast Asian country.

Adding to the diplomatic pressure, Japan said it agreed with Australia, India and the US on the need for democracy to be restored quickly after the Feb 1 army takeover in which elected leader Aung San Suu Kyi was detained.

Youth leader and activist Thinzar Shunlei Yi applauded Britain's asset freezes and travel bans on three generals, as well as steps to stop any aid helping the military and to prevent British businesses working with the army.

Canada said it would take action against nine military officials.

"We urge other nations to have such coordinated and united response," she wrote on Twitter. "We will be waiting for EU sanctions announcement on (Feb 22)," she said, calling on people to gather at the EU office push for sanctions to include measures against military businesses.

Myanmar's junta has not yet reacted to the new sanctions. On Tuesday, an army spokesman told a news conference that sanctions had been expected.

There is little history of Myanmar's generals giving in to foreign pressure and they have closer ties to neighbouring China and to Russia, which have taken a softer approach than long critical Western countries.

Junta leader Min Aung Hlaing was already under sanctions from Western countries following the 2017 crackdown on the Muslim Rohingya minority.

"Sanctioning military leaders is largely symbolic, but the moves to sanction military companies will be much more effective," said Mark Farmaner, Director of the Burma Campaign UK group in a reaction to the sanctions.

After nearly half a century of full military rule, businesses linked to the army have a significant stake across the economy in the country of 53 million people, with interests ranging from banking to beer, telecoms and transport.

The army seized back power after alleging fraud in Nov 8 elections won by Aung San Suu Kyi's National League for Democracy (NLD) party, halting a transition to democracy that had begun in 2011 and detaining her and hundreds of others. 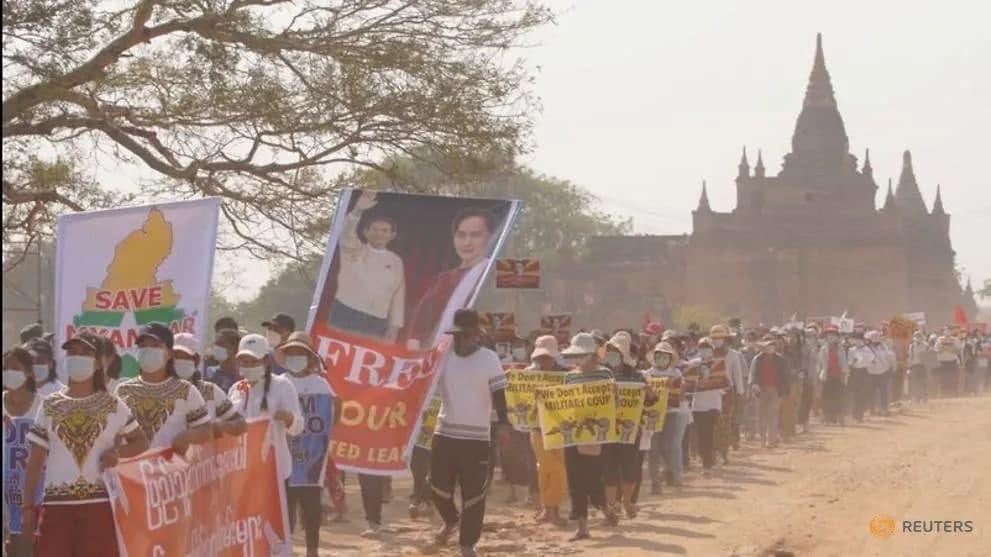