JAKARTA, Feb. 22 (CNA) - The Indonesian capital of Jakarta could see more flooding and landslides this week as the meteorology agency predicted rains of moderate to heavy intensity to sweep through the city over the next few days.

The rains will primarily hit Jakarta in the evening and last well into the morning, Mdm Dwikorita Karnawati, chief of the Meteorology, Climatology and Geophysics Agency (BMKG) said in a statement.

“The intensity will weaken on Feb 22 but could intensify into moderate to heavy on Feb 23 and 24,” she said, adding that this could trigger more flooding and landslides in Jakarta and its surrounding suburbs.

Several areas in Jakarta and the neighbouring cities of Tangerang and Bekasi were inundated in water up to 2m deep on Saturday (Feb 20) morning. Mdm Karnawati said that day, Jakarta recorded between 154mm and 226mm of rain over a 24-hour period. Rainfall above 150mm a day is considered extreme.

According to the National Disaster Mitigation Agency, the rains caused several rivers to surge and overflow to crowded housing complexes along their banks.

At least five people were killed, four of them were children who were swept away by the strong river currents in separate places in South and West Jakarta. The other was a 67-year-old man who was trapped at his home in South Jakarta as water continued to submerge his neighbourhood.

The rains also overwhelmed Jakarta’s drainage system, causing several major streets and toll roads to be submerged in water up to 70cm deep, rendering them inaccessible. The floods also affected areas which are not considered flood prone.

“My neighbourhood has never flooded before. I have lived here since I was five years old but on Saturday it was submerged,” Mdm Ratih Andriani, 41, told CNA of her neighbourhood in Jagakarsa, South Jakarta.

“The rain was so heavy I had trouble sleeping. There was thunder and lightning too. At 3am, water on the small river behind my housing complex began to rise,” she continued. Two hours later, her neighbourhood was submerged in 40cm deep water.

Mdm Andriani said she suffered little property damage and that water in her neighbourhood receded at 10am. “But the floods have caused massive traffic jams and cut off access in some areas. I was supposed to take my daughter to see the doctors that day,” she said.

Mr Ferdinand Simanjuntak said he was stuck in the traffic for four hours for his 10km travel. “I was trying to get to my mother’s house. She was living alone and her house got flooded. But some roads were inaccessible and I had to take multiple detours through small back roads to get to where I needed to go,” he told CNA.

By the time he got to his mother’s house in Pejaten, South Jakarta, Mr Simanjuntak said she was taking shelter at a neighbour's house.

“I braved the flood to retrieve a few precious belongings from my mother’s house. It was flooded in 1m-deep water. Her furniture and electronics were destroyed. I grabbed everything that I could save and I took my mother home with me,” he said. The two then spent hours trying to get out of the flood prone area.

The flooding had displaced more than 1,700 people. As of Monday morning, most of the victims had returned to their homes to clean the mud and silts covering their belongings. 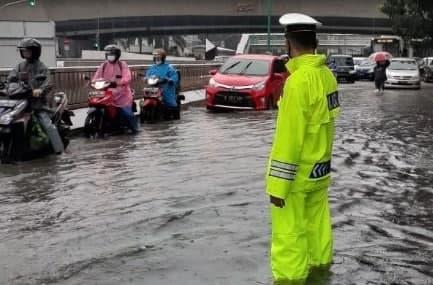