YANGON, March 8 (CNA) - Two protesters were killed by gunshot wounds to the head in Myanmar on Monday (Mar 8), witnesses said, while shops, factories and banks were closed in the main city Yangon as part of the uprising against the country's military rulers.

Photos posted on Facebook showed the bodies of two men lying on the street in the northern town of Myitkyina. Witnesses said they were taking part in a protest when police fired stun grenades and tear gas. Several people were then hit by gunfire from buildings nearby.

One witness, who said he helped move the bodies, told Reuters two people were shot in the head and died on the spot. Three people were injured.

"How inhumane to kill unarmed civilians," said the witness, a 20-year-old man. "We must have our right to protest peacefully."

It was not immediately clear who fired on the protesters although both police and the military were at the protest, the witnesses said.

Police and military have killed more than 50 people to quell daily demonstrations and strikes against the Feb 1 coup, according to the United Nations last week.

Crowds demonstrating against the coup gathered in Yangon as well as the second-biggest city, Mandalay and several other towns, according to videos posted on Facebook. Protesters in Dawei, a coastal town in the south, were protected by the Karen National Union, an ethnic armed group engaged a long-running war with the military.

Figures by the Assistance Association for Political Prisoners advocacy group showed nearly 1,800 people have been detained under the junta as of Sunday.

The killings have drawn anger in the West and been condemned by most democracies in Asia.

The United States and some other Western countries have imposed limited sanctions on the junta and Australia on Sunday cut defence ties, saying it would only deal with non-government groups in Myanmar.

Myanmar's giant neighbour China said on Sunday it was prepared to engage with "all parties" to ease the crisis and was not taking sides. 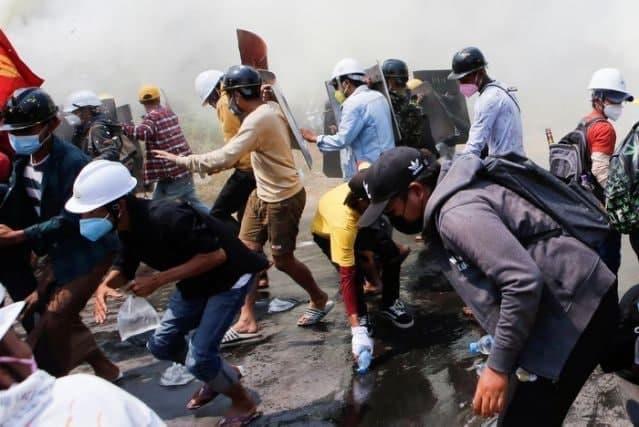