PRAGUE, April 22 (Reuters) - The Czech Republic on Thursday ordered Russia to remove most of its remaining diplomatic staff from Prague in an escalation of the worst dispute between the two countries in decades.

The spy row flared on Saturday when Prague expelled 18 Russian staff, whom it identified as intelligence officers.

It said two Russian spies accused of a nerve agent poisoning in Britain in 2018 were also behind an explosion at a Czech ammunition depot in 2014 that killed two people.

Russia has denied the Czech accusations and on Sunday ordered out 20 Czech staff in retaliation.

Thursday's decision, announced by Foreign Minister Jakub Kulhanek, requires Russia to have the same number of envoys as the Czech Republic has in Moscow. That means Russia will have to withdraw 63 diplomats and other staff from Prague, although Prague gave it until the end of May to do so.

Together with the initial step, this will greatly reduce what has been by far the biggest foreign mission to Prague and much larger than the Czech representation in Moscow.

"We will put a ceiling on the number of diplomats at the Russian embassy in Prague at the current level of our embassy in Moscow," Kulhanek said.

"I do not want to needlessly escalate...but the Czech Republic is a self-confident country and will act as such. This is not aimed against Russians or the Russian nation, but a reaction to activities of Russian secret services on our territory."

Russia's Foreign Ministry in reaction demanded a reduction in the embassy's staffing level, alluding to disparity in numbers of local employees.

"The (Czech) ambassador was told that we reserve the right to take other steps in the event the hysterical anti-Russian campaign spirals further," Russian Foreign Ministry spokeswoman Maria Zakharova said in a statement.

At a time of acute tension in Russia's relations with the West, the dispute has prompted NATO and the European Union to throw their support behind the Czech Republic, which is a member of both blocs.

"Allies express deep concern over the destabilising actions Russia continues to carry out across the Euro-Atlantic area, including on alliance territory, and stand in full solidarity with the Czech Republic," NATO's 30 allies said in a statement.

Slovakia expelled three Russian envoys on Thursday in solidarity with the Czech Republic. The Russian response to that step was not immediately clear.

In the last week, Moscow has also kicked out diplomats from Bulgaria, Poland and the United States in retaliation for expulsions of its own staff.

President Vladimir Putin warned foreign powers in his state of the nation speech on Wednesday not to cross Russia’s “red lines”, saying Moscow would make them regret it. 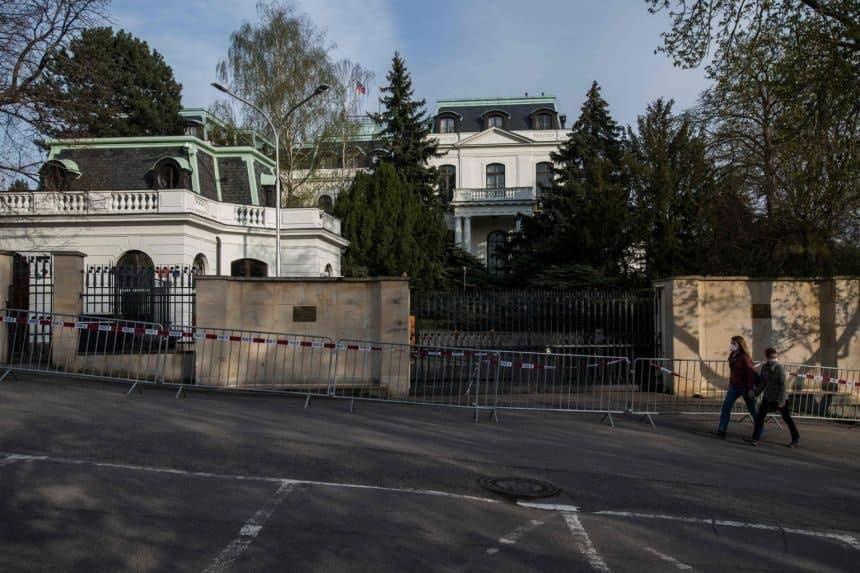