Honolulu, July 2 (Reuters) - A decades-old Boeing Co (BA.N) 737-200 cargo airplane with two people on board made an emergency nighttime landing in the Pacific Ocean off the coast of Honolulu, Hawaii, early on Friday, the U.S. Federal Aviation Administration said.

"The pilots had reported engine trouble and were attempting to return to Honolulu when they were forced to land the aircraft in the water," the FAA said in a statement.

The FAA and National Transportation Safety Board (NTSB) will investigate.

Transair Flight 810 departed Honolulu at 1:33 a.m. local time bound for Maui's Kahului airport but quickly turned back toward Honolulu, according to aviation data from FlightAware.com.

Shortly after, the Coast Guard responded to reports of the downed plane south of the island of Oahu with two people on board. Around 2:30 a.m., a Coast Guard helicopter located the debris field and found one of the crew members clinging to the plane's tail. That person was airlifted by helicopter to a hospital.

The other survivor was spotted on top of some floating packages and was picked up by a Honolulu Fire Department rescue boat for transport to shore, according to a spokesperson from the U.S. Coast Guard.

Both were being evaluated by medical personnel and their current condition was unknown.

The crew knew they were in trouble.

"We are going to need the fire department ... We're going to lose the other engine, too. It's running very hot."

Boeing said it was closely monitoring the situation and was in contact with the NTSB. The airplane was built by Boeing in 1975, according to FAA records. The plane was first delivered to Pacific Western Airlines and joined Transair's fleet in 2014, according to Flightradar24.com.

Rhoades Aviation Inc does business as Transair, which is one of Hawaii’s largest air cargo carriers and has been in business since 1982. It has a fleet of five Boeing 737s that fly daily to all major Hawaiian island destinations, according to its website.

Marsh & McLennan Cos Inc (MMC.N), the insurance broker for Boeing, declined to comment.

Shares of Boeing were trading slightly lower on Friday afternoon on the New York Stock Exchange.

Boeing's 737 MAX was cleared to fly by regulators late last year after a 20-month grounding following two accidents that killed hundreds of people.

The 737 in Friday's incident was an older generation than the MAX. 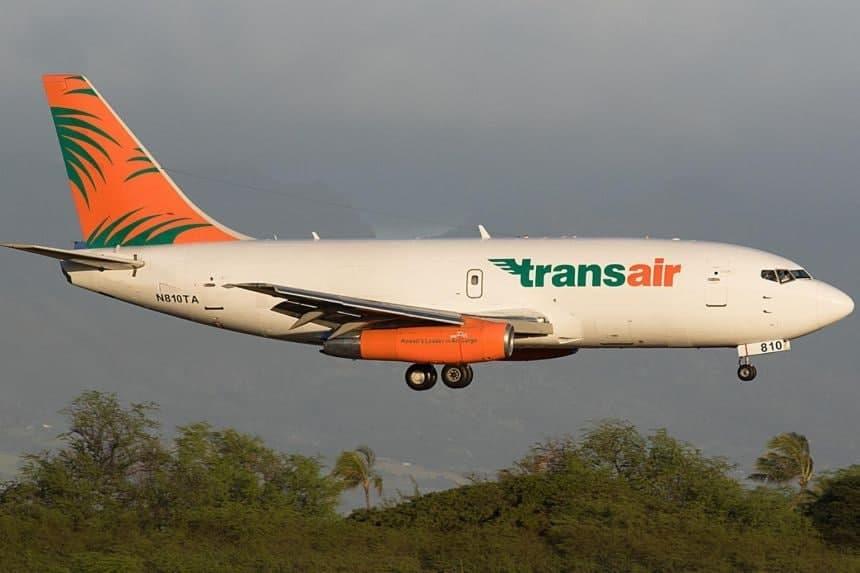