At least 28 people behind assassination of Haiti president: Police

PORT-AU-PRINCE, July 8 (CNA) - At least 28 people carried out the assassination of President Jovenel Moise, Haitian police said on Thursday (Jul 8), adding that 26 of them were Colombian and two were Americans of Haitian origin.

"We have arrested 15 Colombians and the two Americans of Haitian origin. Three Colombians have been killed while eight others are on the loose," national police director general Leon Charles said at a news conference.

On Wednesday police said four of the suspects had been killed. Charles did not explain the discrepancy.

He also said the "weapons and materials used by the assailants have been recovered".

Charles said in a televised briefing that authorities had tracked down the suspected assassins to a house near the scene of the crime in Petionville, a northern, hillside suburb of the capital Port-au-Prince.

A fierce firefight lasted late into the night on Wednesday. Officers were heavily patrolling the area from early on Thursday.

"We have the physical authors, now we are looking for the intellectual authors," Charles said.

Charles spoke a day after Moise and his wife Martine were attacked by gunmen at their private residence in the capital Port-au-Prince.

Moise was shot dead in the early morning attack, and his wife was wounded. She has been taken to Miami by air ambulance and authorities have said her condition is stable.

The US State Department said it was in regular contact with Haitian officials, including investigative authorities, to discuss how the United States could provide assistance. A State Department spokesman, however, could not confirm if a US citizen was among those detained.

Officials in mostly French and Creole-speaking Haiti had said on Wednesday that the assassins appeared to have spoken in English and Spanish.

The poorest country in the Americas now has no president or working parliament and two men claiming to be in charge as prime minister.

Charles vowed the hunt for the other alleged assassins would continue.

"We will strengthen our investigation and search techniques to intercept the other eight mercenaries," he said. 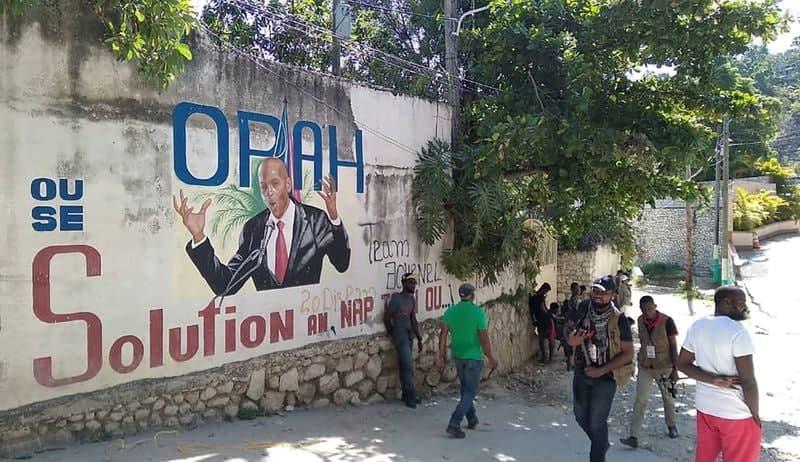