BEIJING, July 9 (Xinhua) -- China and the European Union should establish correct perception of each other, remove distractions, and promote the healthy and stable development of bilateral ties on the right track, Chinese State Councilor and Foreign Minister Wang Yi has said.

Wang made the remarks during a video meeting with EU High Representative for Foreign Affairs and Security Policy Josep Borrell on Thursday.

China and the EU are comprehensive strategic partners and the world's two major independent forces without any geopolitical conflicts or clash of fundamental interests, said Wang.

"We share the responsibility of maintaining bilateral dialogue and cooperation, we have the obligation to adhere to the principles of mutual benefit and win-win cooperation, and we should be confident of jointly coping with global challenges," he said.

Wang stressed that China and Europe should stay committed to their comprehensive strategic partnership, and to the principle of mutual respect and seeking common ground while putting aside differences.

We support the European side in independently developing its relations and cooperation with China, he said.

Top priority should be given to strengthening communication and coordination on areas (related to COVID-19) including vaccines, diagnosis and treatment, and prevention and control, with a focus on providing more substantive support to developing countries, he said.

China and Europe should continue to support each other in successfully hosting the 15th meeting of the Conference of the Parties to the Convention on Biological Diversity (COP15) in China's Kunming, the UN Climate Change Conference in Glasgow, Britain, and the 7th International Union for Conservation of Nature's World Conservation Congress in the French city of Marseilles.

Wang pointed out that all countries should jointly safeguard the international system, with the purposes and principles of the UN Charter at the core, and jointly uphold international order based on international law.

He reiterated China's stands on issues related to Xinjiang, Hong Kong, and human rights, and stressed that China's will and determination to safeguard its national sovereignty and national dignity are unwavering.

While regarding China's rapid development as a fact that is in line with the historical trend, Borrell said the EU has no intention of engaging in institutional confrontation or destabilizing EU-China relations, according to a press release of the Chinese foreign ministry.

Borrell said that Europe and China should manage their differences instead of allowing differences to hinder their exchanges and cooperation.

The EU and China should develop a strong and sincere relationship, which is in the interests of both parties, said Borrell.

The EU is willing to restart contact and dialogues with China, and strengthen cooperation in the fight against the COVID-19 pandemic, climate change, and biodiversity protection.

The EU does not agree to unilateral sanctions on other countries based on domestic laws. The European side adheres to its own values, but respects China's sovereignty and territorial integrity and does not support the "Hong Kong independence," he added. 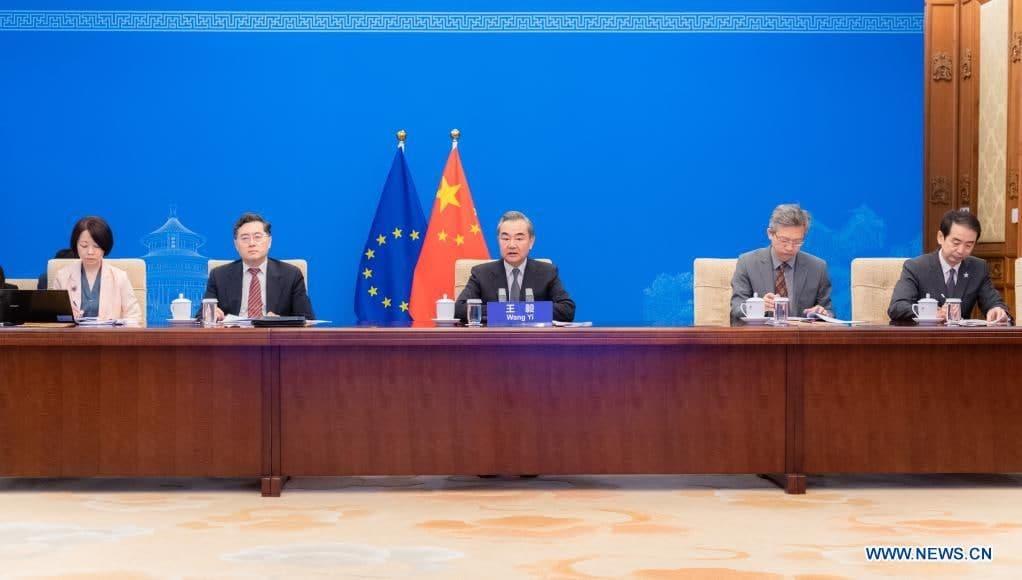