UN chief pleads for 'lifeline' for Afghanistan, engagement with Taliban

KABUL, Sep 13 (AFP) - UN chief Antonio Guterres on Monday (Sep 13) urged the international community to engage with the Taliban and to provide a "lifeline" of desperately needed aid to Afghans, as the first foreign commercial flight left Kabul - a hopeful sign for those still trying to leave the country.

Guterres was in Geneva to host a donor conference aimed at raising hundreds of millions of dollars for the violence-torn country, which was taken over by the Taliban last month in a lightning offensive that took retreating US troops by surprise.

In all, UN humanitarian chief Martin Griffiths said donor countries pledged a total of US$1.2 billion in aid, but did not say how much had been earmarked for the UN's flash appeal for US$600 million to fund emergency assistance for the rest of this year.

The flash appeal was launched amid fears that malnutrition is looming for many, and perhaps even starvation, with mass displacement in the country and winter fast approaching.

Guterres said he believed aid could be used as leverage with the Islamist extremists to exact improvements on human rights, amid fears of a return to the brutal rule that characterised the first Taliban regime from 1996 to 2001.

"It is impossible to provide humanitarian assistance inside Afghanistan without engaging with the de facto authorities," the UN secretary-general told ministers attending the Geneva talks.

"It is very important to engage with the Taliban at the present moment".

Guterres urged nations to "find ways to allow for an injection of cash in the Afghan economy" in order to avert an outright collapse that would have "devastating consequences" for Afghanistan and the wider region.

"I don't think that if the de facto authorities of a country misbehave, the solution is to do a collective punishment to their people," he said. 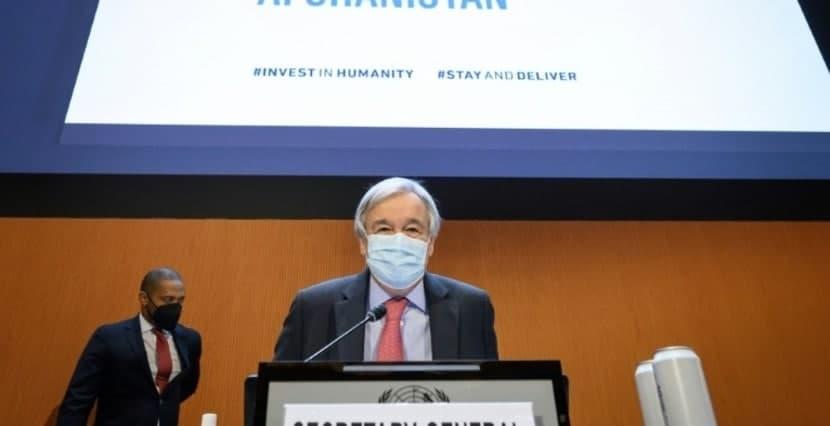