WASHINGTON, Sep 20 (Reuters) - The United States in November will re-open for air travellers from 33 countries including China, India, Brazil and most of Europe who are fully vaccinated against COVID-19, the White House said on Monday (Sep 20), easing tough pandemic-related travel restrictions imposed beginning early last year.

The decision, announced by White House coronavirus response coordinator Jeff Zients, marked an abrupt shift for President Joe Biden's administration, which last week said it was not the right time to lift any restrictions amid rising COVID-19 cases.

The United States had lagged many other countries in lifting such restrictions, and allies including Britain and Germany welcomed the move. The US restrictions have barred travellers from most of the world including tens of thousands of foreign nationals with relatives or business links in the United States.

Restrictions on non-US citizens were first imposed on air travellers from China in January 2020 by then-President Donald Trump and then extended to dozens of other countries, without any clear metrics for how and when to lift them.

The United States will admit fully vaccinated air travellers from the 26 so-called Schengen countries in Europe including France, Germany, Italy, Spain, Switzerland and Greece, as well as Britain, Ireland, China, India, South Africa, Iran and Brazil. The existing policy has barred non-US citizens who were in those countries within 14 days.

Zients did not give a precise start date beyond saying "early November".

Separately on Monday, the United States extended its pandemic-related restrictions at land borders with Canada and Mexico that bar nonessential travel such as tourism through Oct 21, while giving no indication if it would apply the vaccine rules to those borders.

The United States has allowed foreign air travellers from more than 150 countries throughout the pandemic. Its action on Monday means that new COVID-19 vaccine requirements will now apply to nearly all foreign nationals flying to the United States - including those not subject to the prior restrictions.

Critics had said that the US travel restrictions no longer made sense because some countries with high COVID-19 rates were not on the restricted list while some countries on the list have the pandemic more under control.

Americans travelling from abroad who are not vaccinated will face tougher rules than vaccinated citizens, including needing to show proof of a negative COVID-19 test within a day of travel and proof of purchasing a viral test to be taken after arrival.

Air travel restrictions and bans were imposed by many countries in a bid to slow the spread of COVID-19, devastating international travel and tourism and shaking the airline industry.

The US Chamber of Commerce business group praised the US announcement, saying "allowing vaccinated foreign nationals to travel freely to the United States will help foster a robust and durable recovery for the American economy". Airlines for America, an industry trade group, said that through late August, international air travel was down 43 per cent from pre-pandemic levels. 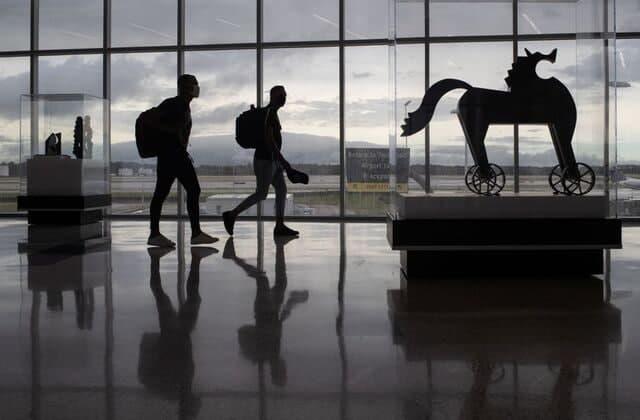