"The sides discussed in detail the disturbing situation around the stalling of the process of the settlement of the Ukrainian conflict. The three leaders noted the importance of the implementation of the 2015 Minsk agreements as the only settlement basis. They also stressed the importance of further coordination of Russia’s, Germany’s, and France’s efforts in the Normandy format," the Kremlin said.

Apart from that, Putin made "high-principled assessment of Kiev's policies of stubbornly dodging its obligations under the Minsk Accords and agreements of the previous Normandy-format summits, including the one in Paris (December 9, 2019)," it said.

The three leaders agreed to continue discussing a possibility of organizing a Normandy Four (Russia, Germany, France, Ukraine) summit. "Foreign ministers (of the four nations - TASS) will look at the possible organization of a meeting in the Normandy format at their level. It was also agreed to continue to use corresponding channels to look at a possibility to organize a Normandy summit if it is expedient," it said.

"Bearing in mind the difficult situation in the settlement of the conflict in southeastern Ukraine, the leaders asked their political advisers and foreign ministries to intensify contacts in the Normandy format," the Kremlin said, adding that the leaders also discussed a number of other international issues, including counter-terrorism efforts on the African continent.

Ukrainian President Vladimir Zelensky said earlier in the day that he had had a telephone conversation with Macron and Merkel to discuss issues of the Donbass conflict settlement and preparations for a Normandy Four summit.

Putin’s previous conversation with Macron and Merkel took place in the videoconference format on March 30. The Russian president then expressed concern over Kiev’s destabilizing actions in Donbass. 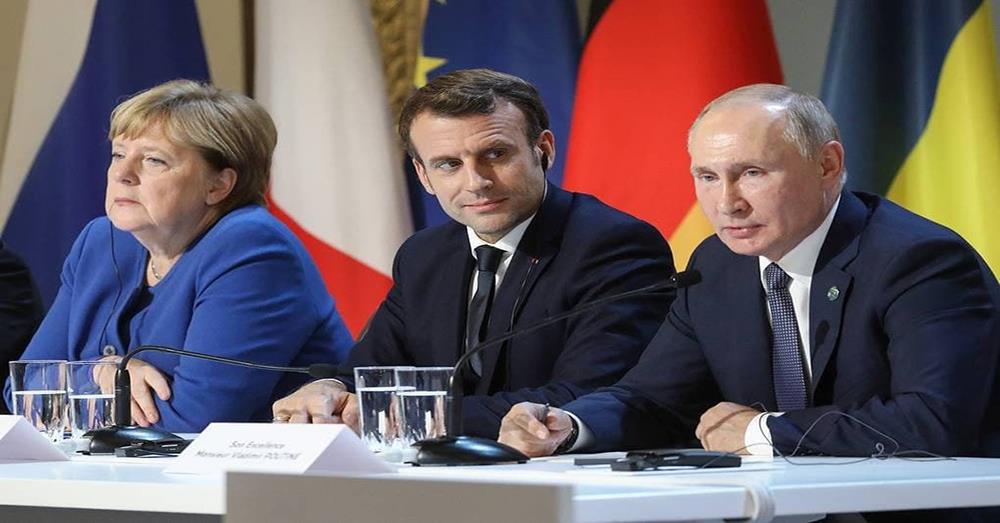