KYIV, June 16 (Reuters) - The leaders of the European Union's three biggest countries, Germany, France and Italy, are expected in Kyiv on Thursday to show their backing for Ukraine as it struggles to withstand a relentless Russian assault.

The visit by German Chancellor Olaf Scholz, French President Emmanuel Macron and Italian Prime Minister Mario Draghi has taken weeks to organise with the three men looking to overcome criticism within Ukraine over their response to the war.

The expected trip, which has not been announced for security reasons, comes a day before the European Commission is due to make a recommendation on Ukraine's status as an EU candidate, something the biggest European nations have been lukewarm about.

Speaking in Romania on Wednesday, Macron said it was time for Europe to reassure Ukraine over its EU ambitions.

"We are at a point when we need to send clear political signals, us Europeans, towards Ukraine and its people when it is resisting heroically," he said, without giving details.

Kyiv has criticised France, Germany and, to a lesser extent, Italy, for alleged foot-dragging in their support for Ukraine, accusing them of being slow to deliver weapons and of putting their own prosperity ahead of Ukraine's freedom and security.

"They will say that we need to end the war that is causing food problems and economic problems ... that we need to save Mr Putin's face," he said, referring to comments by Macron this month that it was vital not to humiliate the Russian leader.

Addressing this concern, Draghi said on Tuesday it was important for peace talks to open as soon as possible, but added they had to be "on terms that Ukraine deems acceptable".

Zelenskiy is expected to push his visitors to send more arms to help his hard-pressed army withstand the Russian invaders.

Ukraine has been particularly critical of Germany's military aid and the country's ambassador to Berlin, Andrij Melnyk, told German broadcaster NTV he expected Scholz to hand over heavy weapons that had been long-promised but not yet delivered.

Scholz has dismissed allegations he has held back much-needed military support, saying it was one of the biggest military and financial backers of Ukraine, and that it was taking time to train Ukrainian soldiers to use the sophisticated artillery systems that it was offering. 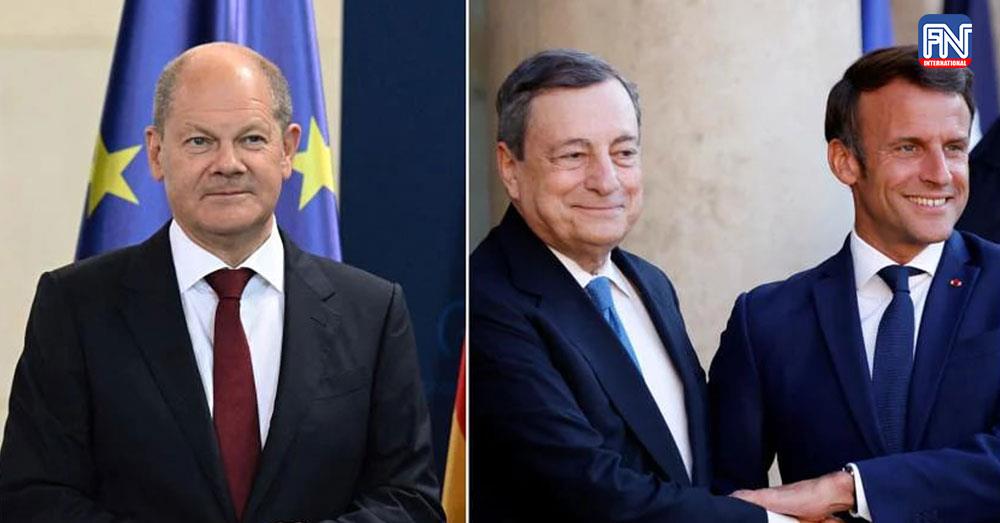