BRUSSELS, Sept 9 (Reuters) - The European Union will make travelling to the bloc more difficult and expensive for Russians from Monday after it formally backed suspending a visa facilitation agreement over Russia's invasion of Ukraine.

The Council of the EU, which groups the bloc's member states, on Friday adopted a decision to suspend from Sept. 12 the visa deal that has been in force since 2007.

A visa facilitation agreement gives privileged access to the EU for citizens of trusted partners.

"With its unprovoked and unjustified war of aggression, including its indiscriminate attacks against civilians, Russia has broken this trust and trampled on the fundamental values of our international community," the Council said.

Russia says its "special military operation" is needed to rid Ukraine of fascists, an assertion Kyiv and its Western allies say is baseless.

The move will result in an increase in the visa application fee from 35 euros ($35) to 80 euros, a requirement to present more documentary evidence, increased processing times and more restrictive rules for the issuance of multiple-entry visas.

Russia said on Thursday it would retaliate against the curbs, but would not close itself off from the EU. read more

EU foreign ministers agreed last week to suspend the visa deal but stopped short of backing an EU-wide visa ban for Russian tourists that Ukraine and several EU members had called for.

More than one million Russians have entered the EU through land borders since Moscow invaded Ukraine in February, most of them via Finland and Estonia, the EU's border agency said.

EU members Estonia, Latvia and Lithuania have, however, have agreed an entry ban on Russian citizens travelling from Russia or Belarus from mid-September, with some exceptions such as diplomats and truck drivers.

Direct flights between Russia and the EU were cancelled at the start of the conflict, limiting Russians' ability to enter the union. 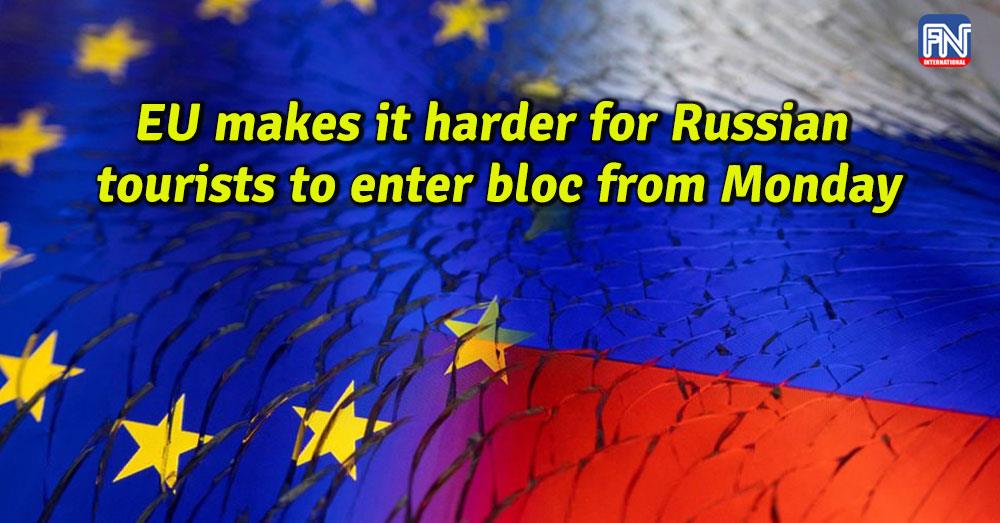