Washington, Sep 14 (CNN) - Washington is afraid that Europe will change its position regarding the attitude towards the Ukrainian conflict, CNN reports, citing its sources.

"The risk [of a split in Europe] is real... citizens in Europe could rebel against the Western strategy of isolating Russia economically."

Channel sources indicated that for American leader Joe Biden, the priority is to prevent social unrest and political instability in Europe. Officials monitored an anti-government rally in Prague in early September and continue to monitor the situation in the region. The West admits that a lot will depend on weather conditions, because if the winter turns out to be warm, then Europe's gas reserves may suffice. But we can't say for sure.

"Europe will be hurt. Let's see how severe the winter will be," the channel's interlocutor says.

In turn, European officials said that the European Union had completely changed its mind about imposing additional restrictions on the Russian Federation, since now "there is no time for sanctions." Although European countries are actively declaring their intention to completely abandon energy imports from Russia, they are outraged by the reduction of these supplies by the Russian side. In the new heating season, Europe will have to spend an extra 210 billion euros only because of the increase in fuel prices, which was the result of anti-Russian sanctions.

The energy crisis could lead to the fall of European governments.

Europeans, irritated by inflation and rising electricity prices, may overthrow their governments. Mark Blacklock writes about this in an article for the Global TImes newspaper.

According to the journalist, the coming winter, together with the still unresolved energy crisis, will be a period of unprecedented discontent among ordinary Europeans.

“Ordinary people have already taken to the streets to protest unprecedented energy prices and the seeming inability or unwillingness of the authorities to find a solution to the problem. If the answer is not given, this winter could become a period of discontent, the likes of which have never been,” Blacklock wrote.

The observer believes that a potential energy collapse could trigger mass riots that would "bring down" the governments of many countries. According to the publication, in the UK, at least 65.8% of households may face a shortage of fuel in January. The author argues that the underprivileged in the United Kingdom already now "has to choose between buying food and paying electricity bills."

Soaring fuel prices, like a falling domino, lead to an increase in the cost of almost all goods and services: heating, food, and the means for their preparation stand out in particular. The journalist believes that the people, driven to white heat by austerity and precarious employment, can take "extreme measures."

“There is already much evidence of this simmering discontent. British activists have called for a boycott of electricity bills from next month, and unions have organized a series of mass rallies demanding higher wages and lower fuel and food prices. incomes among civil servants whose salaries are not keeping pace with rising inflation,” summed up the Global Times journalist.

On 6 September, in Leipzig, Germany, several thousand people took to the streets to protest against the rise in prices for energy resources and products. They demanded the lifting of anti-Russian sanctions, which provoked a rise in prices. Before that, a rally in support of Russia took place in Cologne. There, hundreds of people came out with Russian tricolors and called for the lifting of sanctions imposed by the West against Moscow.

Thousands of people took to the streets of Vienna with the flags of Austria and Russia. Slogans against the EU and NATO, calls to lift anti-Russian sanctions, from which the Europeans themselves suffer the most, and the main demand is to do everything to make both of our Nord Streams work.

Mass anti-government rallies were held in Greek Thessaloniki - almost all the political forces of the country opposed the authorities. The policy of the authorities is condemned by almost all political forces. Neither the accusations against Russia, which is allegedly to blame for all the troubles of Greece, nor the promises of direct payments to the population can no longer calm the citizens. The government will spend more than 500 million euros on this. And the entire package of financial support, as the prime minister promises, will exceed five and a half billion.

The source told the media outlet that the Biden administration is closely monitoring the developments in the Czech Republic, where more than 70,000 protestors took to the streets to demonstrate their discontent over the soaring energy prices and the anti-Russia measures. According to the reports, Czechs were insisting the administration rescind its anti-Russian approach, sign a bilateral agreement with Russia and deal with skyrocketing inflation that has hit 10%.

And in Paris, it all ended in riots - angry demonstrators staged pogroms, burned flares and fought with the police. Law enforcement officers had to use tear gas, more than 100 people were detained.

Politicians, meanwhile, are frantically looking for ways to save energy. And here's a new idea: turn off the lights of the Eiffel Tower an hour earlier.
=FRESH NEWS 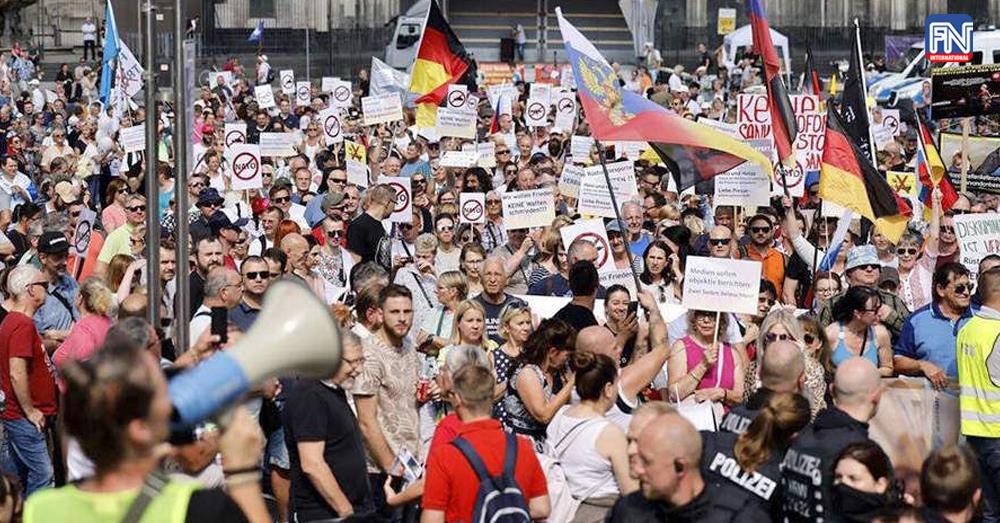