The Play “Breaking the Silence” to Tour Cambodia

Carrying a Message of Reconciliation

The stories told by the actors in “Breaking the Silence” were based on true accounts that people had shared with researchers of the Documentation Center of Cambodia (DC-Cam).

At the time, the Extraordinary Chambers in the Courts of Cambodia (ECCC) had just started its work and it would be years before Khmer Rouge leaders were convicted—Kaing Guek Eav alias Duch in 2010, and Nuon Chea and Khieu Samphan in 2014.

The play later aired on radio in the country. It was also performed in Rwanda in 2012 with two Rwandan actors joining the cast following the commemoration ceremonies of the genocide in that country.

This year, “Breaking the Silence” is being staged again in Cambodia as a DC-Cam project with an additional scene to take the last decade into account. It was presented in Phnom Penh on Jan. 11 and is to be performed in four provinces in the coming months.

“I think it is complementary justice to what ECCC cannot do,” said Youk Chhang, executive director of DC-Cam. “The court is not a healing reconciliation forum or a history classroom. But I think this is.”

The play deals with an issue little addressed in the country: That victims of the regime, which caused the death of more 2 million people, still live side by side with former Khmer Rouge. “At the village level, you know, survivors are mingled, both victims and perpetrators,” Mr. Chhang said. “How did it happen that Khmer killed Khmer,” asked actress Morm Sokly in a song at the start of the play.

“I have been ashamed all my life,” says Pok Sovanna who plays the role of a former Khmer Rouge nurse in one scene. “I have hope, little hope that I shall be forgiven.” To this, actress Chhon Sina responds “I try to forgive, I long to forgive. But we should never forget.”

A play based on true stories

With a cast that includes five actors, one singer who introduces the stories, a Khmer classical dancer and a musician who accompanies them on Cambodian traditional instruments, the play originally consisted of seven stories based on people’s accounts collected by DC-Cam researchers and shared with Annemarie Prins who wrote and directed the play. The story of the child soldier, for example, came out of about 100 accounts, Mr. Chhang said. The rape recounted in the play is also based on numerous testimonies of such incidents during the regime, he said.

As she was writing the play 10 years ago, the Dutch director had also met several people, with the assistance of DC-Cam, to hear their stories. She had then turned all this material into seven scenes. In the 2019 version of the play, Ms. Prins has added one scene featuring a young Cambodian of today.

Former victims and perpetrators living side by side

The play tells of the pain of those who were under the yoke of the Khmer Rouge during the regime that begun in April 1975 and ended in January 1979. A pain that putting on trial a few Khmer Rouge leaders has not alleviated.

The actors also address the difficulty some people face as they find themselves living side by side with those who had joined the regime that claimed the lives of more than 2 million people between April 1975 and January 1979. They also speak of the guilt that torments some of those former Khmer Rouge while others deny having committed any crime.
In the first scene, one character refuses to admit guilt. “We were ordered by senior leaders,” the character says.

In the following scene, however, a former Khmer Rouge nurse says how she has been haunted by regret for not being able to help patients and actually causing their death. “I know I should forgive,” actress Chhon Sina tells her. “But you killed my father and yelled at my mother.”

Today’s youth given a voice in the play

The eight scene added in this year’s version of the play features a young Cambodian representing Cambodians in their 20s or early 30s who have only known Cambodia in peace time. “Why all the fear? Fear of what and for whom? Why the endless guilt? Why the silencing,” actor Nen Phearith asks. “I respect you and your past, but I don’t want to drown in your sad memories.”

He then explains that, when he was a child, his father forbade him to play with the son of a neighbor who was a former Khmer Rouge. “He was trapped in his pain,” he says of his father, adding that he did disobey his orders and that the neighbor’s son still is one of his best friends.

“Endless hate makes a victim of the hater and very often of his whole family,” actress Pok Sovanna says in the scene. The play ends with Yin Vutha singing: “May all beings live in happiness and peace.”

The play is mainly performed by the same cast as 10 years ago, which comes with its challenges, they said. Khmer classical dancer Khiev Sovannarith who interprets the role of the monkey—a familiar figure in Cambodia—finds it somewhat challenging to portray this physically-demanding character now that he is 10 years older. “Sometimes speaking is not enough to show what happened [in a play],” he said. “My role is to give the audience a picture of each event that is taking place and is being described by the actor and actresses.”

At the first performance in January, the Cambodian audience quickly connected with the monkey character, with some people mentioning that it helped them follow the story. Still, Mr. Sovannarith feels rather drained after each performance, he said.

Actress Pok Sovanna, who is now 57 years old, said she has been concerned about forgetting her lines this time around. However 10 years ago, she said, “my tears would pour down my face because the story told is what I went through [during the Khmer Rouge regime]. So my performance was not good sometimes.”

Actually, Ms. Prins said, all the performers have matured into their roles and now deliver an even stronger performance.

Enthusiastic reactions from the audience

The audience on January 11 included Cambodian students from grades 10 to 12, students from the National Institute of Education (NIE) and teachers, as well as people who lived through and survived the Khmer Rouge regime.
“I have seen this kind of show many times, but this is the first time that it’s being creative, and instead of telling one story or [focus on] one person, they actually [present] different stories connecting them to each other, and also create a link between the present and the past, and whether you should blame or not,” said Von Sal, an 11th-grade student at Liger Leadership Academy in Phnom Penh. “I want more students to know about this…understand not only the victims, but also other people who experienced those things.”

Kan Phan Sy, who is pursuing a higher-education degree in Khmer literature at the NIE, said that she had learned about the Khmer Rouge regime in school and from her parents who greatly suffered during that period, which is why she has always hated the Khmer Rouge. But hearing the low-ranking Khmer Rouge’s story—that of the nurse—in the play made her reconsider matters.

“[A]s soon as the performers started to walk towards the stage [they arrived from the back of the theater], I got goosebumps,” said Som Vicheth, a grade-12 history teacher in Kandal province. “Their performance, the script and the preparation were good, especially the monkey role, which supported the individual stories.”

Some students don’t even believe that what is said about the Khmer Rouge actually took place, he said. “Dark chapters of history can be taught to students so that they can avoid [repeating it] and instead do something positive.”

Pheng Pong-Rasy, director of the Preh Veng Documentation Center and the Genocide Education Center, agreed with the importance of education to make sure the genocide will not be repeated. “The tribunal, which has almost ended…cannot bring justice to all people of Cambodia.
“If the tribunal cannot bring you justice, what can you do in your own community? So education is the best. We encourage villagers to talk about their experience…and the young generation can learn from their experience and then share…and do research. This is also justice.”

Among those in the audience, opinions vary as to whether all the Khmer Rouge should be forgiven. Tin Mohammat who was in his 30s during the regime believed that the play carries an important message to be passed on to today’s youth. As to forgiveness, he draws the line at higher-ranking Khmer Rouge. “I want perpetrators to be killed like the people they killed,” he said.

Oung Vanna who also was in her 30s during the regime leans towards reconciliation. Speaking of the play, she said, “I love that last song the most: River of Blood, River of Reconciliation, River of Responsibility. It is my favorite scene. I want this performance to continue to spread its wisdom at the national level [for] national reconciliation.” 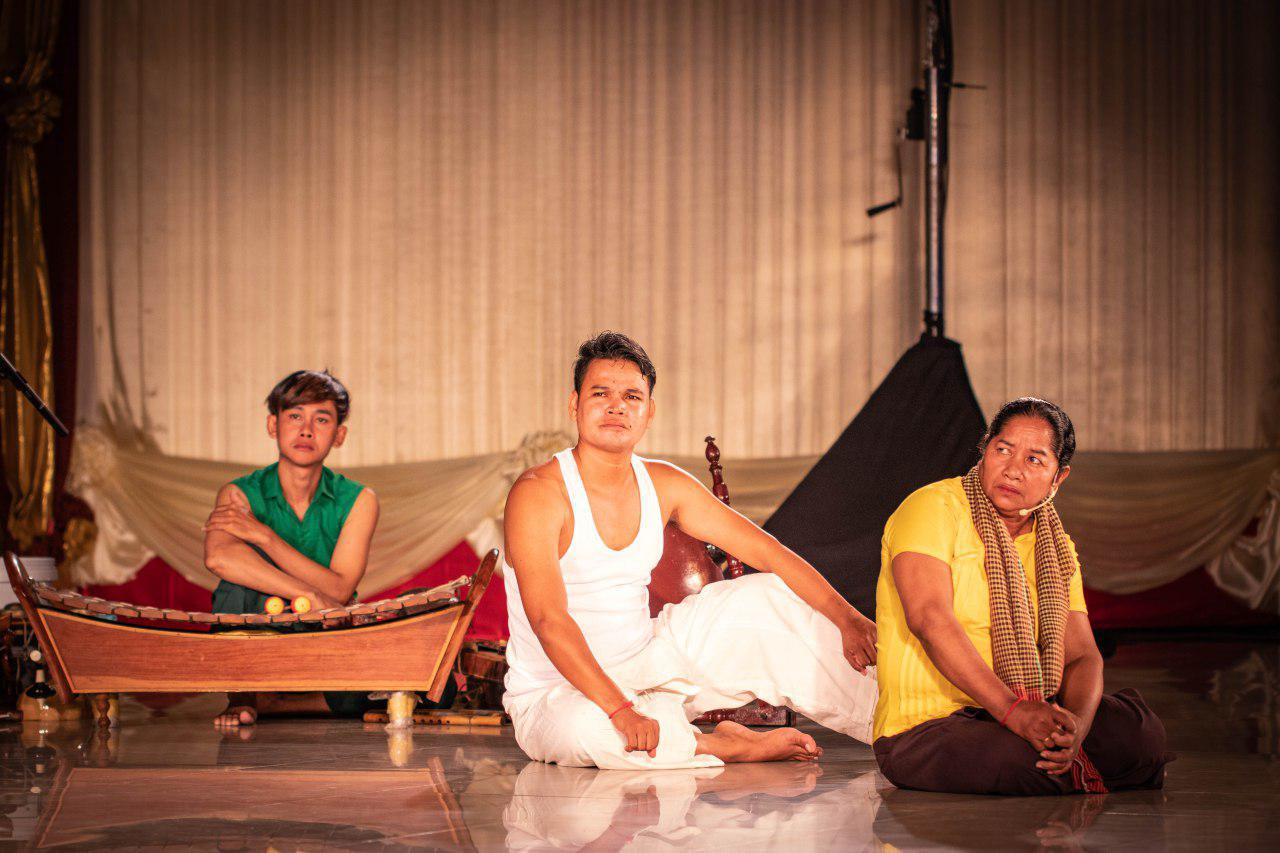 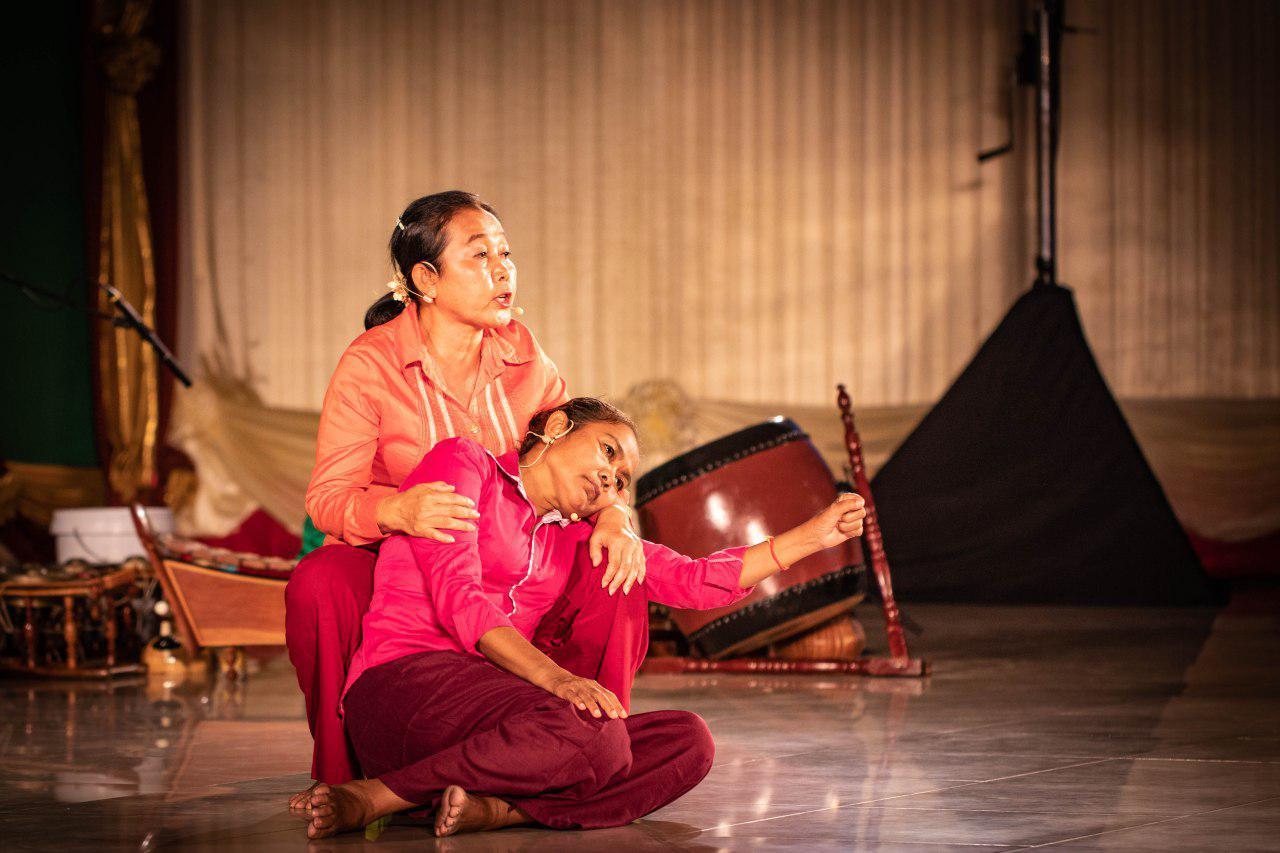 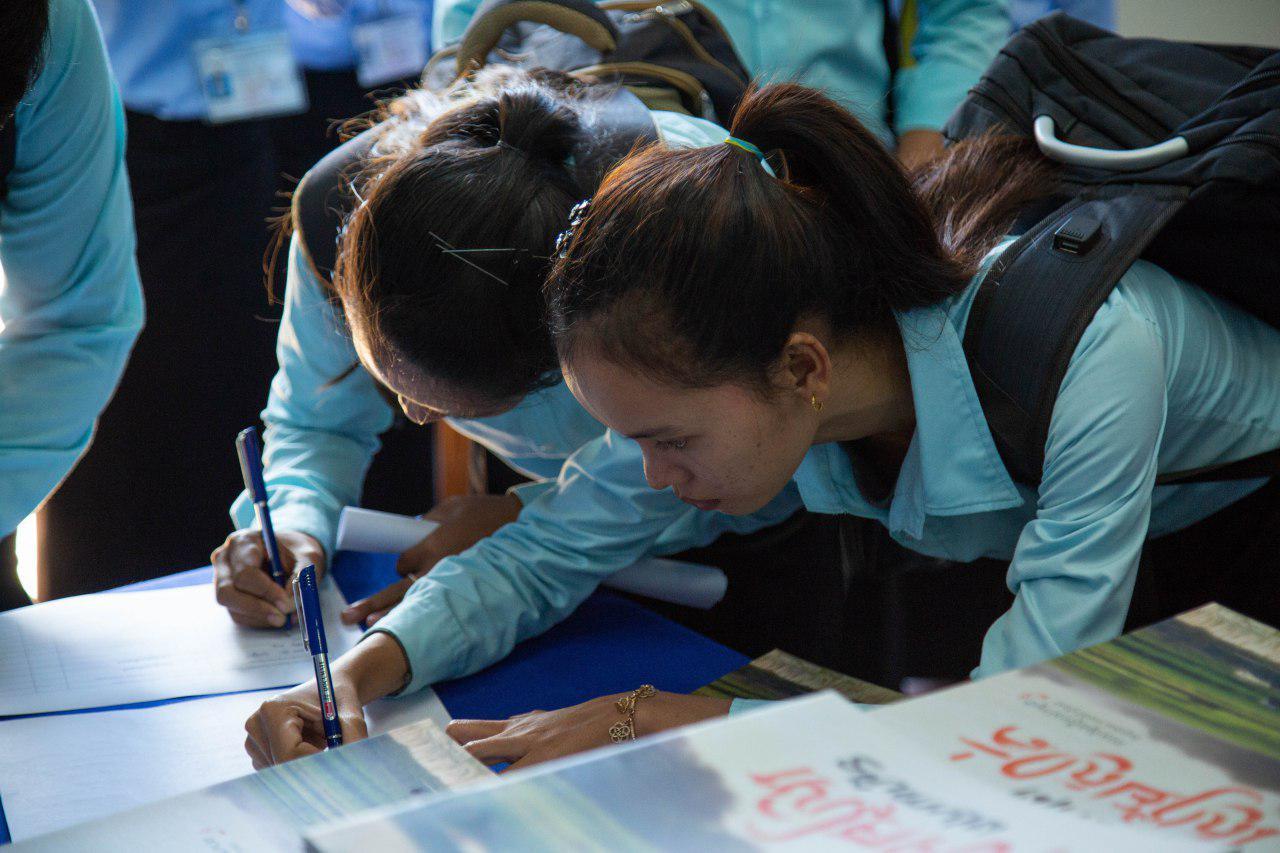 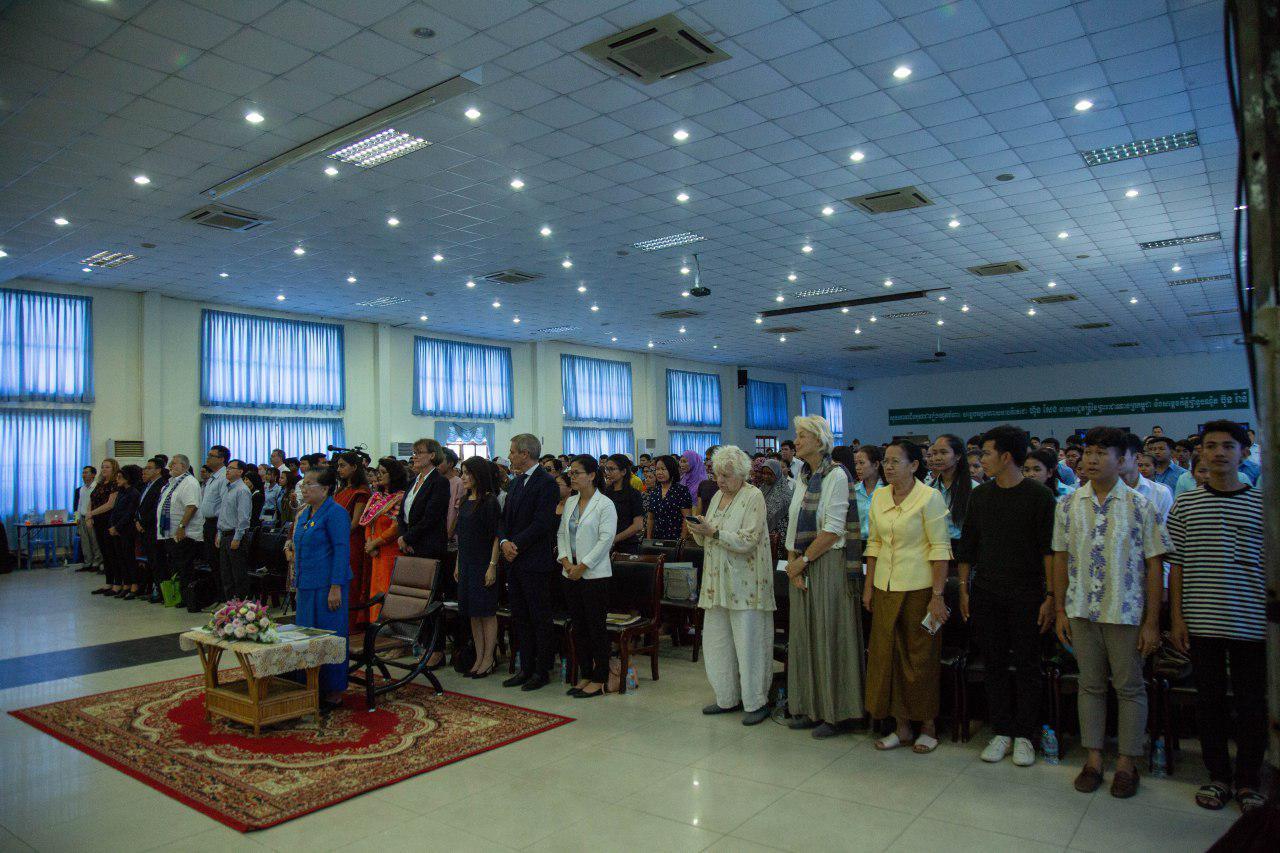 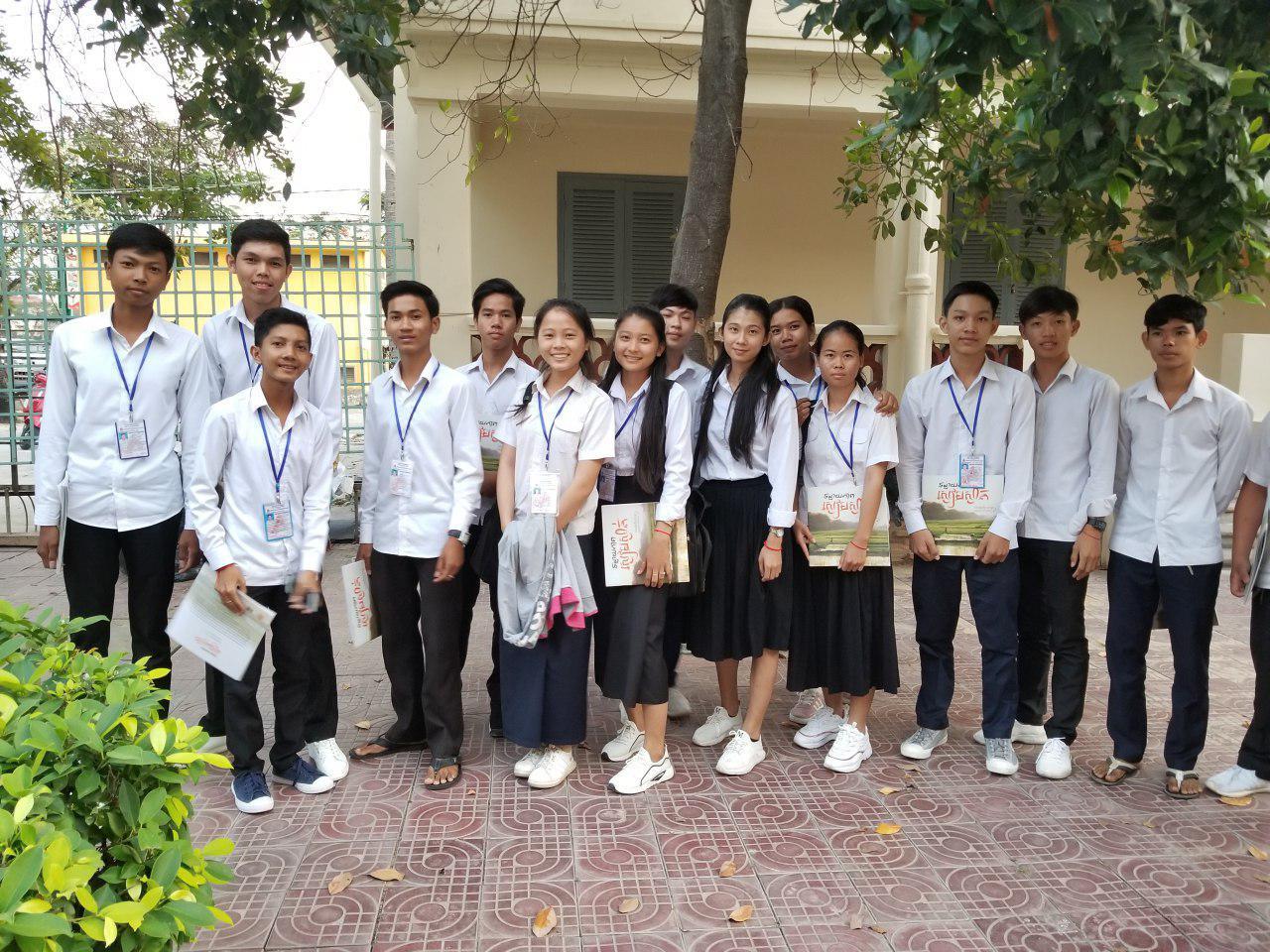 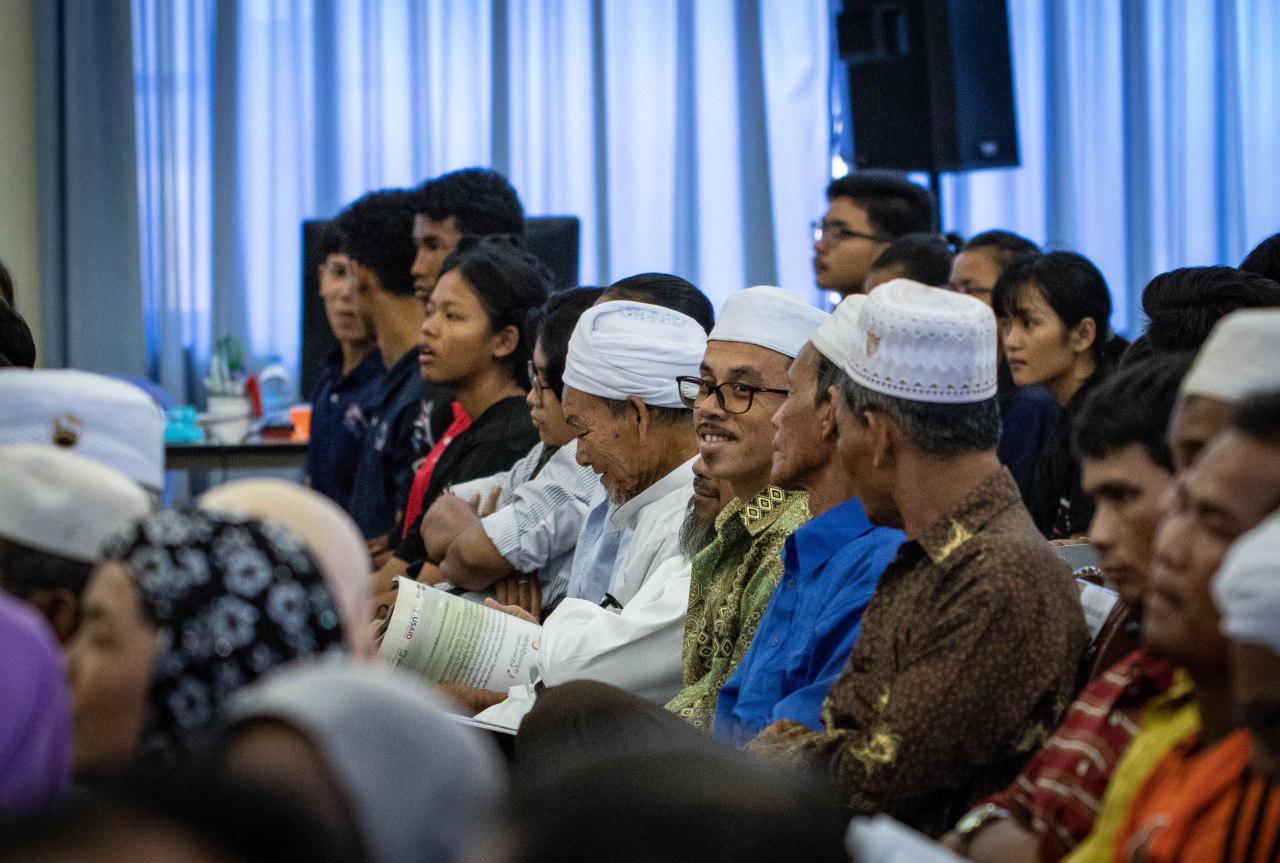