If Cambodia to Lose EBA, It’d be in mid-2020, Says Cambodian Rice Exporter

Saran believed that if Cambodia were to lose EBA, it would be in mid-2020, not these days.

The rice exporter’s statement was made shortly after European Commission’s announcement dated 11 February 2019 to begin the process that could lead to the temporary suspension of Cambodia's preferential access to the EU market under EBA.

“The EU has yet removed EBA from us; EBA will not be taken away from us provided that our human rights and labour rights improve,” Saran told Fresh News.

“I believe EU is Cambodia’s friend, thus they will support the kingdom to take critical steps to maintain EBA status,” he added.

According to EU’s press release, launching the temporary withdrawal procedure does not entail an immediate removal of EBA; the process is as follows: a six-month period of intensive monitoring and engagement with the Cambodian authorities; followed by another three-month period for the EU to produce a report based on the findings.

The press release added that after a total of twelve months, the Commission will conclude the procedure with a final decision on whether or not to withdraw tariff preferences; any withdrawal would come into effect after a further six-month period. According to the EU GSP Regulation, either a full or a partial removal of preferences is possible.

The Everything But Arms arrangement is one of the EU's Generalised Scheme of Preferences
(GSP), which allows vulnerable developing countries to pay fewer or no duties on exports to the EU, giving them vital access to the EU market and contributing to their growth. The EBA scheme unilaterally grants duty-free and quota-free access to the European Union for all products (except arms and ammunition) for the world's Least Developed Countries, as defined by the United Nations. The GSP Regulation provides that trade preferences may be suspended in case of "serious and systematic violation of principles" laid down in the human rights and labour rights Conventions listed in Annex VIII of the Regulation.

The EBA arrangement, as the GSP scheme as a whole, aims to assist developing countries in their efforts to reduce poverty, promote good governance, and support sustainable development by helping them to generate additional revenue through international trade.

How important is the EBA to Cambodia's economy?

The EU is Cambodia's largest trading partner, accounting for 45% of Cambodian exports in 2018. Exports to the EU single market reached €4.9 billion in 2018 – almost double the €2.5 billion recorded in 2013, according to the EU Commission’s fact sheet.

“95.7% of Cambodian exports entered the EU market under EBA tariff preferences (i.e. €4.7 billion out of the €4.9 billion in total) - one of the highest ratios of any EBA beneficiary country.”

Overall, Cambodia is the second largest user of EBA preferences, behind only Bangladesh. Exports of textiles and footwear, prepared foodstuffs and vegetable products (rice) and bicycles represented 97% of Cambodia's overall exports to the EU in 2018.

As representatives of Cambodia's private sector, workers, and international civil society, we would like to express our deepest concerns in respect to the process to withdraw preferences to the Kingdom of Cambodia under the Everything But Arms, according to the joint statement issued by President of Cambodian Chamber of Commerce dated 21 January 2019.

“The decision will impose serious economic damage on Cambodia and would neglect the tremendous efforts undertaken by the Cambodian private sector to align its values and policies with the economic model championed by the European Union,” the statement wrote.

“Withdrawal of this arrangement will jeopardise this progress, by directly harming the livelihood of millions of workers and their families that rely on employment within the garment sector, placing them once again at risk of returning to poverty. This is most concerning for Cambodia's rural women, who make up 85% of the 700,000 garment workers, and therefore most likely to suffer the hardest from the social and economic repercussions of any change to the status quo. The cumulative effect of this will threaten the income of another three million people, including dependents and service providers from the hospitality, transportation, and accommodation sectors.
“We appeal to the European Commission and European Member States to continue its unwavering support of Cambodia's development by refraining from taking any action that will harm the interests and livelihoods of the country's people,” the statement continued.

Cambodian Strongman warns EU of third mistake against the kingdom

Cambodian Prime Minister Hun Sen told former Irish Premier Enda Patrick Kenny that it would be EU’s third mistake against Cambodia if the EU withdrew the Everything But Arms (EBA) preferences from Cambodia as lobbied by the opposition groups, during the courtesy call on 13 January at the Peace Palace, Phnom Penh.

“The EU’s first mistake was supporting coup in Cambodia during 1970s; the second was supporting Khmer Rouge to occupy the UN seat for 12 years; and the third, even the EU just decided to set in motion the formal procedure, once realized, it will become the third mistake of EU’s democratic countries against Cambodia,” the premier stated.

What analyst says about removing EBA from Cambodia

Cambodia watcher based in Phnom Penh Thomas Fowler stated that the EU would commit a serious mistake if it decides to remove EBA from Cambodia. The EU should instead continue to help Cambodia to develop its economy and gradually build democratic governance. Cambodia can be the bridge and beacon of democracy in the Mekong region as no country in the GMS is currently implementing a democratic system better than Cambodia.

The European Union is an important market for Cambodian rice. In 2018, Cambodia exported nearly 300,000 tons of rice to Europe, an equivalent to 43% of the total export volume of 620,000 tons.

The Ministry of Commerce, on 18 January 2019, expressed regret over EU’s tariff imposition on Cambodian rice; and considered the measure “a weapon to kill Cambodian farmers”.

The ministry announced to protest against the decision in accordance with international legal and trade rules, according to the ministry’s press release. The ministry said that the EU's decision on 17 January 2019 did not fully reflect international trade rules, technical standards, truth, and good relations and cooperation between Cambodia and EU.

“The EU’s decision will murder Cambodian farmers and families in debt of credit institutions.”

In the statement, the ministry also confirmed that it is reviewing the decision based on legal aspects and international trade rules to continue pleading with the decision that the people of Cambodia felt unjustifiable.

Ministry of Commerce called on the European Commission to review its decision based on international trade rules and good traditional cooperation between Cambodia and the European Union.

It’s worth noting that the EU has begun to impose import taxes on rice of Cambodia and Myanmar, which are exported to 28 member EU Member States, for a period of three years from 18 January 2019-2021. The tax will cost Cambodia 175 euros per ton in the first year, 150 euros the second year, and 125 euros the third year.

The EU’s decision on Cambodian rice was made after complaints from Italy and Spain, saying Cambodia and Myanmar rice imported into Europe had affected their producers. 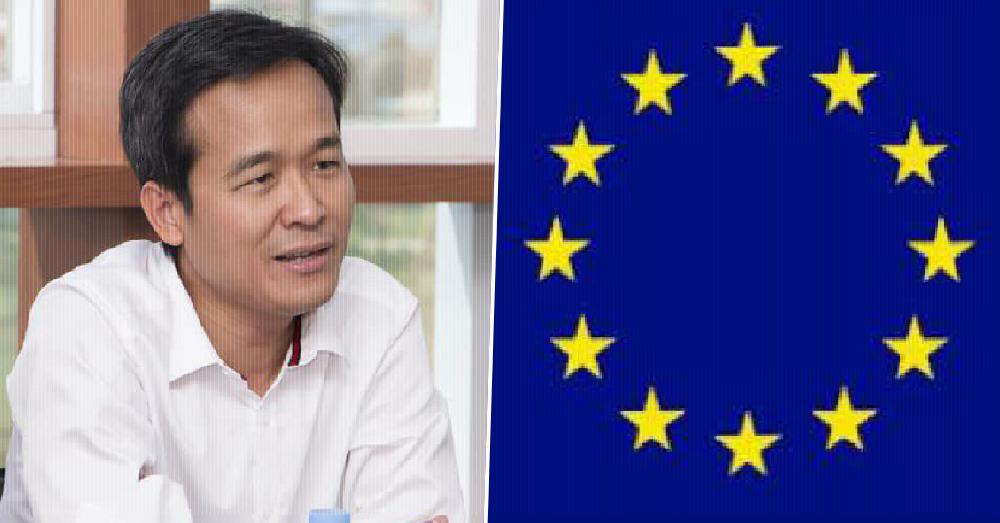 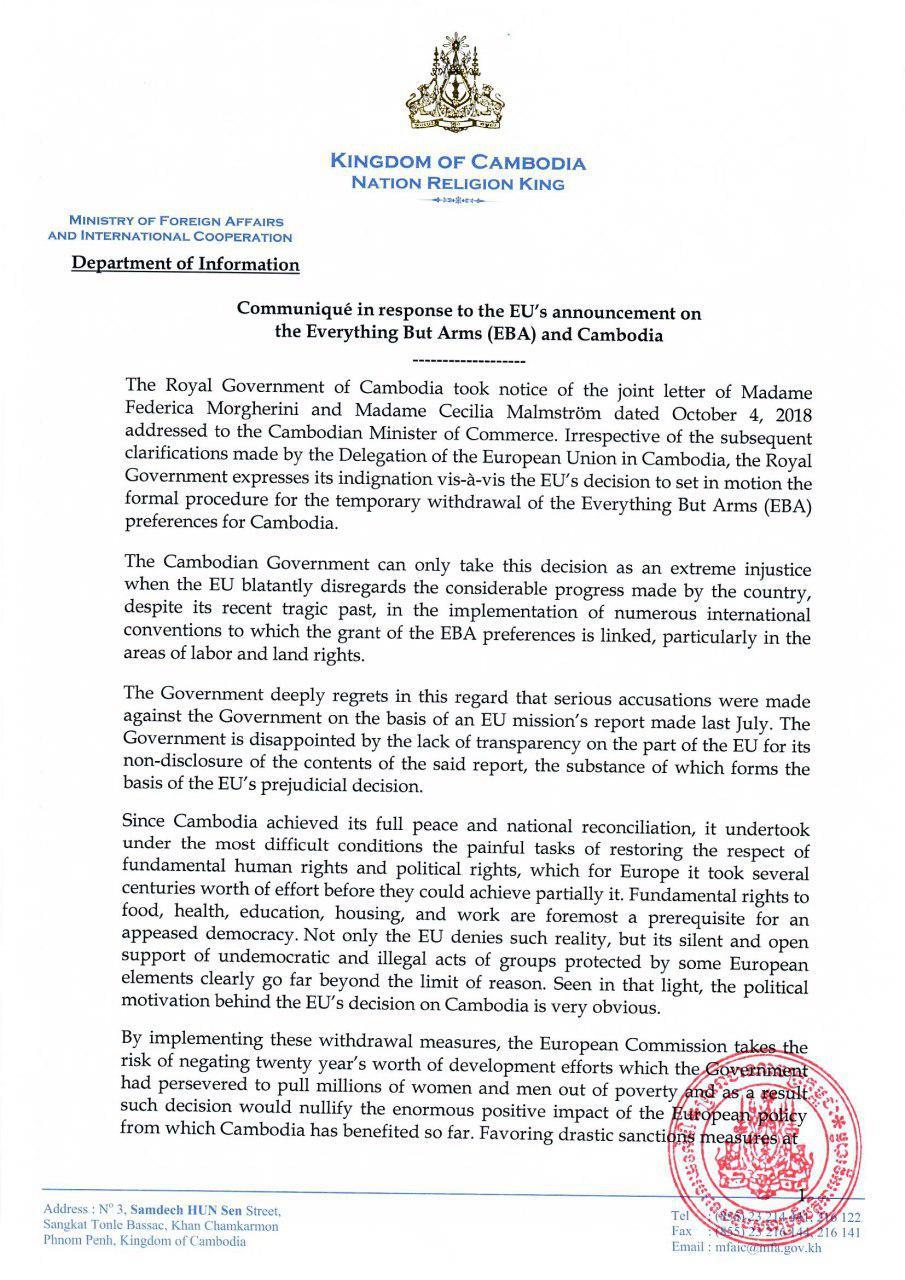