Phnom Penh (FN), Feb. 12 - Garment Manufacturers Association in Cambodia (GMAC) calls upon the European Commission and EU Member States to thoroughly assess whether such a procedure potentially resulting in the suspension of preferential tariff arrangements under the Everything But Arms program would be proportionate and ultimately strengthen democracy and human rights in Cambodia, according to its statement dated Tuesday.

According to GMAC, the garment, footwear and travel goods sectors comprise the largest share of Cambodia’s exports toward the EU with € 3.76 billion out of total goods imports of € 5 billion in 2017. Cambodia has enjoyed EBA status, and consequently 0 percent tariff on its exports to the EU since 2001 and since then has managed to double its exports to the EU, building a strong and vibrant economic sector which now employs 700,000 workers, mostly from rural areas, of which 80 percent of women.

“We are now proud to be the EU’s 6th biggest garment supplier, behind China, Turkey, Bangladesh, India and Pakistan. EBA participation has alleviated poverty and built a culture of compliance and due diligence in the garment and footwear sector,” GMAC wrote.

This long-term trade partnership with the EU was built on the shared idea that trade would help develop our society and community. Being aware that EBA is conditioned by the respect of international standards, GMAC has since 2001 worked hand in hand with the International Labor Organization, International Finance Corporation, and the “Better Factories Cambodia” program, engaging with workers, GMAC members and government to assess and improve labour standards and working conditions in Cambodian garment and footwear export factories.
As a result, the 2018’s Better Factory Cambodia transparency database report assessed factories’ compliance with 21 critical issues identified to reflect the essential rights of every worker. It was found that 91 percent of the factories assessed were in compliance with 18 to 21 of the critical issues, while the percentage of factories with low compliance rating dropped to 2 percent in 2018 in BFC’s latest 2018 report.

According to Mr. Ken Loo, GMAC’s Secretary-General, “GMAC participation in the BFC program has contributed in developing a culture of transparency and compliance with international working and labour standards.”

GMAC will keep working closely with its members to further improve industrial relations by supporting making registrations for unions simpler and more transparent in every factory. Based on the sole performance of our sector, GMAC therefore believes that an EBA suspension is neither warranted nor justified.

The threat of EBA suspension

A suspension of EBA, will increase tariffs by 12 percent in the garment sector and by 8 to 17 percent for footwear products. The competitiveness of our sector will unduly be put at risk, the reputation of our industry will be harmed, and Cambodia’s development will be halted. All efforts made in building a responsible garment supply chain will be jeopardized and it will be a dramatic setback for workers, especially those from rural communities.

Therefore, GMAC asks the European Commission, Member States, and the European Parliament to carefully evaluate the social and economic impact on Cambodian workers of EBA suspension. GMAC also urges the EU to continue engaging with Cambodian authorities to find a responsible political solution for all parties during that timeframe.

Meanwhile, GMAC looks forward to further engagement with European decision makers on this issue and to demonstrate the sector’s compliance with international standards.
=FRESH NEWS 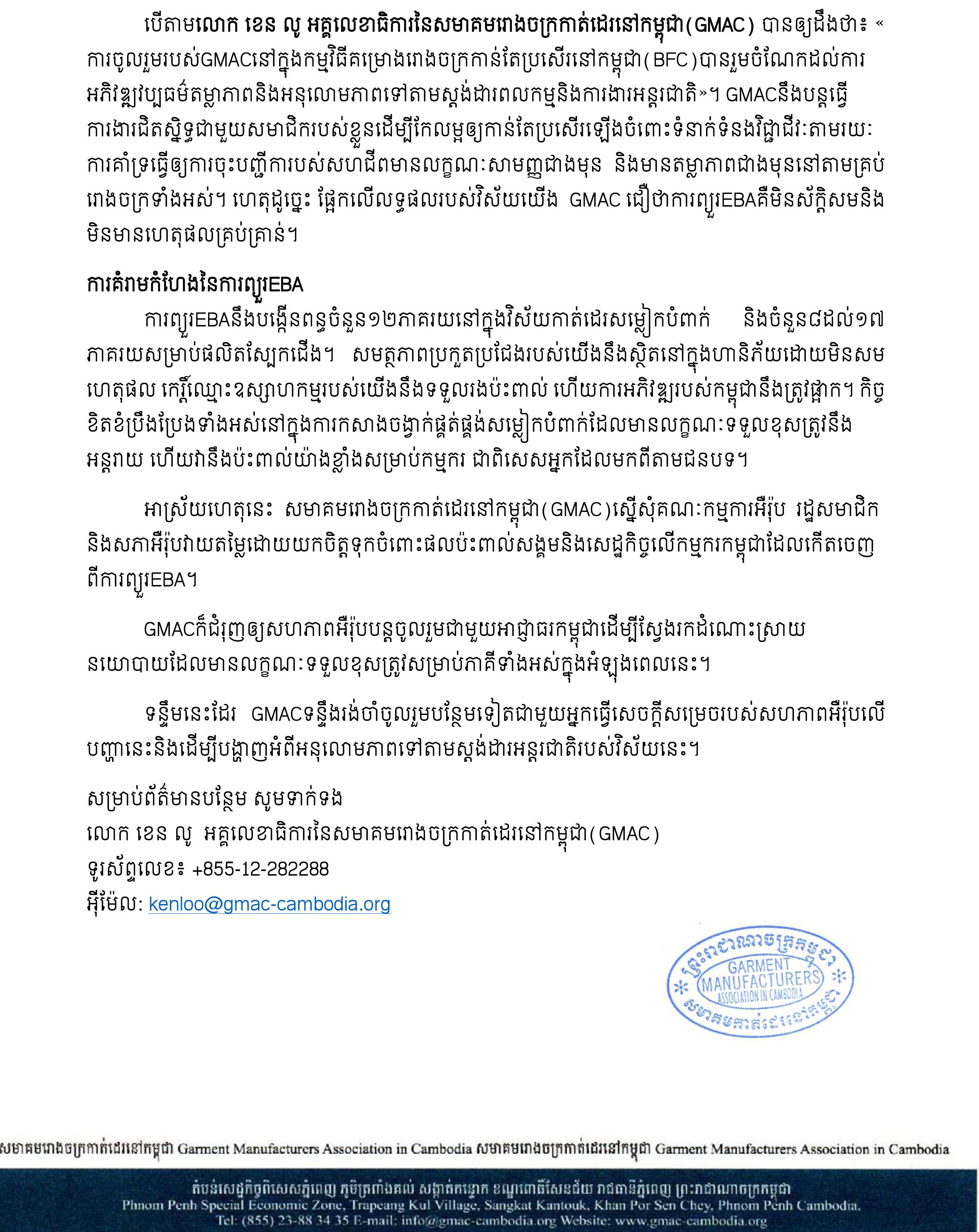