Phnom Penh (Xinhua), May 9 -- Cambodia on Thursday exported its first batch of bananas directly to China as part of increased cooperation between the two countries within the framework of Belt and Road Initiative.

Cambodian Agriculture Minister Veng Sakhon and Li An, economic and commercial councilor of the Chinese embassy in Cambodia, attended a ceremony here marking the first shipment of the kingdom's bananas to China.

"It is another milestone in agricultural cooperation between Cambodia and China, particularly under the Belt and Road Initiative," Sakhon said, expressing his profound gratitude to China for opening its market broader for Cambodian agricultural produce.

"It will not only help boost bilateral trade volume, but also importantly contribute to improving the livelihood of rural Cambodians through job creations," he said.

The minister said the Southeast Asian country is expected to export about 130,000 tons of yellow bananas to China in 2019.

Li said it was a new achievement in agricultural cooperation and would contribute to boosting trade volume between the two countries.

"This is another fruitful cooperation between Cambodia and China," he said. "I'm strongly confident that the export of bananas to China will boost the development of Cambodian agriculture and will bring great benefits to Cambodian farmers."

Ngin Chhay, director-general of Cambodia's General Directorate of Agriculture, said the export came after the two countries signed in August last year a protocol of phytosanitary requirements that paved the way for the export of yellow bananas from the kingdom to China.

He added that last month, the General Administration of Customs of China approved the first five Cambodian banana plantations, along with their five packing factories, to export the bananas to China.

"Today, we export, for the first time, five containers of more than 100 tons of the bananas to Shanghai directly from the Sihanoukville Autonomous Port," he said.

Cambodian Ministry of Commerce Under Secretary of State and Spokesman Seang Thay said it was a new positive step in agricultural cooperation between the two countries.

"It's good news. First of all, I would like to thank the Chinese government for agreeing to sign the MoU with Cambodia, allowing Cambodian people to export bananas (to China). This is the fourth agricultural product that we signed with China, to export to China," he said.

Phe Hok Chhuon, chairman of Longmate Agriculture, said the company has planted bananas on the land of more than 400 hectares in southwestern Kampot province and will expand its plantation to more than 1,000 hectares in the future. 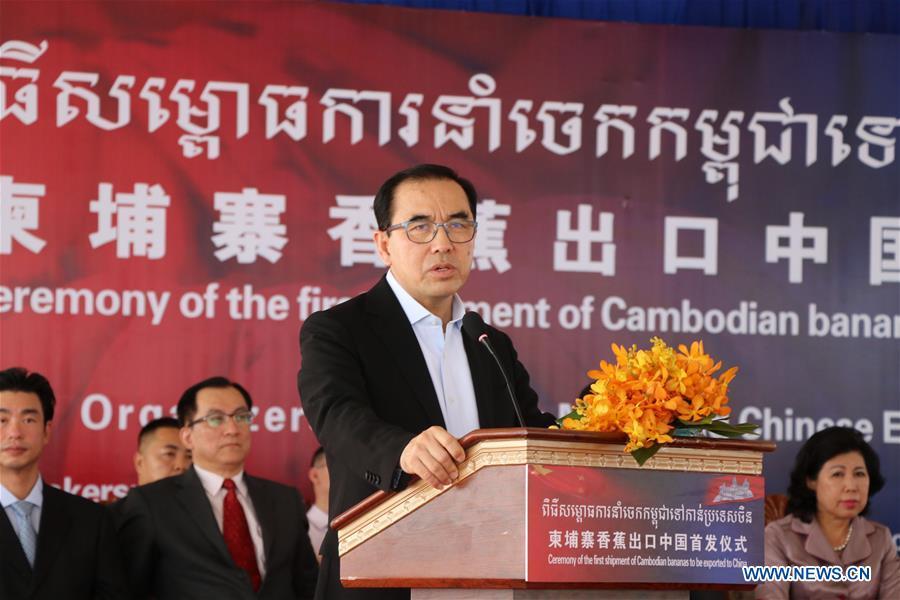