Phnom Penh (FN), July 24 -- On its front page of the publication dated July 22nd, 2019, US’s The Wall Street Journal, based only on an anonymous US official, claimed that Cambodia and China had entered a secret agreement which allowed Chinese military to use Cambodia’s naval base. It continued that the deal gave Chinese military the exclusive use for their soldiers in the Cambodia’s west coast base, where a nearby enormous airport, being built by a Chinese company, was believed to allow China to use it as its military base for 30 years for stationing soldiers, storing weapons and pitstop. Such fake news was denied immediately by the Prime Minister and Minister of Defense of Cambodia, both claiming that it was ridiculous and the ‘worst’ fake news fabricated by US officials about foreign military bases in Cambodia, and, even worse, it was spread by their partner media with the aim to ruin Cambodia’s and regional security and peace.

As a Prime Minister of a sovereign and independent State, SPM Hun Sen states that ‘it was the worse fake news against Cambodia. No such thing happened since a foreign military base will be in full contradiction to the Cambodia’s constitution.’ ‘What does Cambodia need Chinese military presence in its territory for? We have never had any discussion with the Chinese leader, let alone the signing of an agreement,’ he added clearly. ‘Now, it’s time to stop such distorted news about China’s military presence in Cambodia against us,’ added he.

Cambodia’s SPM Hun Sen and top military brass have issued numerous public announcements, denying the issue and clarifying that Cambodia is an independent and sovereign state, and that Cambodia’s constitution does not allow any foreign military base on its territory. Samdach Pichey Sena Tea Banh, Minister of Ministry of Defense, reacted to the groundless and political-motivated fake news, set up by the US, by claiming that ‘...because they think Cambodia does not serve their purposes. What they alleged, including the news about Ream naval base and other places were baseless. So, they made up the stories to serve a small group’s political ambitions.’

Foreign media’s news reports which cited some US officials and a handful of former oppositions were clearly on purpose, since those sources were more likely to do everything to hinder Cambodia’s development and the quest of the Cambodia’s government led by relentless SPM Hun Sen to lift the nation from poverty and to safeguard the nation’s peace and political stability, following decades of civil wars.

What is remarkable is that every times Cambodia’s Royal Arm Force joint in military drills with any countries, not just with Chinese military, some superpowers tended to be upset, probably because they were worried that Cambodia were able to strengthen its arm forces and they were more capable of safeguarding their nation. The superpowers, therefore, tried every single way to frame, exaggerate and inflate the situations, making Cambodia’s image looked “dark and gloomy” and destined to deserve nothing but sanctions. It was unbelievable that a case of Ream’s naval base renovation was turned “heated” by the that superpower, with allegation that Cambodia’s reject of their offer for renovation assistance was because the naval base was granted to Chinese military.

One would ask why officials from the US Embassy to Cambodia, as well as officials in the US, have fabricated news against Cambodia again and again? Actually, it was clear that the fake news or news based on false sources made by the US officials or the spreading of fake news against Cambodia by their aligned, unprofessional journalists from The Wall Street Journal and the small group of former oppositions has ill purpose. It was evident that their purposes include:

1) To strengthen their geo-political position in the region to compete with Superpower China. They clearly came with ill intention. They would try every single way to frame and pressurize any countries that have not served their interests, but would remain “silent” to any countries that have served their interest – they even praised them with “full of freedom and democracy,” despite being Communist states. For Cambodia, which they believed they cannot clean “brain” to serve their geo-political position, they have framed and have never accepted what Cambodia has done “correct” though Cambodia consistently sticks with the principles of democracy, human rights and freedom of speech and has maintained “better” relationship with other nations than some of the US’s allies have.

2) To assist a handful of former, self-expelled oppositions who have been executing “color revolution” in a bid to confuse, anger and incite Cambodian people. That’s why there were many fake news against Cambodia, such as the ones on the presence of foreign military in Cambodia’s territory, human right abuses, democracy, money laundry, human trafficking and corruption. These were the excuse which allowed some US lawmakers to enact an act against Cambodia or call for sanctions and political pressure against Cambodia. At this point, Cambodia stress clearly that it would not “risk trading” national sovereignty and independence with any assistance or support.

We still remember a case of fake news in early 2000 when international community, led by the US and the UK, had fabricated news on nuclear weapon in Iraq. Ultimately, officials from the two nations had confessed that there were no weapon of mass destruction in Iraq, and their target was to overthrow Saddam Hussein, who they alleged as a dictator. Such news has been fabricated and echoed by US’s media network in attempts to topple leaders of some Arab nations, including Syria and Libya, to name a few. The fake news led to a series of social riots and “color revolutions,” which saw their leaders overthrown from power, citing human rights and democracy. Any leaders who they believed did not follow their path or obstructed their interests were toppled.

What were left in those countries, namely Iraq, Syria, Libya and a number of other countries, were destructions, death toll, riot, trauma and civil wars. US President Donald Trump stated that the US would no longer employ its policy of overthrowing other nations’ leaders. But why do some US officials not follow their president’s promise and instead carry on implementing the invasion’s policy to destroy other countries like that? They used media to frame another country and to make fake news went viral – an unprofessional act in journalism. President Donald Trump even claimed that US media outlets, such as CNN and The New York Times, failed in their professionalism, publicized fake news and were people’s enemy. These were concrete clues one can assume that The Wall Street Journal was a factory for producing fabricated, exaggerated, and ill-intended news.

What the US officials and unprofessional journalists from The Wall Street Journal should understand are:

1) Cambodia’s constitution, the nation’s top law, does not allow foreign military base on its territory. It is therefore the news about military deal was faked or was political-motivated and was made up by the US officials for the sakes of political interests.

2) Cambodia has declared its stance to safeguard its own constitution and to not allow any foreign military base on its territory, regardless of the present or the future. China’s Ministry of Defense has also denied the presence of Chinese military base on Cambodia’s territory during recent Defense Ministers’ Meeting in Singapore. Hence, the US officials and unprofessional journalists should stop framing campaigns against Cambodia and allow Cambodian people to live in peace and development like in the present.

Cambodia does not want wars because the past has taught Cambodian people to stay away from them, while there were still tons of US’s remnants, cluster bombs and mines not having been removed from Cambodia’s land yet. 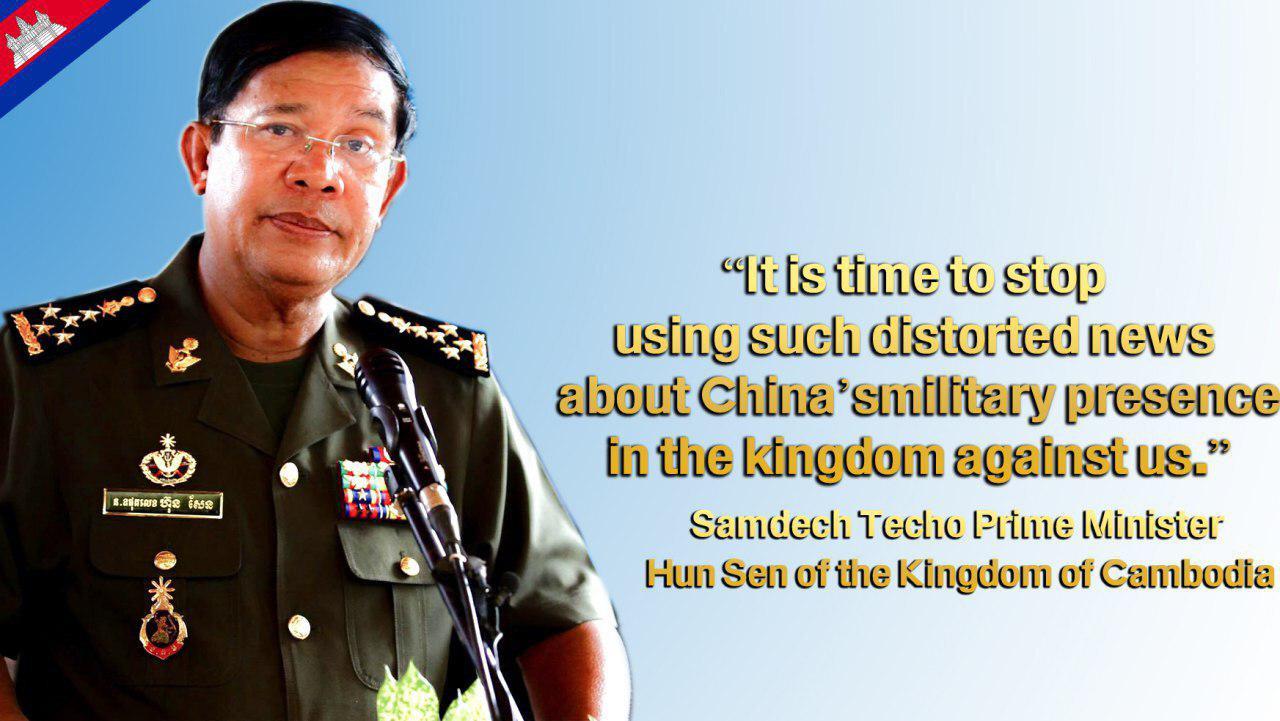 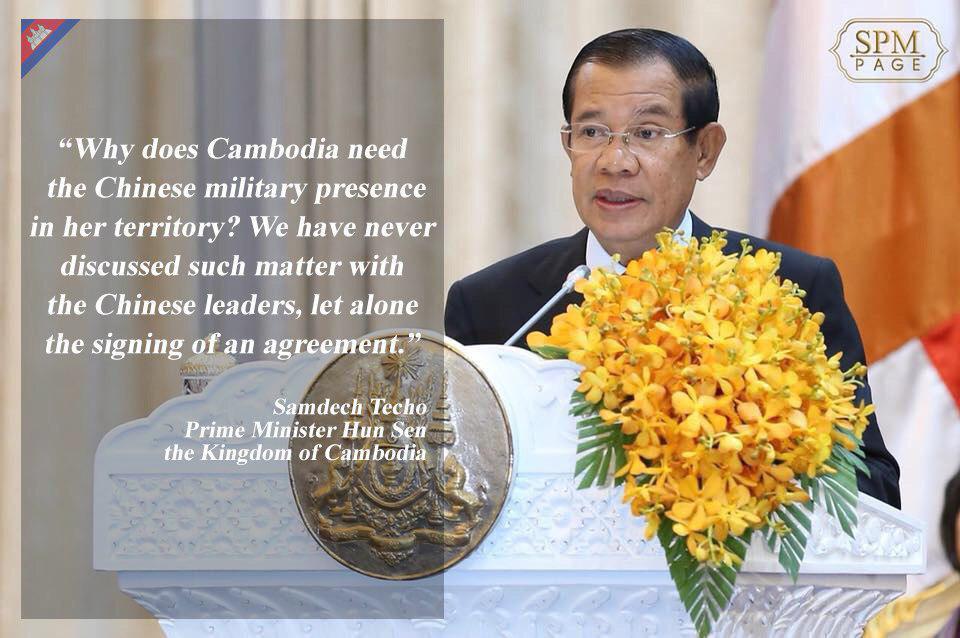 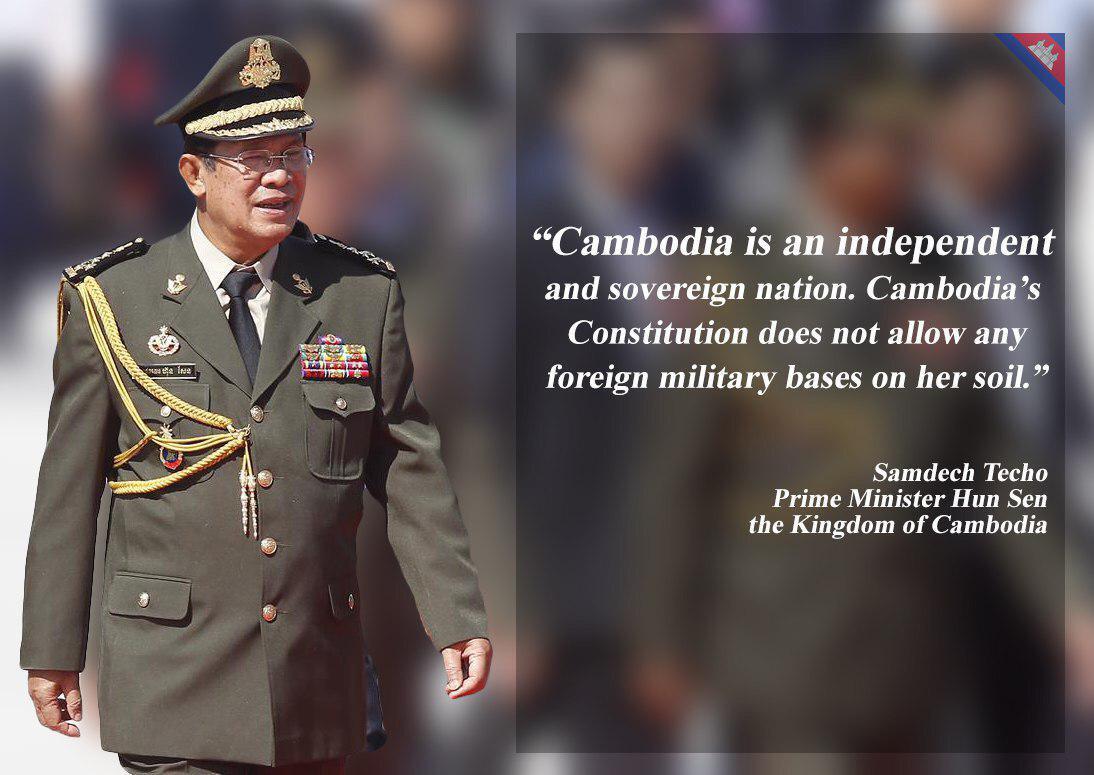 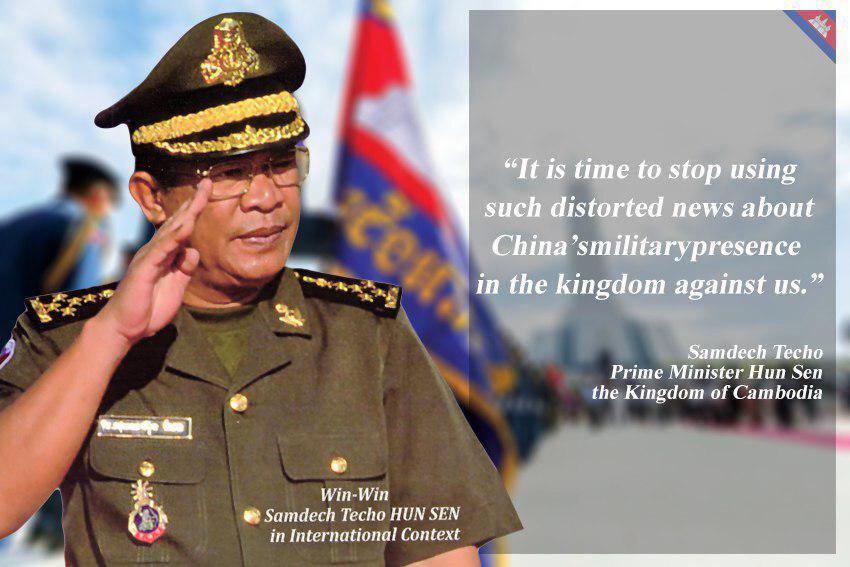