U.S. Should not Try to Hide the Fact to Protect Traitor Kem Sokha

Phnom Penh (FN), Sept. 11 - The U.S., as Cambodia’s former opposition’s patron, has persistently violated the sovereignty of Cambodia as an independent state, and has attempted many times to interfere into the nation’s internal affairs – an act which is contradicted to the principles of the UN’s charter – the highest law instrument that Cambodia, the U.S. and other member states must respect. Probably, because the U.S. feels ashamed itself or afraid that the history writes its name as the one who backs the failed “color revolution” in Cambodia, the U.S. Embassy to Cambodia on 10 September 2019 has posted a message of the White House Spokeswoman Morgan Ortagus in relation to the second anniversary of traitor Kem Sokha’s arrest, raising that Kem Sokha’s arrest and the dissolution of his puppet political party were groundless and appealed to the government to lift all charges against him and to restore his civil and political rights.

Again, it is an arrogant behavior of a country that claimed itself as a superpower and “a father” of democracy, human rights and rule of law; however, its actions are violating the international laws and are interfering into an independent and sovereign state. The actions intend to excuse itself from the conspiracy and treason cases of Kem Sokha and his party – which is believed to be an organization to execute the “color revolution” – and to restore its credit following a failure of the foiled “color revolution” plan – that attempted to topple the government’s leaderships in an undemocracy way. The historians can also carry on writing the embarrassingly failure experiences in Cambodia of the “color revolution” which was backed by the U.S.

In fact, the message from the White House Spokeswoman Morgan Ortagus was an old “language” made by the former opposition traitor group and was echoed by a few foreign officials, and its intention of such “uniform” voice is certainly clear: to savor its puppet and to restore its credit. The U.S. government officials, as well as some U.S. senators, have continued to arrogantly interfere into Cambodia’s internal affairs because they think that they must restore the U.S. credit. They must do it because most of the U.S.-backed “color revolution” plans around the world have been successful, except the one in Cambodia which was failed due to Kem Sokha’s “big mouth.” The U.S. mission this time is to try every single way to lift all charges against Kem Sokha and to reincarnate the former CNRP, so as to restore its credit. To do that, they used the “black-turned-into-white” strategy by claiming that Kem Sokha was innocent and the former CNRP must be reincarnated. Hence, the U.S. and its ally EU have to employ this and that principles and enact this and that act in a bid to put pressure on Cambodia to restore its credit while the claim that “it intends to restore Cambodia’s human rights and democracy” was just an excuse to allow them to interfere into Cambodia’s internal affairs.

Cambodia has never accused the U.S. in that case; it was its “good puppet” Kem Sokha who boastfully claimed that “the U.S. was the one behind its ‘regime’ change plan.” After heard Kem Sokha’s words, Cambodian people and diplomats, as well as staff of some civil societies, felt ridiculous because they believed this was a concrete evidence that Kem Sokha was conspiring with foreign country to cause destruction in Cambodia. The arrest of Kem Sokha under Cambodia’s court arrest warrant for conspiracy case with foreign nations was grounded on the video clip in which Kem Sokha talked to the Cambodian immigrants in Australia in 2013 and was intended to stop the movement to claim the power through undemocracy way and to push Cambodia into fresh “civil wars” under the excuses of “positive” or “peaceful” changes – the principles of Political Science Professor Jean Sabbs, a mastermind of “color revolution” that was success in a number of countries in the former Yugoslavia and Serbia. So, the White House Spokeswoman and other U.S. government officials should not pretend to be “deaf” and “dump” of such a concrete, irresistible evidence made by Kem Sokha himself, not to talk about many other evidences of foreign conspiracy of the former party’s leaders.

Did Ms. Morgan Ortagus and other U.S. government officials know what Kem Sokha confessed about the “color revolution” plan backed by the previous U.S. governments? Kem Sokha said that “since 1993 following his first win in election as a lawmaker, the U.S. government had invited me, as the first Cambodian politician, to visit and learn about the democracy process…  Once a year, I was invited since 1993 until recently, they said Cambodia needed to change, so they asked me to temporary withdraw from politics. I decided to resign from political party’s membership in 2002 and established an organization called ‘Cambodia’s Human Rights Center.’ What’s their purpose? They wanted me to change the leaderships. We cannot confront directly with the top leaderships; before we can change the top leaderships, we must change the grassroots. This is a strategy employed by the democracies and the U.S. that assisted me in that field asked me to take the models in Yugoslavia and Serbia, where dictator Milosevic was removed from power. Milosevic had a lot of tanks, brothers and sisters! But they managed to do it because of this strategy. They asked me to take that experience and apply in Cambodia. No one knows!… Now, a democracy superpower has been helping CNRP to prepare its policy and political program to run the future government… I, personally, was financially backed by the U.S. government to organize democracy trainings for 5 years, and today the result has paid back, thanks to the assistance from the Americans, that Cambodian people rise.

Kem Sokha’s confession was made while he was the vice-chairman of the former CNRP, and was an important, undisputed evidence that the former CNRP was under the control and command of foreign superpowers in their conspired plan to overthrow legitimate government through “color revolution” taking the models in former Yugoslavia and Serbia – which was employed under the excuse of “positive” change and “for the sake of democracy and human rights.” His words in his name as the vice-chairman of the former CNRP was an undisputed testimonial that the former CNRP and its leaders’ activities were to carry out their conspired, secret plan to topple legitimate authority by mean of “color revolution” successfully employed in former Yugoslavia. Even though the election had been well-organized and recognized as free and fair, their accusations became the excuse and cause of people gathering to secretly implement its “color revolution” and conspiracy plan with foreign countries.

What is remarkable is that former CNRP’s vice-chairman Kem Sokha spoke publicly that “the U.S. was the one who backed him to execute the plan to overthrow the legitimate authority based on the models in former Yugoslavia and Serbia.” It coincides with U.S. President Donald Trump’s speech during his sworn-in ceremony as the 45th President of the United States, which was a testimonial that the U.S. had employed a policy of “foreign’s leadership changes,” while he promised to stop such policy, saying that “we would carry out new diplomacy policy that is a lesson learned from the past. We would ‘stay away’ from all attempts to topple other states’ governments.”

All activities employed by Kem Sokha, as well as other former CNRP’s members and the party, were to execute the foreign-backed secret plan to overthrow the legitimate government through “color revolution.” Those claims were later reconfirmed by convicted Sam Rainsy, claiming that he was one of the mastermind of the “color revolution” in Cambodia, and there were a lot more messages and interviews he gave to media, which he claimed that what they were doing was to execute “color revolution” to overthrow the legitimate government – such activities required legal actions to be taken. Moreover, Kong Koam’s testimonials in front of the court as a witness in Kem Sokha’s treason case also reveal that the former CNRP intended to employ “color revolution” as a mean to claim the power undemocracy. Kem Sokha’s daughter Kem Monovithya also talked to the media about his dad and the party’s long relationships with U.S. government officials and senators. Kem Sokha himself used to confess who was behind the strategy and who backed the finance. Are these evidences enough?

The U.S. government officials should not try to hide the fact and avoid the case. The evidences are concrete enough for Cambodia’s court to take actions against traitor Kem Sokha in the middle of the night, because it is believed that if he was free, he would stir problems by implementing his boss’s plan. Were the U.S. officials suffered when seeing their puppet was arrested and detained in foreign conspiracy case against Cambodia? It is true that the U.S., as the former opposition’s patron, especially Kem Sokha’s patron, was not satisfied to see his puppet handcuffed and its “color revolution” plan failed. The world knows clearly that the recent changes of leaderships and governments of a number of countries, such as in Ukraine, Iraq, Libya, and other countries in the Middle East region, was by mean of “color revolution” and backed by the U.S. Cambodia used to experience that in 18th March 1970, when CIA supported the coup d’état that toppled late King Norodom Sihanouk and installed Lon Nol to the power – a move that pushed Cambodia into civil wars – and nowadays some countries that were targeted in the U.S.’s “color revolution” plan has been suffering like Cambodia in the past.

From now on, Cambodia would not change its leadership by mean of “color revolution” and would not need destruction and suffering like in the past. Cambodia has experienced too much leadership changes undemocratically. Hence, the U.S. government officials should give up their ill intentions and should not try to push Cambodia into its geopolitical struggle that they are playing and framing Cambodia under the excuses of human rights and democracy! Cambodia is enjoying peace and development and this peace is the result of a huge sacrifice of Cambodian people. That is the reason why the Cambodia’s government, with full support from its people across the country, must safeguard its nation, sovereignty, independence and peace at any prices and would not trade them with any foreign assistance or support. Cambodia is sticking with the policies of integrity, non-alignment and co-existence. All countries, including the U.S., are Cambodia’s good friends – good friends with diplomatic ties and mutual respect of rights. 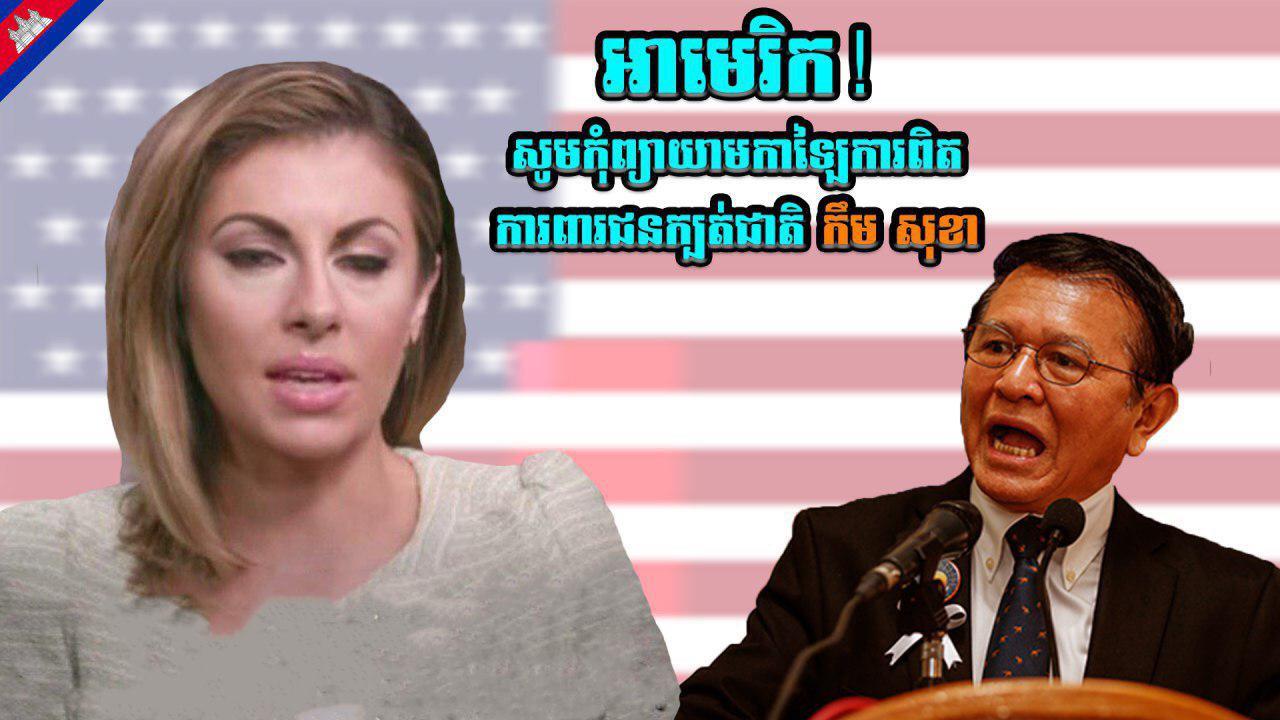