MANILA, Oct. 17 (Xinhua) -- The death toll from the 6.3-magnitude earthquake that struck North Cotabato province in southern Philippines on Wednesday has climbed to five people, local officials said on Thursday.

Mayor Reuel Limbungan of Tulunan town in North Cotabato said a seven-year-old child died in a house after a wall collapsed onto her in Datu Paglas town.

In nearby M'lang town, Vice Mayor Joselito Pinol said a man died due to heart attack. In Magsaysay town in Davao del Sur, a two-year-old child also died when falling objects hit her while asleep.

A house was reportedly buried in a landslide triggered by the tremor, killing a mother and her child.

The National Disaster Risk Reduction and Management Council has yet to release an official count of the casualties and the damage from the tremor.

In addition to the dead, provincial disaster officials said at least 17 people were injured in Makilala town. At least 60 people were also injured in Tulunan town in North Cotabato, and in Magsaysay and Digos in Davao del Sur, media reports said.

The Philippine Institute of Volcanology and Seismology (Phivolcs) said Wednesday's inland quake, which struck at 7:37 p.m. local time, hit at a depth of 2 km, about 23 km southwest of Makilala, a town in North Cotabato province.

A government disaster agency said several houses and buildings were damaged and many people in towns affected by the tremor slept outside in makeshift tents or in the open air overnight.

Television video showed fearful residents and office workers in Davao City and Kidapawan City rushed out of the building. Some of the patients in a hospital in Kidapawan City were also evacuated from the damaged hospital building.

The institute said it has recorded more than 200 aftershocks since the tremor struck.

The Philippines has frequent seismic activity due to its location along the Pacific "Ring of Fire." 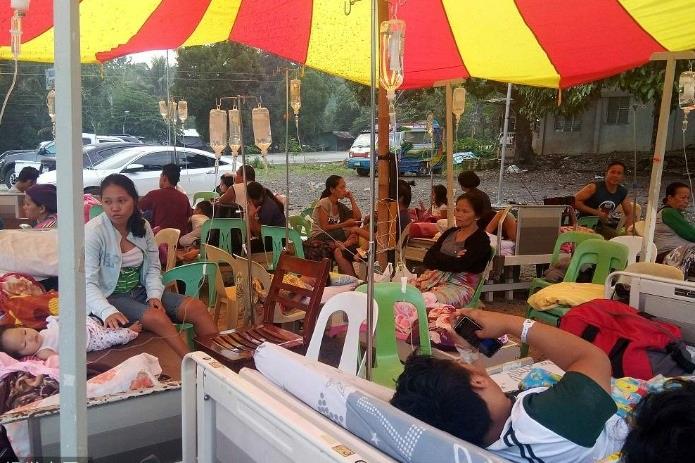