11 Killed in Protests in Chile: Official

SANTIAGO, Oct. 21 (Xinhua) -- Protests over the weekend left 11 people dead in Chile's capital Santiago and the Metropolitan area, an official said on Monday.

"The official death toll we regrettably have from the past two days is 11: three deaths on Saturday and eight on Sunday," Santiago Mayor Karla Rubilar told reporters at a press conference.

The protests sparked by a hike in subway fares snowballed into riots against the high cost of living and lack of services, with dozens of subway stations vandalized or set on fire.

On Saturday, President Sebastian Pinera declared a state of emergency in the capital and surrounding areas and imposed a curfew in a bid to quell the protests with military presence. He later announced the suspension of the fare hikes, but also extended the state of emergency as rioting continued.

"We have to move towards rebuilding but also the rebuilding of trust," said Rubilar, referring to public anger with the political class.

She added the unrest "has been building for a long time and we didn't see it coming."

Only one of Santiago's six subway lines would be operating partially Monday due to damage at 41 stations, but 465 additional buses would be circulating to compensate, with free transportation to the downtown area, she said.

Classes were cancelled in 48 districts but officials would analyze when to resume them, she added.

Protests against the fare hikes began on Oct. 14 but grew into demonstrations against small pensions, low wages, and costly medical care and other services. 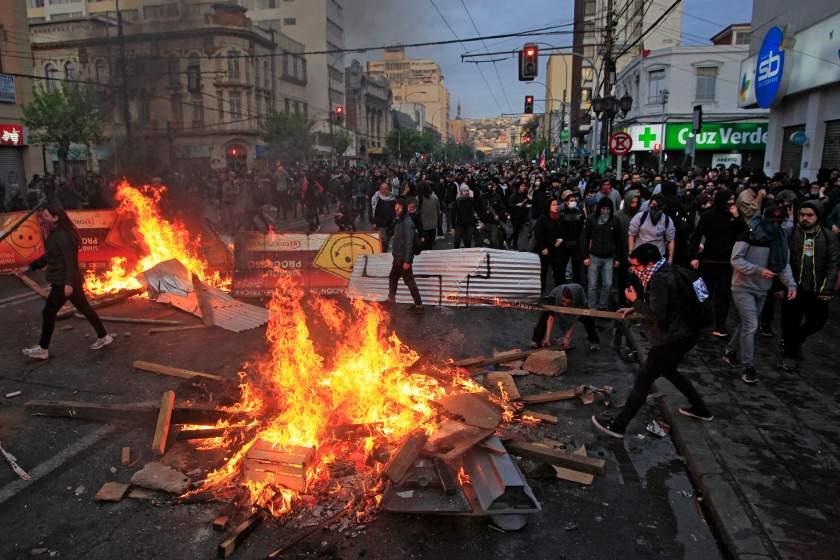