TOKYO, Oct. 22 (Xinhua) -- Japanese Emperor Naruhito will proclaim his enthronement Tuesday in front of 2,000 guests from around the world.

In an ancient-style ceremony to be held at the Imperial Palace in Tokyo, steeped in traditional stately rituals, the 59-year-old emperor will proclaim his enthronement after ascending the Takamikura imperial throne.

Empress Masako, at the time, will be seated on the adjacent Michodai throne.

The official ceremony, the equivalent of a coronation, known as "Sokuirei Seiden no gi" will take place at the Seiden State Hall.

It will involve Prime Minister Shinzo Abe from the lower floor of the "Matsu-no-Ma" state room expressing congratulations and good wishes and leading the guests in wishing for the emperor's longevity.

The emperor, earlier Tuesday, wearing a white robe, visited the three Imperial sanctuaries to report to various deities that the enthronement ceremony will be held this day, in the first of the ceremonial rituals.

The empress, in a white-layered kimino, meanwhile, visited the sanctuaries separately.

The first of the day's ceremonial rituals were attended by Crown Prince and Princess Akishino and other Imperial family members.

Emperor Naruhito's reign began on May 1 as he ascended the Chrysanthemum Throne marking the beginning of a new imperial era in Japan.

His reign and the new Reiwa Era in Japan began following the abdication of his father, former Emperor Akihito.

Emperor Naruhito, following the abdication of his father, became Japan's 126th emperor according to the traditional order of succession and will continue in his father's footsteps as a "symbol of the state."

Former Emperor Akihito in his final speech as a monarch before stepping down a day before Emperor Naruhito's reign began, officially declared his abdication and in doing so said he sincerely hoped for a stable future for Japan and peace and happiness around the world.

Emperor Emeritus Akihito's abdication marked the end of the three-decade long Heisei Era and the first time a live monarch here has left the Chrysanthemum Throne in more than 200 years.

He was Japan's 125th emperor according to the traditional order of succession and expressed his desire to step down and relinquish his position in a rare video message broadcast in 2016.

During the video message he expressed his concern that owing to his age he might not be able to fulfill his official duties.

A year later, parliament passed a one-off bill enabling him to do so.

Tuesday's enthronement proclamation ceremony will be followed by a banquet to be held in the evening.

The enthronement parade for Emperor Naruhito that was scheduled to take place Tuesday, however, has been postponed until Nov. 10.

The rescheduling of the procession is so that the government could focus on dealing with the damage caused by Typhoon Hagibis.

The most powerful typhoon to hit Japan in decades ripped through the country on Oct. 12-13, wreaking extensive damage on wide swathes of the country and leaving at least 83 people dead and 4,000 still displaced in evacuation shelters. 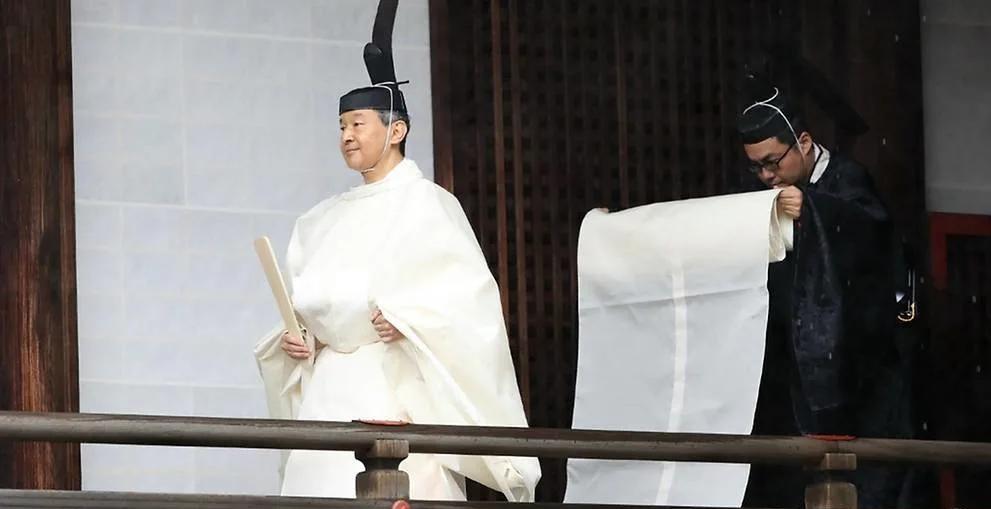