2,000 Residents Evacuated due to Massive Wildfire in Northern California

More than 500 firefighters are battling the blaze in Sonoma County, but their overnight efforts could only focus on evacuations and the high winds made the fire difficult to contain.

"Our aircraft can't drop in those conditions. When you have that kind of wind speed, the resistance to control is beyond our capabilities. Because of the terrain and fuel conditions and the heat and humidity, the containment is still very challenging." Mark Parks with Cal Fire told local KCRA news channel.

There are reports that dozens of buildings were burned down but so far there is no report of casualties.

The fire is reported starting near the Geysers Geothermal Plant, the world's largest geothermal field but the authority don't disclosed if the plant had anything to do with it. Firefighters also said they do not know if the Pacific Gas and Electric Company (PG&E) power shutoff was in effect in the area at the time the blaze started.

PG&E, a publicly-traded, investor-owned utility that services two thirds of northern California, announced Wednesday that it would cut off electricity to almost 180,000 California customers from that day's noon through Thursday as a precaution to possible breakout of wildfires. 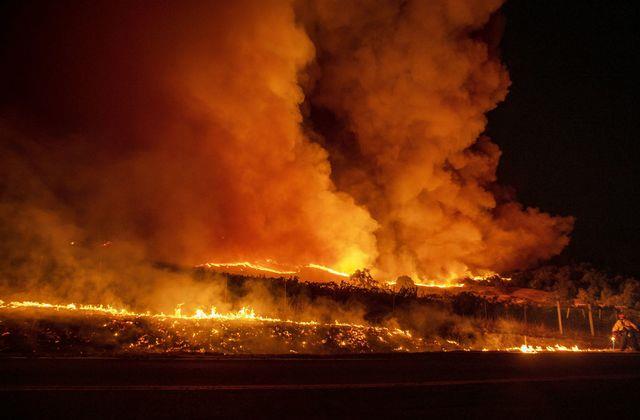