1. On the occasion of the 2019 ASEAN-Republic of KOREA Commemorative Summit, Minister of Foreign Affairs Kang, Kyung-wha had a bilateral meeting with Mr. Prak Sokhonn, Deputy Prime Minister and Minister of Foreign Affairs and International Cooperation of the Kingdom of Cambodia, in Busan on November 25. The two sides discussed ways to reinforce the institutional foundation of the Republic of Korea-Cambodia cooperation and to step up mutually beneficial cooperation for shared prosperity as well as the ASEAN-ROK and Mekong-ROK cooperation.

2. The two Ministers highly appreciated the ROK and Cambodia having developed close cooperative ties in a broad range of areas, including people-to-people exchanges, shared prosperity and development cooperation, over about 20 years since the re-establishment of diplomatic relations in 1997. They welcomed the fact that by concluding the “Agreement for the Elimination of Double Taxation with respect to Taxes on Income and the Prevention of Tax Evasion and Avoidance” and the “Treaty on Mutual Legal Assistance in Criminal Matters” following the foreign ministerial meeting, the two countries reinforced the institutional foundation of bilateral cooperation.

° In particular, the two Ministers noted that the concluded “Agreement for the Elimination of Double Taxation” will promote bilateral investment and thereby contribute greatly to advancing mutually beneficial cooperation. They also welcomed the fact that, with more than 300,000 people of the two countries visiting each other’s countries annually, by concluding the “Treaty on Mutual Legal Assistance in Criminal Matters,” the two countries further bolstered the institutional basis for protecting their nationals and boosting people-to-people exchanges.

3. The two Ministers shared the understanding on the need to further broaden the scope of future-oriented and mutually beneficial cooperation for shared prosperity. On that note, they agreed to continue to explore concrete ways to promote cooperation, through the renewal of the “Memorandum of Understanding on Cooperation in the Field of Agriculture,” stepping up financial cooperation, strengthening infrastructure cooperation with the Economic Development Cooperation Fund, and starting a joint feasibility study on an ROK-Cambodia FTA.

° The two Ministers suggested that, on the basis of the renewed “Memorandum of Understanding on Cooperation in the Field of Agriculture,” the two countries step up policy and technical exchanges and cooperation in the field of agriculture and further advance cooperation in reinforcing financial infrastructure in Cambodia, including through the currently ongoing project to set up a payment system.

4. The two Ministers agreed to work more closely together in the process of implementing the New Southern Policy, the aim of which is to enhance the ASEAN-ROK relations. In particular, they agreed to cooperate actively in the process of exploring the way into the next 30 years of the ASEAN-ROK relations in the wake of the 2019 ASEAN-Republic of KOREA Commemorative Summit.

5. On the heels of their meeting, the two Ministers signed the two following agreements. 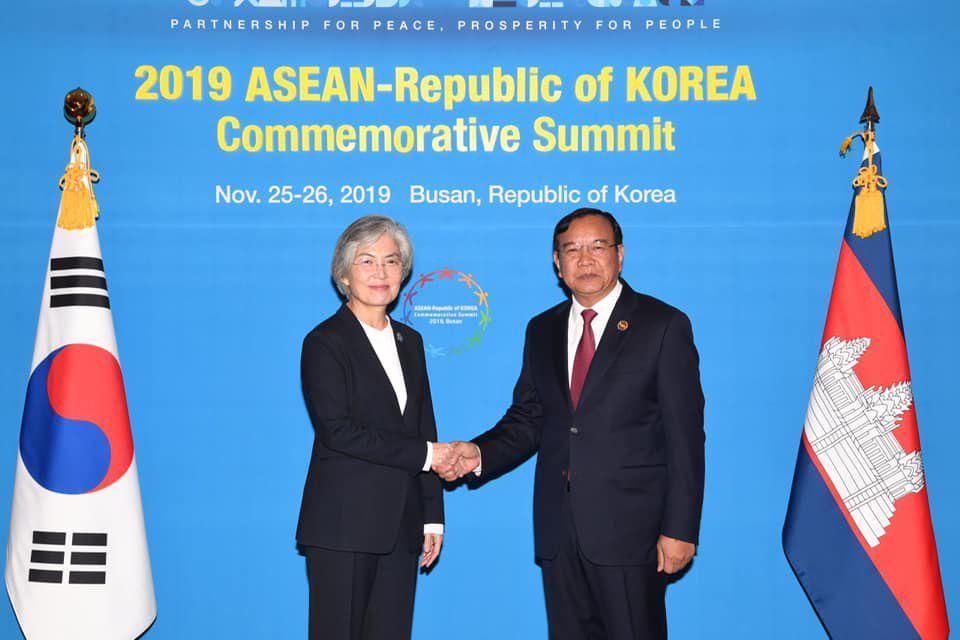 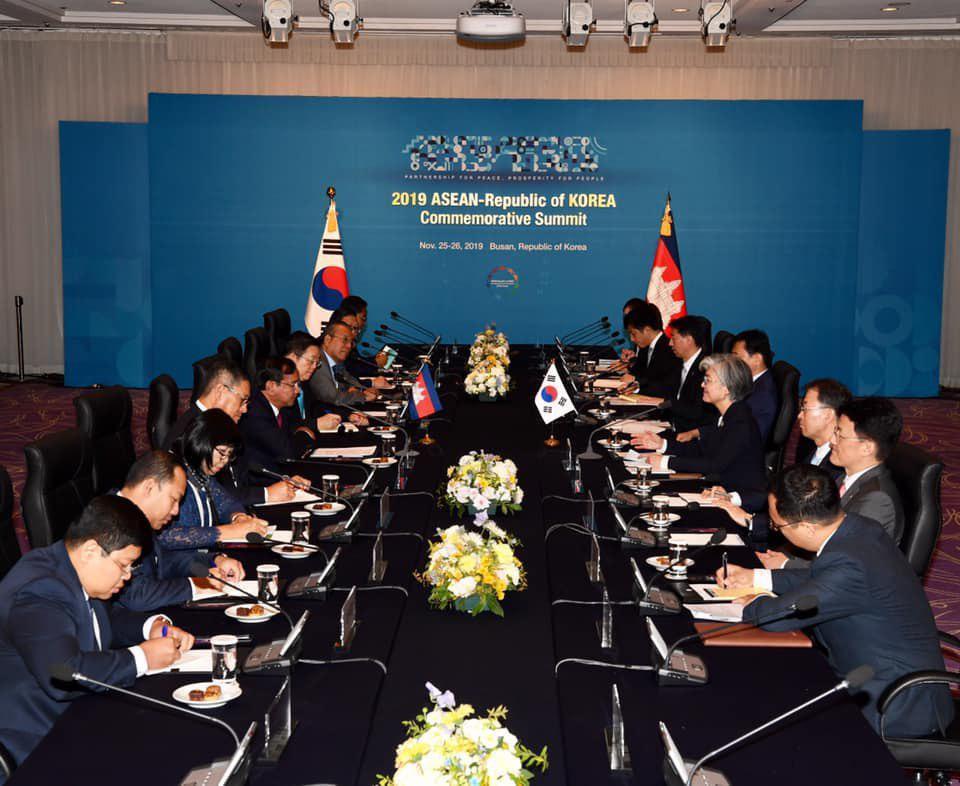 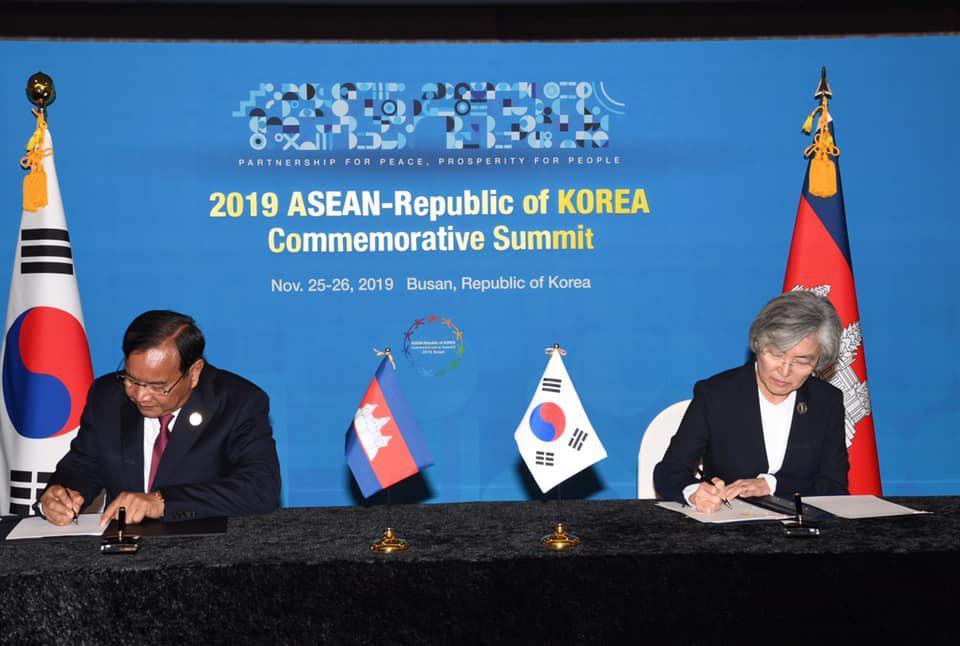 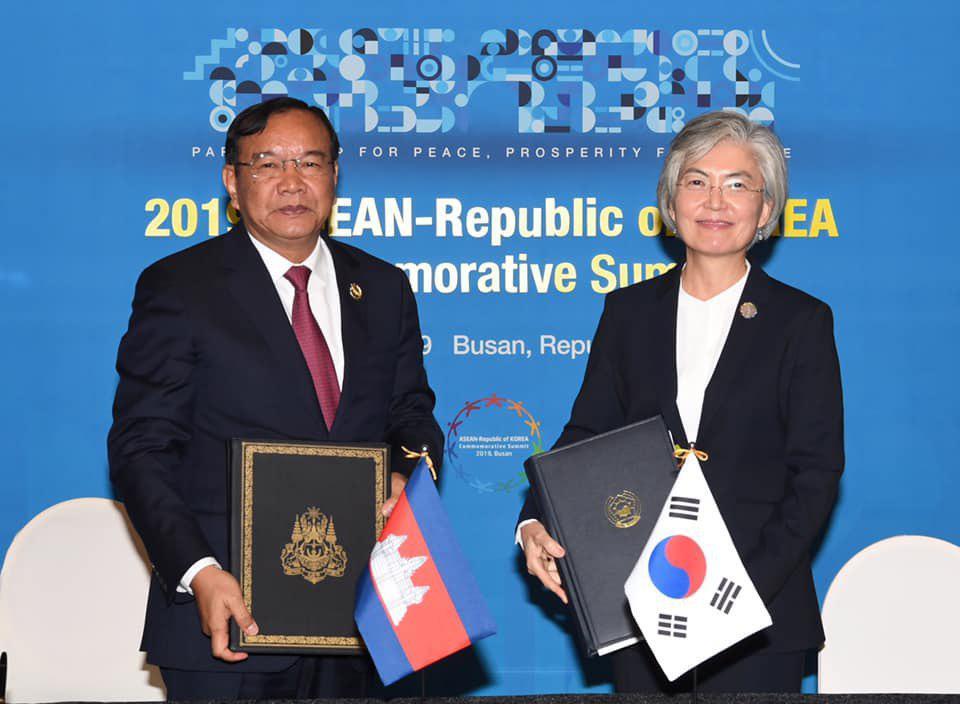