He shares his personal views on some topics as follows:

1. New Geopolitical Tensions and Their Impact on the World

The longest period of stability and prosperity in modern times, a fruit born out of the international order built in 1945, is being deeply shaken because the fundamental values underlying it as well as the core principles of international law are being flouted and no longer respected. Moreover, the trend of unilateralism and the exertion of force against weak countries is on the rise, undermining international order and multilateralism.

Truly, nowadays we note the degradation of the international arms control system and a significant increase in nuclear risks. Also, there has been an alarming shift in doctrinal military and political policies towards the idea of waging war as a mean to maintain one’s own supremacy, which is an unacceptable act. For instance, global commitments made are unilaterally reneged; violent blows are levelled against international institutions; and the voices of reason are stifled by the arbitrary practice of unilateral sanctions and other coercive political, economic and financial measures, all because of the strongest country uphold their interests above everything else.

Furthermore, there is an abusive use of the right of interference, which has taken on such a proportion that it undermines one of the fundamental principles of our UN Charter: the right of peoples to self-determination and the national sovereignty. The damages on the current international order are causes for great concern. In addition, the possibility of a so-called New Cold War has also become a significant concern because this small country, once caught in the midst of the Cold War conflict, ideological rift and nationalist fanatism, paid a very high price. Thus, we must outright reject any attempt to allow tragic history to repeat itself.

Never, in our history, has a health crisis had effects and consequences of this magnitude. Although we have yet to grasp the full impact of the pandemic on the world economies, we can anticipate the gloomy prospect of business bankruptcies and massive layoffs, which have been affecting the lives of millions of people.

Paradoxically, the pandemic has reminded us of the indispensable solidarity that unites the people of the world. For the world economy to recover faster, we must work more closely to address this crisis through international institutions based on the principles of transparency and efficiency. Now more than ever, we must renounce the inward looking “Me First” attitude, which is the very negation of the universality of the human values. Cambodia has shown its humanitarian gesture early this year, when the MS Westerdam cruise ship, floating at sea with no port to anchor, was allowed to dock in our port, thus allowing the stranded passengers and the crew safe passage to their respective country.

Looking at the global economies which have severely been hit by the COVID-19, my worries are particularly related to the compounding effects on the resources to deliver on the key priorities necessary to achieve the 2030 Sustainable Development Agenda on time, and this may require us to re-evaluate the feasibility of achieving the goals set in the past.

Climate change is another matter of great concern. Global CO2 emissions have increased by 1.5% per year over the past ten years. 75% of the Earth’s environment shows significant signs of degradation by plastics, pesticides, nitrates, and heavy metals. As scary as these statistics show, it is mind-boggling to note that not many countries have done enough to meet their respective COP21 commitments.

Cambodia is a small country with limited resources, but we strive to address the challenges related to climate change, under both national and international frameworks. For instance, we have taken efforts to meet the obligations born of the COP21: climate change action is a key component of our national development policy. In fact, we will update our Nationally Determined Contribution (NDC) for the implementation of the United Nations Framework Convention on Climate Change (UNFCCC) ahead of the COP26 meeting in Glasgow.

It would be a very serious mistake to brush aside the threat of non-state terrorism, in the mere hope that it would go away by itself. We have to admit that the root causes of this religious radicalism, or for that matter for all forms of radicalism, have yet to be addressed. In fact, all forms of radicalism or violent extremism stem from a deep sense of social injustice, based on discrimination on gender, language, skin color, beliefs or origins. Moreover, there remain other critical threats to the peace and security all around the world.

In this context, Cambodia is proud of our peacekeeping contributions throughout the years under the UN umbrella. As of now, there are nearly 800 Cambodian blue helmets, of which 10% are women, serving in Sudan, South Sudan, Lebanon, Mali and Central African Republic.

On this 75th anniversary of the UN, we must honor all those brave persons, including the Cambodians, who have given their lives for the noble cause of contributing to a better and more peaceful world. Cambodia remains committed, today as ever, to continue our peacekeeping efforts with a view to promoting peace and development for all. Cambodia counts nevertheless on the UN to provide adequate resources, regular trainings in pre- and post-deployments, and continuous supports to the Peacekeeping Operations to enable them to deliver on their mandate fully, efficiently and safely.

As a peace-loving small country committed to democratic principles, Cambodia can play its part in the international community only if it is assured that the rules governing the international system are fairly applied. Unfortunately, all too often, depending on the political ambition and hidden opportunistic agenda of some countries, Cambodia had to deal with hypocritical double-standards, biased and politically motivated decisions; in short, injustice.

This story of injustice reminds me of a historical “déjà vu”. A little more than 40 years ago, Cambodia was liberated from the Khmer Rouges’ genocidal regime, where more than 2 million Cambodians have perished in the hand of the barbaric regime. For many years, the traumatized and exhausted survivors, totally stripped of everything, had to rebuild the nation from scratch. Quite ironically, it was to these very same survivors who were being punished by a majority of UN member states while allowing the Khmer Rouge executioners to occupy the Cambodian seat in the UN. These same governments that preached incessantly about democracy and human rights were the ones that have deprived the entire surviving population access to food, health, education, housing, development and even peace for 12 long years.

“I believe history repeats itself in the case of the EU’s withdrawal of the EBA at a time when Cambodia struggles to survive amid the COVID-19 pandemic,” the premier underlined.

That struggle notwithstanding, Cambodia is strongly determined, as it did 40 years ago, to defend what it believes is the rightful path, that is to defend our sovereignty and to protect our so hard-won peace, which is fully cherished by Cambodians who have gone through the most tragic devastation and are now rising as a nation be on an equal footing, status and rights with other nations in the region and the world.
=FRESH NEWS 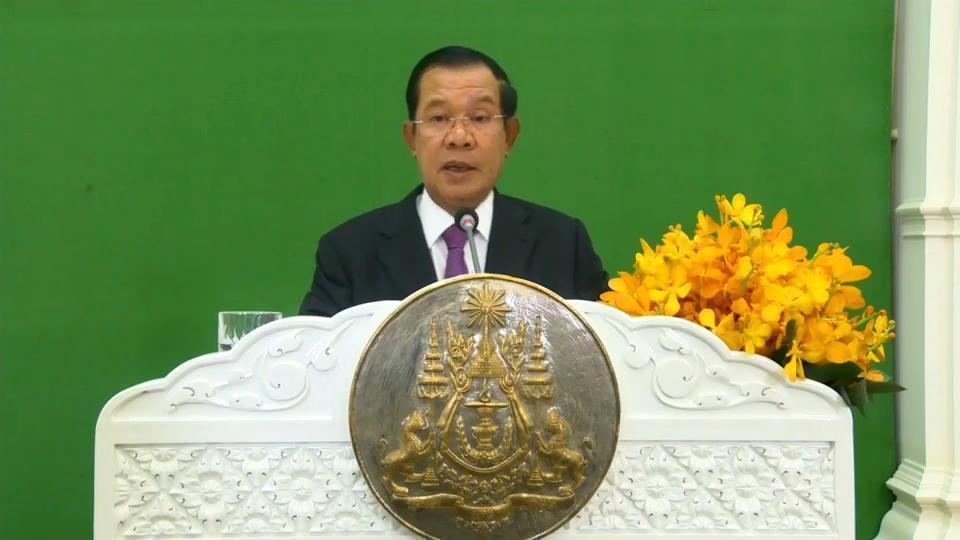 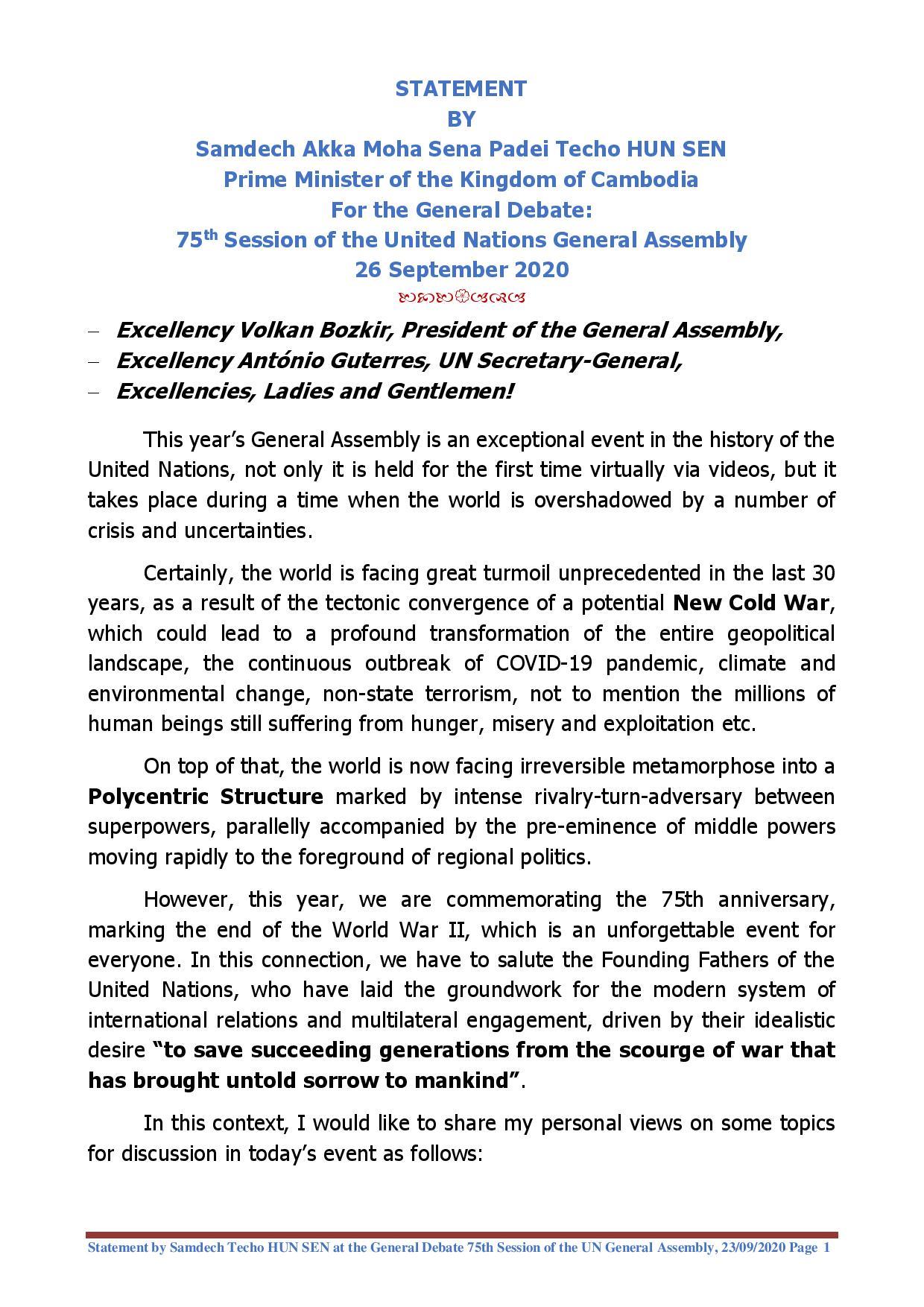 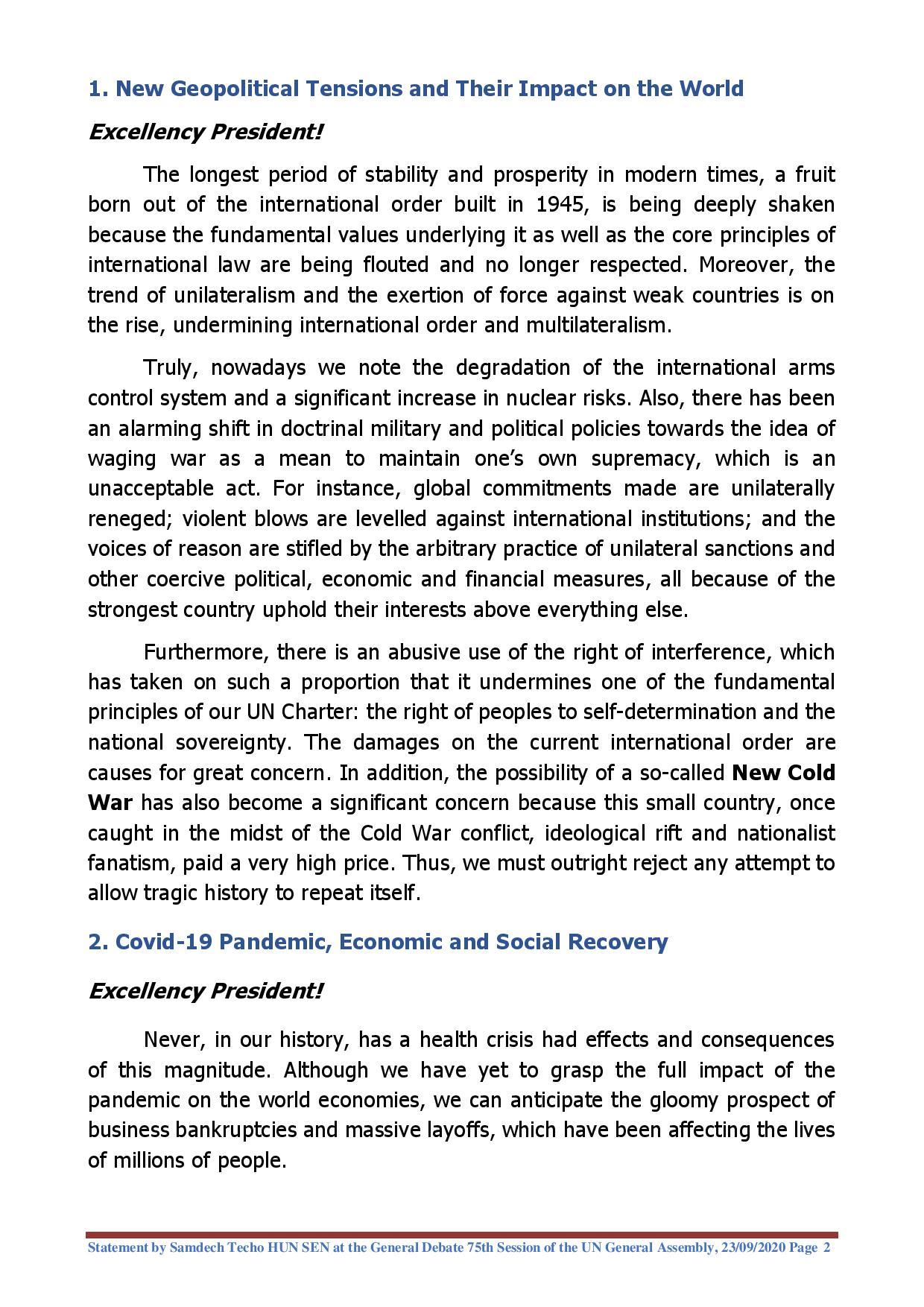 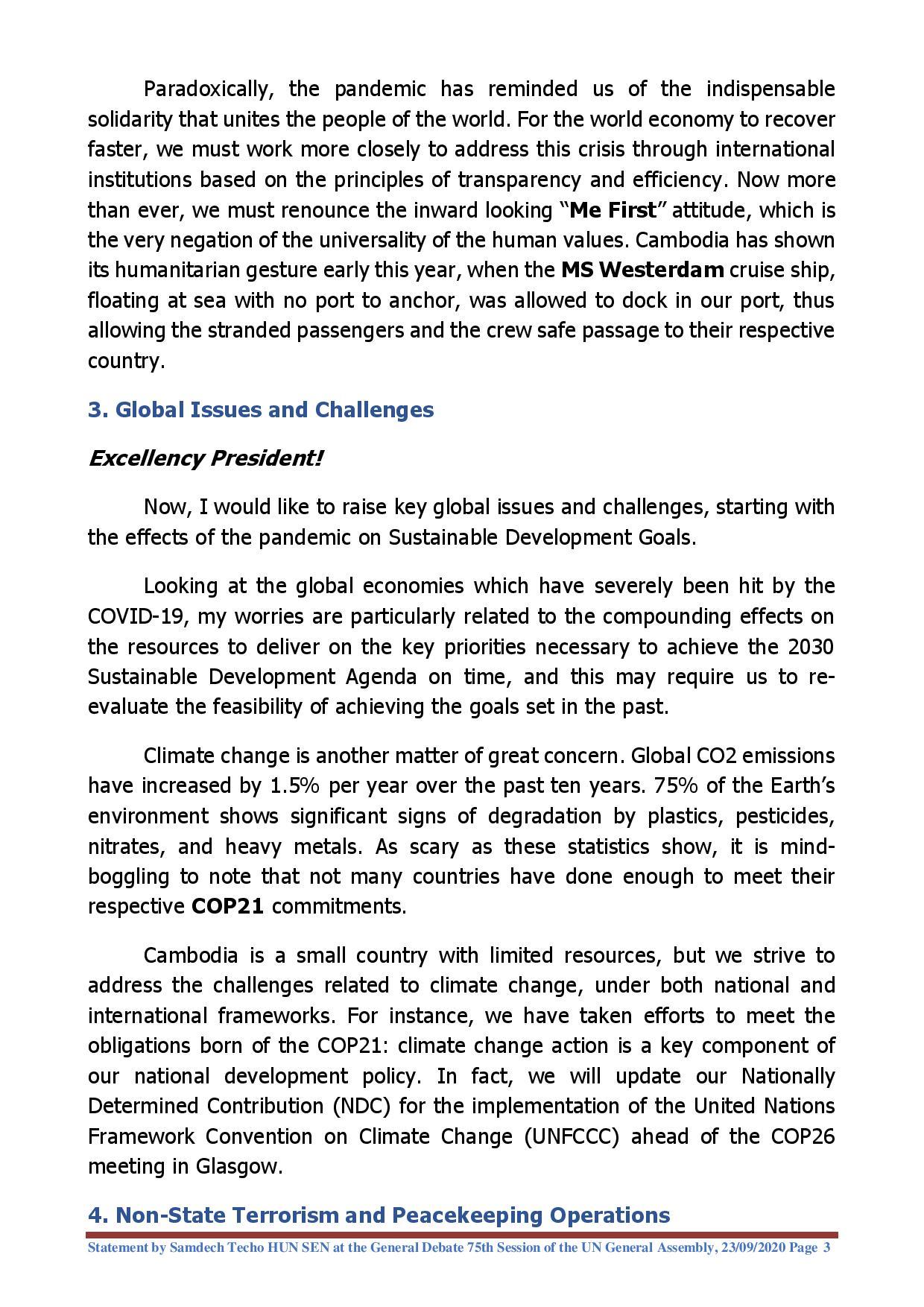 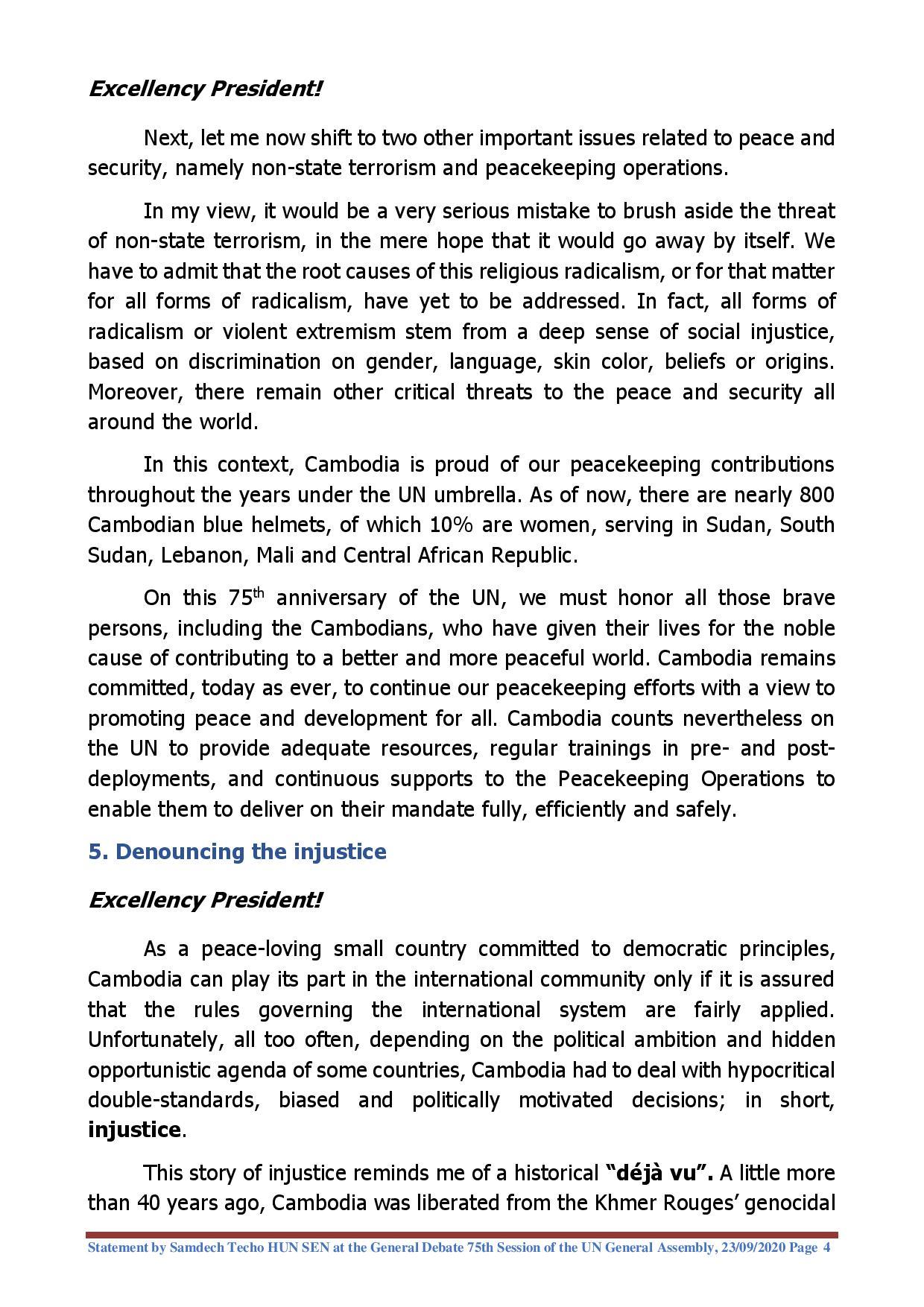 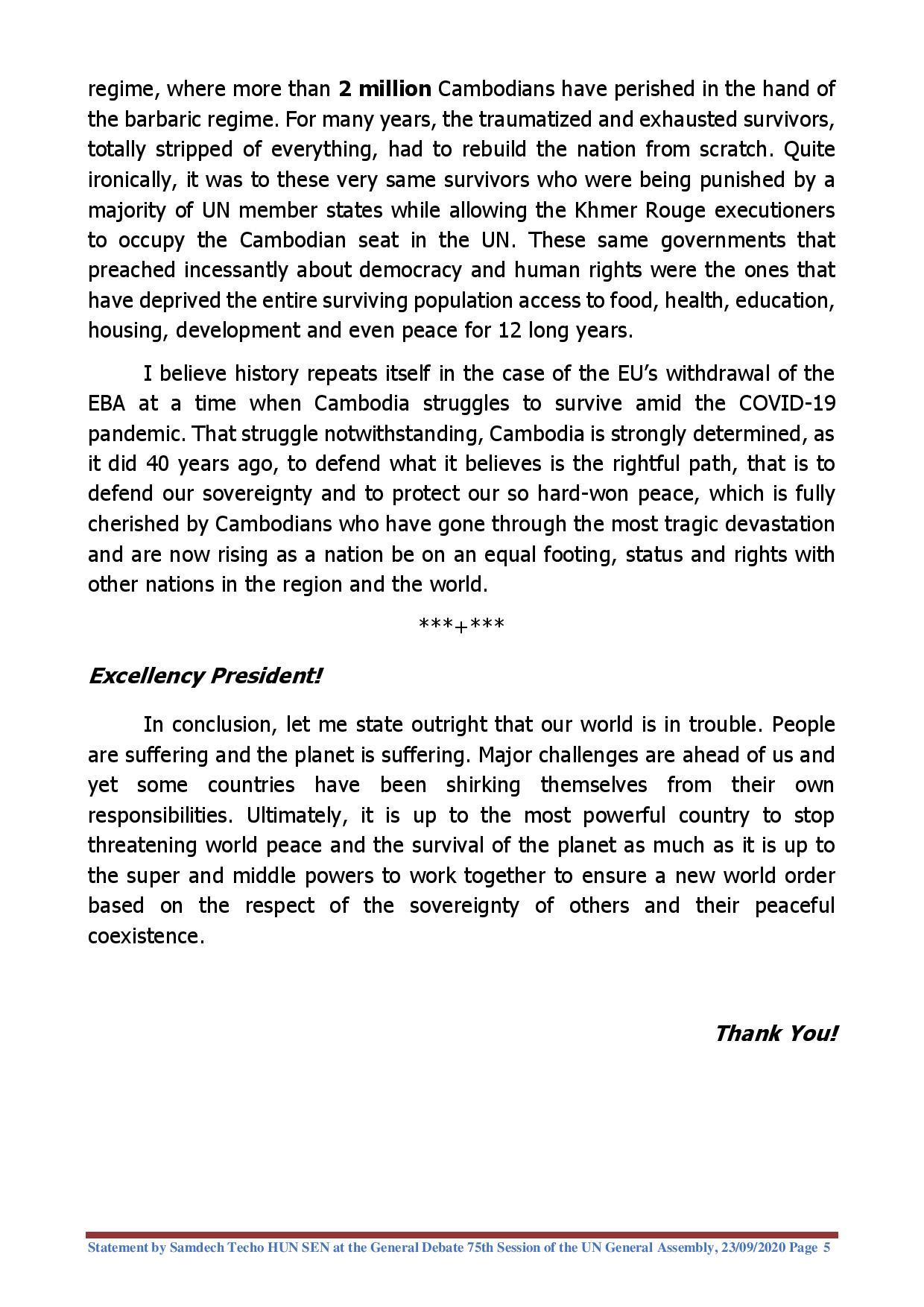 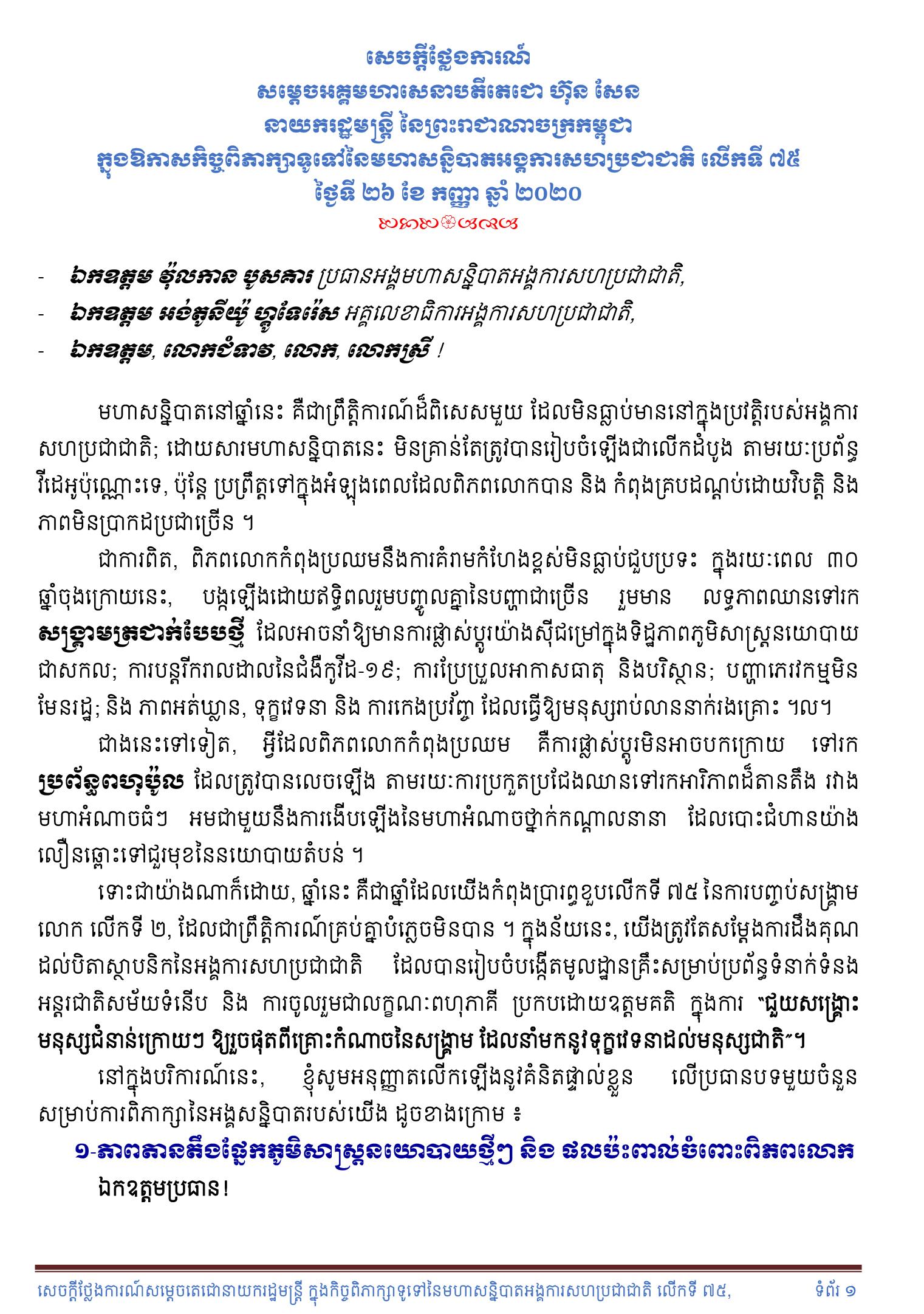 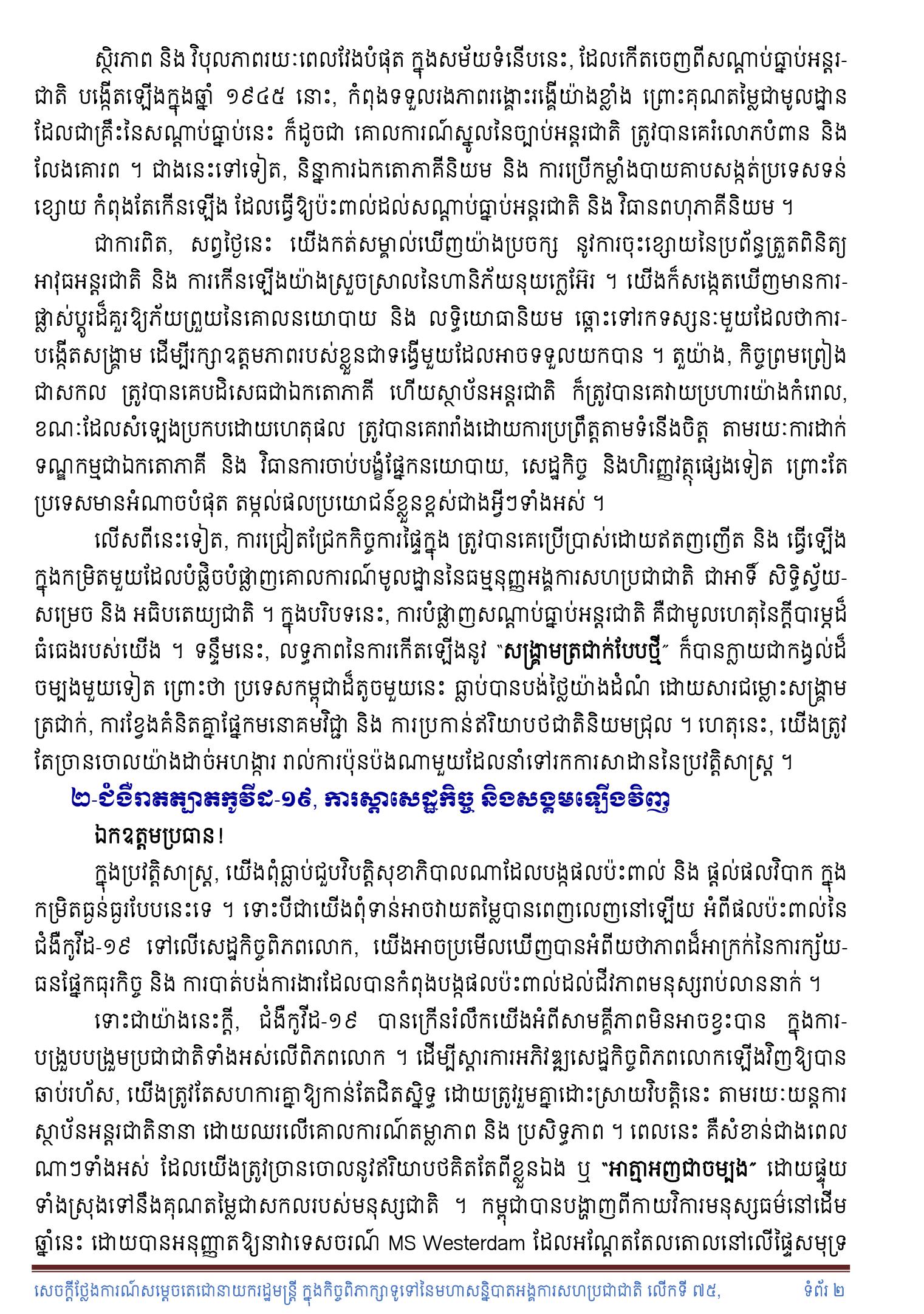 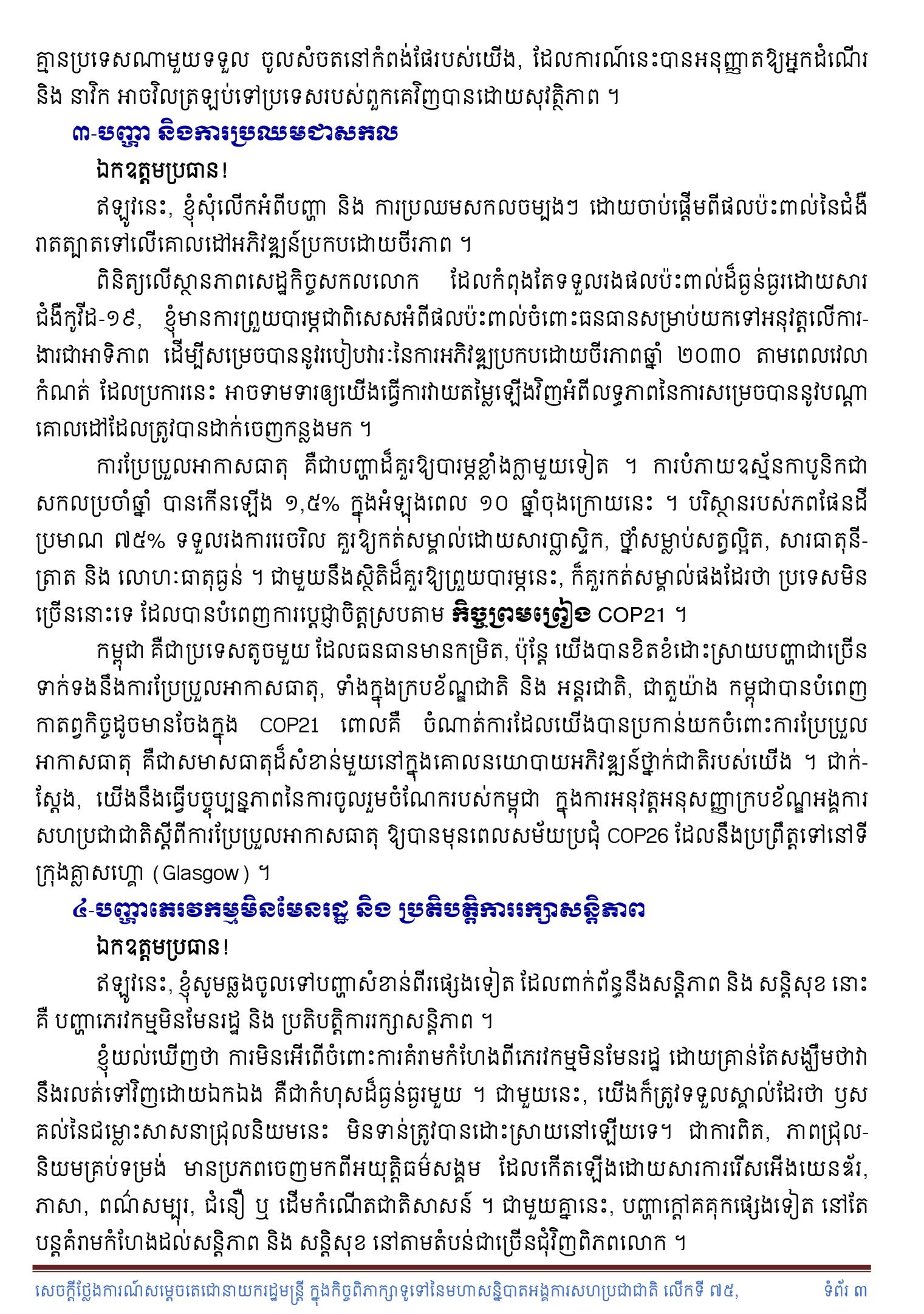 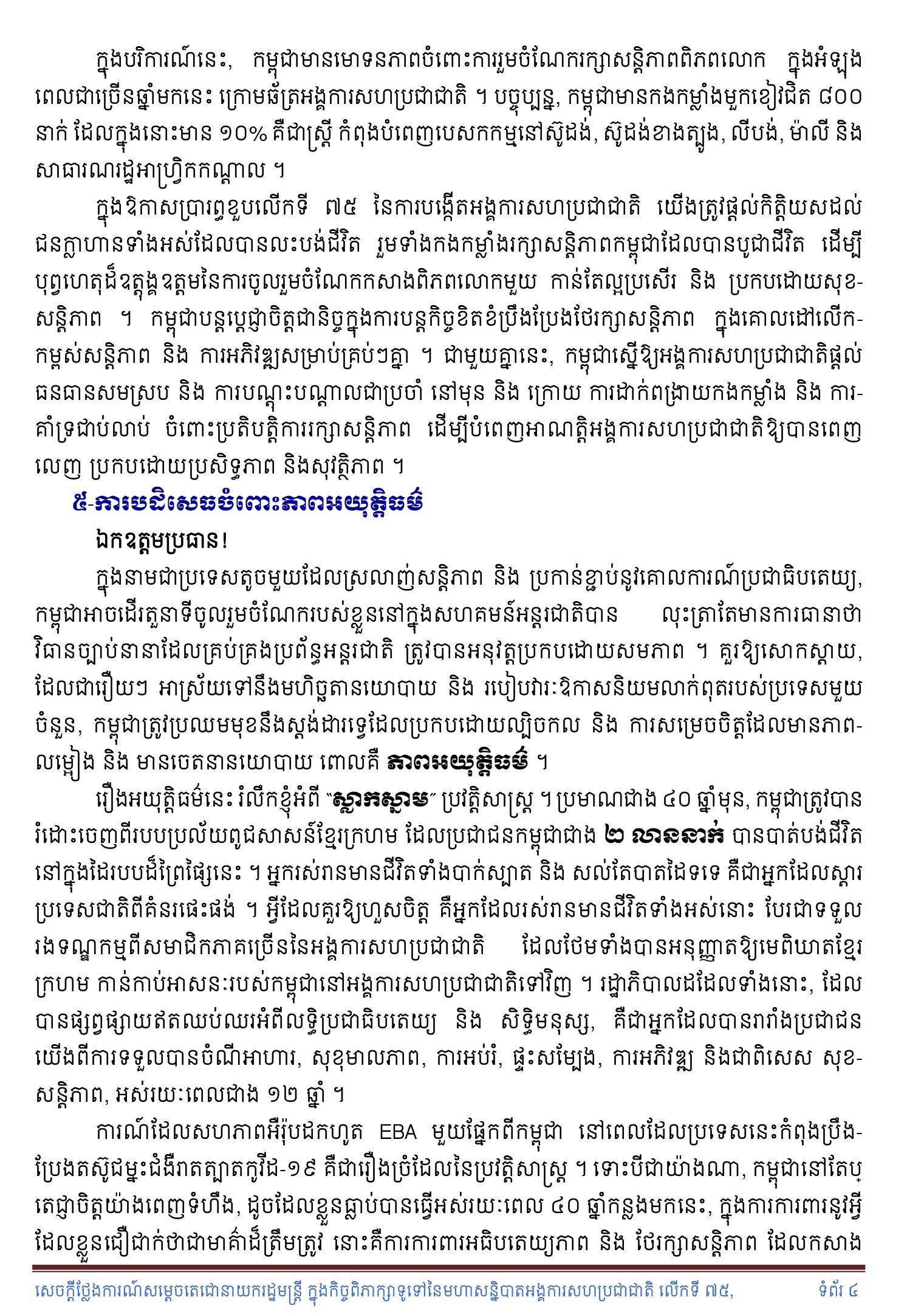