This is another significant measure taken by the Central Authorities to improve the legal and political system of Hong Kong apart from the National Security Law, serving as a legal guarantee for closing loopholes in Hong Kong’s electoral system and implementing the principle of “Patriots Governing Hong Kong”. It will help ensure Central Government’s overall jurisdiction over the SAR , so as to guarantee the prosperity and stability of Hong Kong, and the sound and sustained implementation of the “One Country, Two Systems”.

It is a significant decision. Back in the colonial period, Hong Kong had no democracy, let alone democratic elections. Since its return, the SAR has entered a new era of the “One Country, Two Systems”, under which Hong Kong is administered by Hong Kong people with a high degree of autonomy. Hong Kong has witnessed orderly development of the political democracy, and Hong Kong people has been enjoying more extensive political rights and freedom than ever. For instance, the Decision improved the institutions on the Election Committee. Compared with 1200 members from 4 walks of life in the past, the new Committee will be made up of 1500 members from 5 walks of life, expanding political participation by Hong Kong people with broader representation. Apart from electing the Chief Executive, the Election Committee will be entrusted with the new function of electing a relatively large share of Legislative Council members and directly participating in the nomination of all candidates for the Legislative Council. It will help break the limitations of interests of certain regions or groups, enable the Legislative Council to better represent the overall interests of the Hong Kong society, and facilitate the communication between administrative and legislative bodies.

It is a fundamental measure. In recent years, especially after the turbulence over the amendment bill in 2019, anti-China, destabilizing forces and radical activists in Hong Kong have openly called for “Hong Kong independence” and blatantly carried out anti-China and destabilizing activities. They resorted to every possible means to paralyze the functioning of the Legislative Council and obstruct the law-based administration of the SAR government. They masterminded and perpetrated the so-called “primary election”, in an attempt to obtain a majority in the Legislative Council so that they could step further to grab the power to administer Hong Kong. Some foreign countries and external forces, by way of their own legislative bills or administrative means and through their consular agencies and NGOs in the Hong Kong SAR as well as other channels, blatantly meddled with Hong Kong affairs. They also grossly imposed so-called “sanctions” on the relevant Chinese personnel and flagrantly emboldened and covered those anti-China and destabilizing forces in Hong Kong. The rioting and turbulence that occurred in the Hong Kong society reveals that the existing electoral system in the Hong Kong SAR has clear loopholes and deficiencies, which the anti-China and destabilizing elements jumped on to take into their hands the power to administer the SAR. Thus the Central Government has the power and responsibility to mend those loopholes and deficiencies by improving relevant institutions at constitutional level, which has indisputable and unchallengeable authority.

It is a move in response to the call of the times. Some representatives of the Hong Kong compatriots once lamented that Hong Kong people had long suffered from the loopholes of the electoral system.

The more painful Hong Kong people feel towards the damage caused by the anti-China and destabilizing activities, the stronger support they provide for activities in favor of the motherland and Hong Kong, and the more urgent desire they have to improve the electoral system. After the Decision was adopted, the mainstream of Hong Kong’s public opinions has pointed out that it is a legitimate, reasonable and necessary document with solid legal foundation. It is significant for Hong Kong, as it will help ensure the sound and sustained implementation of the “One Country, Two Systems”, and safeguard the fundamental and long-term interests of Hong Kong people. According to Ta Kung Pao, a new democratic electoral system in line with local needs with Hong Kong characteristics will come into existence. It will help withstand potential political risks, de-politicize and de-radicalize the Legislative Council, and reduce the resistance for the SAR government to grab the development opportunity and focus on improving people’s livelihood. Hong Kong will see no more periodic confrontation. With its social trauma healing, its economy and people’s livelihood being promoted, and its international status being solidified, Hong Kong will embrace an all new future. Many agree that the Decision will mend the loopholes and deficiencies of the electoral system, expand balanced and orderly political participation by all walks of life, foil the plot by anti-China and destabilizing forces to grab the power, and build a firewall for Hong Kong’s long-term prosperity and stability. As Prof. Chen Qingquan of Hong Kong University says, the Decision and the relevant contents in the 14th Five-Year Plan have equipped Hong Kong with a pair of wings by providing both a stable and free environment and new development opportunities. 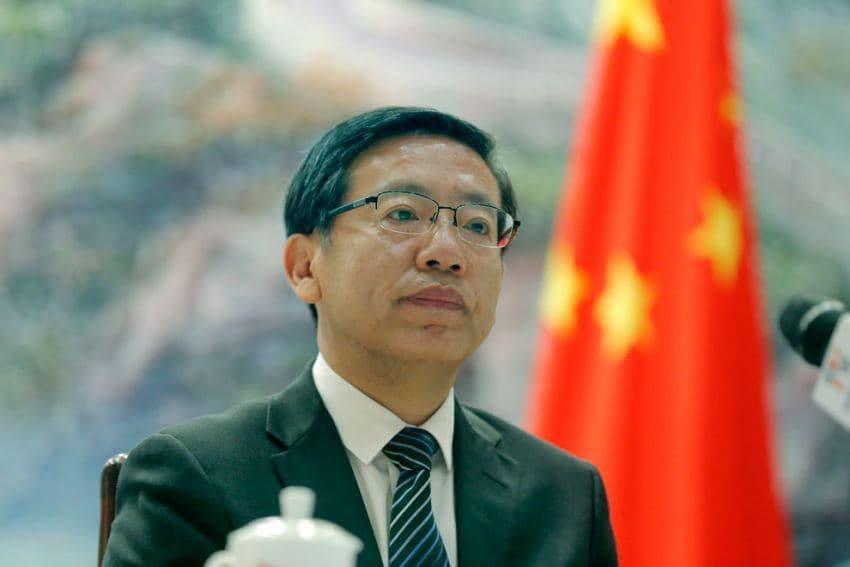 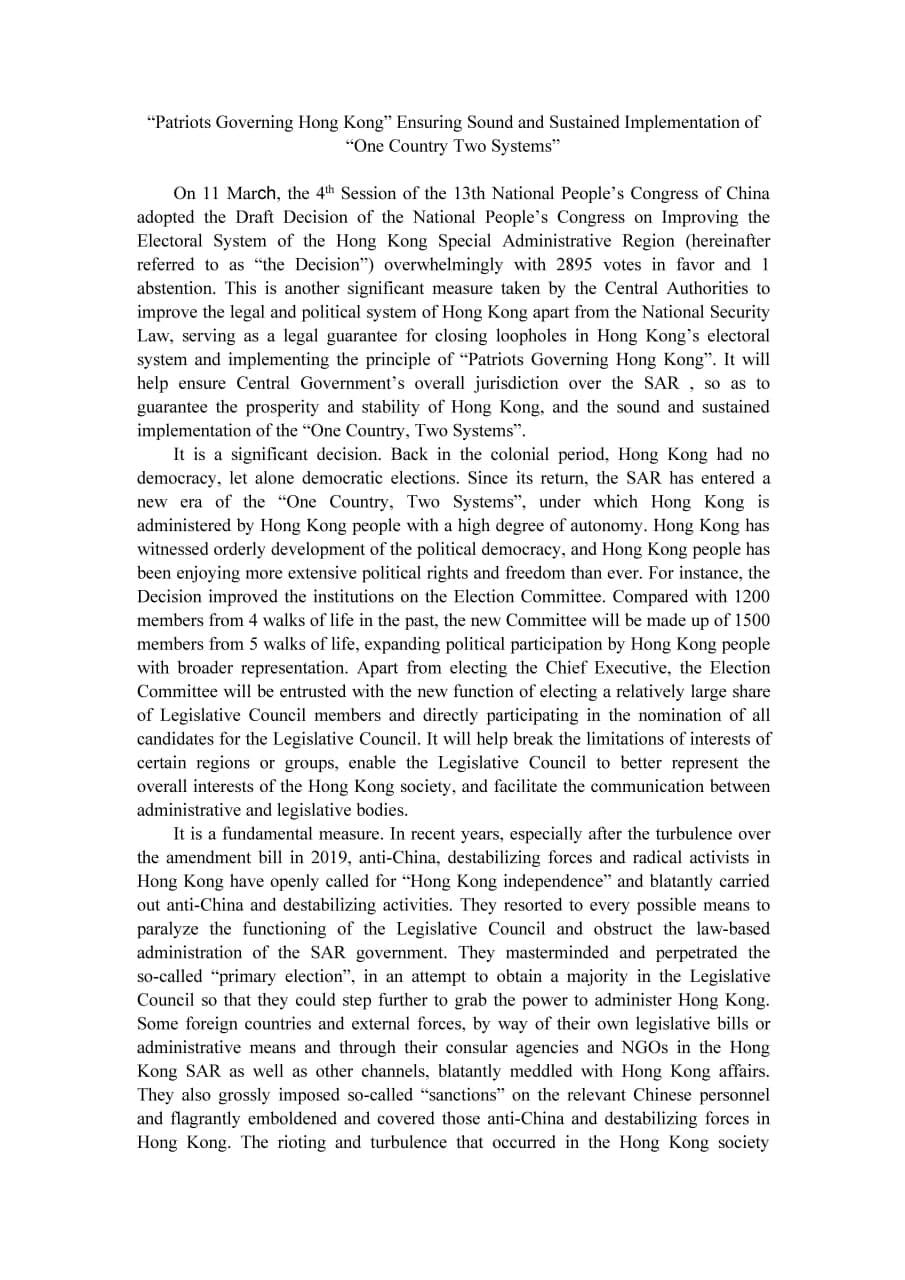 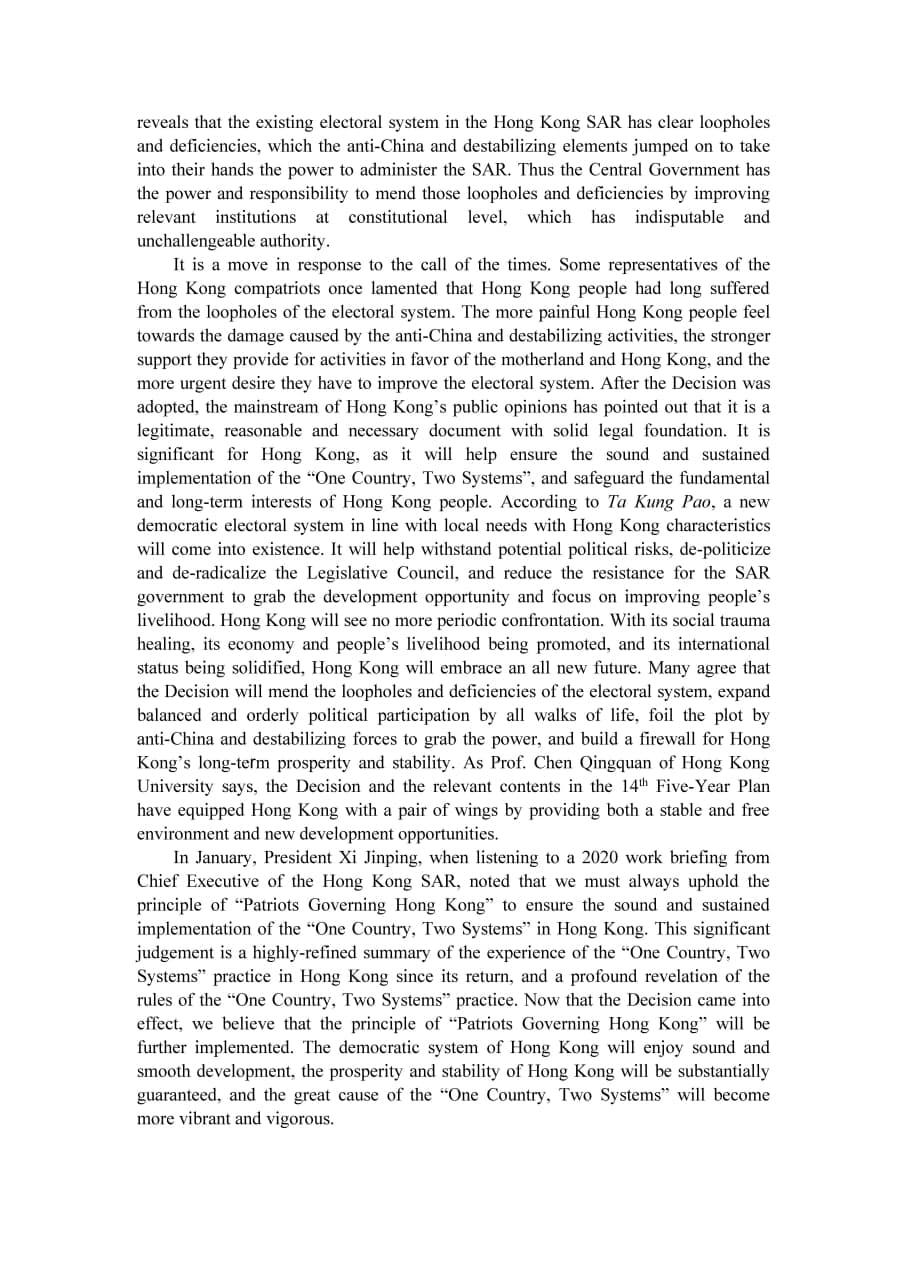