Editor’s Pick: Cambodia between China and the United States

Phnom Penh (FN), Aug. 23 – The world is now entering an era of new geopolitics which is in a difficult transition towards a multiplicity where old, new and other emerging actors are competing for roles in regional and global affairs. Power rivalry between China and the US has created some uncertainties in the region and the world leading some countries to re-assess their strategic and foreign policy outlooks in their relations with both powers. Cambodia is not an exception.

Despite its small size, small number of population and the weak economy, its geographical location and regional role, particularly its membership in ASEAN, Cambodia is strategically important to China and the US. At the same time, Cambodia also faces some difficulties in determining its foreign policy stance towards these two powers. Sometimes, Cambodia is perceived a center of geopolitical competition between these two global powers.

The fundamental principles of Cambodia’s foreign policy were founded by Article 53 of the 1993 Constitution of the Kingdom, a policy of permanent neutrality and non-alignment and peaceful co-existence with its neighbors and with all other countries throughout the world.

In April 2019, Prime Minister Hun Sen introduced a “sharp” new package of reform measures with a clear, laudable vision and some concrete, practical measures under the mottos “reform internally and make friends externally based on a spirit of independence”.

Cambodia’s foreign policy characteristic can be summarized as open and inclusive with hedging and diversification strategy. As a former war-torn country, Cambodia has always placed great importance and priority to peace and stability in the country and the region, prosperity, and development in its foreign policy.

Unlike China, it is noted that the exchanges of high-level visits between Cambodia and the US have been very rare leaving mutual trust in big gap.

Cambodia’s domestic political issues seem to be used by the US in exchange for its relationship with Cambodia. Thus, it appears that the US has interfered in Cambodia’s internal affairs by providing support to the opposition and encouraging local and international civil society groups, as well as some media outlets, to frame a “negative” perception of Cambodia which tarnishes the Kingdom’s image on the international stage.
In contrast, Cambodia and China do enjoy a very strong and stable relations and brotherly friendship, politically, Cambodia is one of China’s oldest and closest allies, the two countries always exchange frequent and regular state and high-level visits; economically, China is Cambodia’s top foreign investor, a major donor, and an increasingly important trading partner; and culturally, Chinese values are deeply embedded in many aspects of Cambodian society.

In addition, Cambodia has fully and actively engaged in China’s BRI for the fact that economic development opportunities generated from this initiative are believed to be tremendous. Moreover, in October 2020, China and Cambodia signed a free trade agreement (FTA) between the two nations marking the beginning of a new era of comprehensive strategic cooperation between the two countries.

With Cambodia encountering severe challenges stemming from the coronavirus pandemic, China as a staunch friend has done its utmost to work with the Cambodia to fight against the pandemic. Cambodia and China have stood together and helped each other in times of need since last year and Prime Minister Hun Sen’s visit to China at a time when the pandemic situation in China was still grave demonstrated his strong support for China.

China has continued to support Cambodia in its battle against the epidemic as much as it can according to the needs of the Cambodia. China has provided millions of doses of vaccines to Cambodia. Cambodia’s Prime Minister Hun Sen said he made the right decision to choose China as the main vaccine source and the strategic vaccine supply while other countries’ vaccine donation is also welcome.

It is believed that the relations between Cambodia and China would continue to grow stronger and diversify into all areas of common interest. The solidarity in addressing pressing international challenges, solid experience in bilateral dialogue, acceleration of all-level contacts on different platforms, deeply-rooted mutual understanding and respectful approach will undoubtedly navigate the two countries to greater achievements both nationally and globally.

At the same time, it is also hoped that Cambodia and the US still have more opportunities and space to mend their ties and narrow down trust gap between them, but it mainly depends on the US whether or not it has good-will intention to improve its relations with Cambodia.

It is suggested that frank, frequent and regular bilateral dialogues and exchanges of high-level visits should be made to contribute in enhancement of mutual understanding. At the same time, Cambodia and the US should understand each other’s core national interests and foreign policy objectives and strategies and concerns, as well as respect mutual interests.

Overall, both China and the US have played important roles in promoting Cambodia’s development. Therefore, Cambodia should to find a way to balance relations between the two superpowers to maximize its political, economic and diplomatic returns, and should not give prominence to one particular major power over another. It is vital for Cambodia to formulate and strictly adhere to smart and flexible foreign policy and its relations with global powers and other countries in the region and the world to maintain the balance of friendship, peace, security, stability, national sovereignty and development.

The views expressed in this article are solely personal views of the author.
=FRESH NEWS 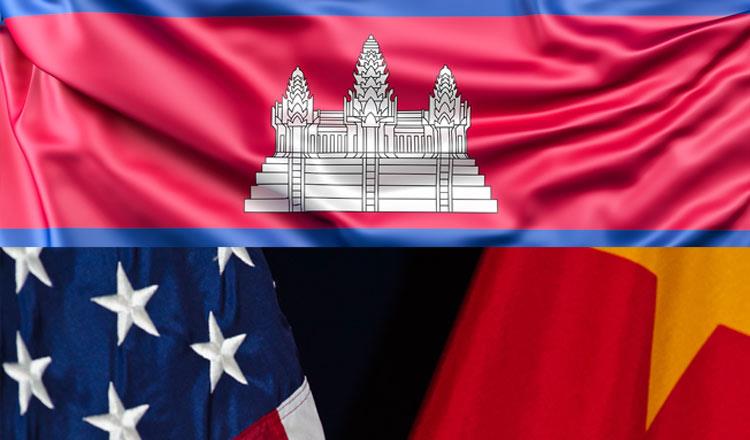