Affiliation with NGO Is Not a License to Break the Law with Impunity: Cambodia Mission

Phnom Penh (FN), Aug. 24 – The Permanent Mission of the Kingdom of Cambodia in Geneva deplores the personal views of a handful of special rapporteurs, who took their eyes off the bigger pictures as to the importance of the law application and equal treatment of all citizens in the kingdom.

In light of their misleading and highly selective remarks, the Permanent Mission of Cambodia would like to state the facts as follows:

1. As always, the so-called experts, not being UN staff members and only serving in their personal capacity, self-represent as a judge in an internal judicial affair of a sovereign state. This professional misconduct breaches the Code of Conduct and Manual of Operations of the Special Procedure Mandate Holders, which underline the importance of observing national legislations and the UN Charter.

2. The claim that the conviction of Mr. Rong Chhun is not justified and proportionate did not attend to factual and legal aspects. While solely obsessed with the lens of freedom of speech, they underestimated the irreversible and catastrophic consequences of fake news spread on social media platforms. Commenting on a border-related issue with fabricated materials does not equate to freedom of expression. The territorial matter, which is both sensitive and complicated in nature, must be resolved by recognized experts, and not be instrumentalized for political manipulation due to its potential to inflame the rise of ultra-nationalist sentiment from the historical context. There is no shortage of incidents unfolded as a result of politicized border discourses between Cambodia and its neighbors.

3. An online poll held by an anti-government organization, COMFREL, in August 2020 demonstrated that nearly 80% of the respondents were in favor of his apprehension, thus attesting to Cambodian people’s desire for peace and social stability, and support for the legal measure.

4. It is gravely erroneous to state, “Human rights defenders should never be arrested or convicted.” An affiliation with an NGO has never been a license to break the law with impunity. Individuals are not charged on the basis of who they are, but on law-prescribed offense. All charges brought before the courts purely involve criminal and constitutional breaches. The defendants had full opportunity to be heard, including the right to counsel, and to disprove the indictment as part of the rights to due process.

5. The rapporteurs’ demand for deletion of certain provisions of Cambodia’s penal code is tantamount to emboldening the anarchy and eroding the rule of law in the country. To tag law enforcement as repression of freedoms is to denigrate the rule of law and equal application to all citizens as warranted by the Constitution. It is the duty of everyone, including the self-proclaimed human rights defenders, to exercise their rights responsibly within the bounds of the law.

6. It is with deep regret that the special rapporteurs have never ever stressed that the exercise of freedom of expression, peaceful assembly and associations, carries with it special duties, responsibilities and limitations, as stipulated in the International Covenant on Civil and Political Rights. Cambodia’s Constitution protects freedom of expression, but not freedom to spread fake news, throw slander, incite violence and sow racial hatred.

To conclude, the Permanent Mission of Cambodia would like to remind the special rapporteurs of lending an ear to the statements by an overwhelming majority of delegations at the Human Rights Council, highlighting the necessity of improving the work of the Special Procedures Mandate Holders, which lies in their professionalism, accountability and responsibility in good faith.
=FRESH NEWS 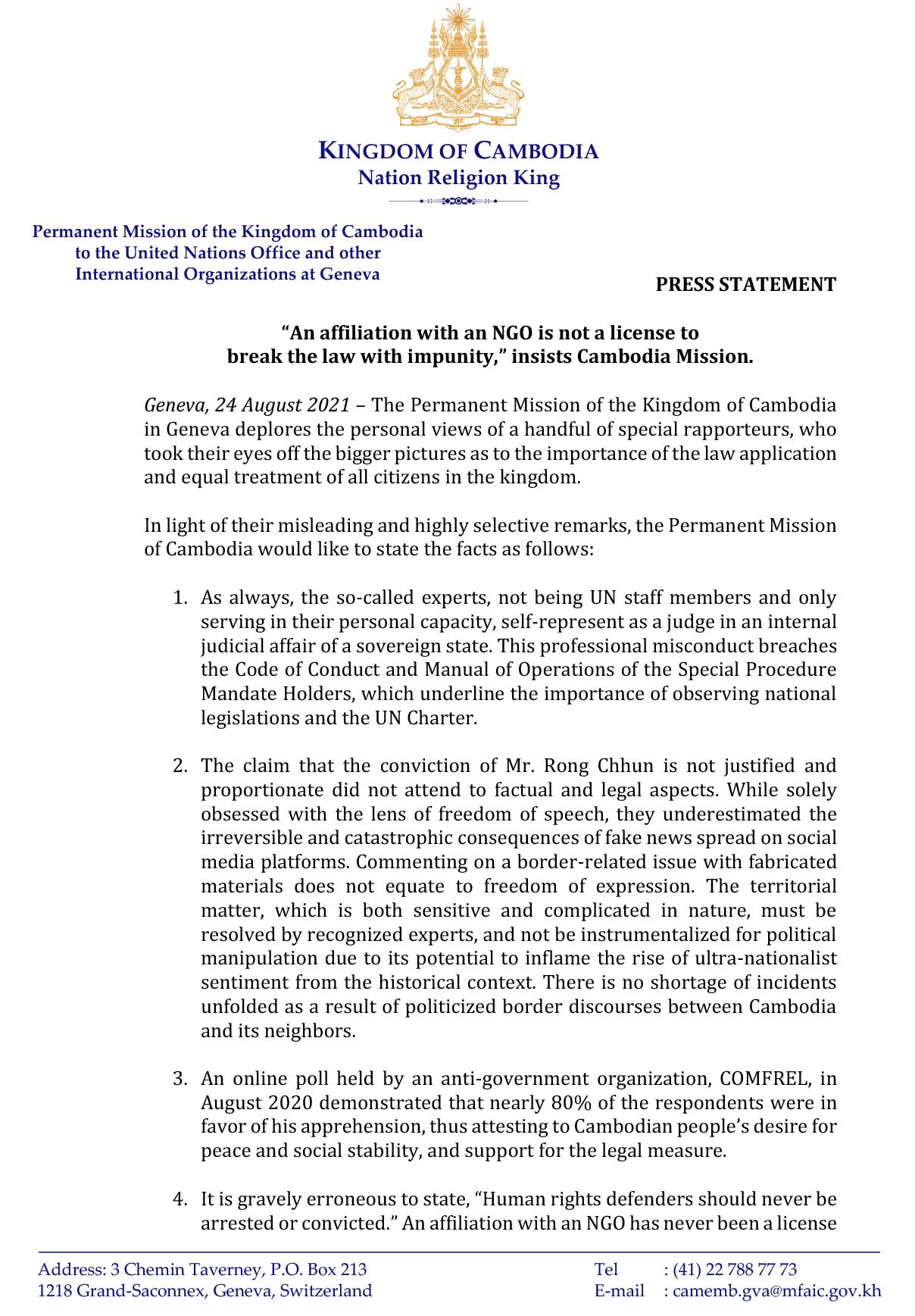 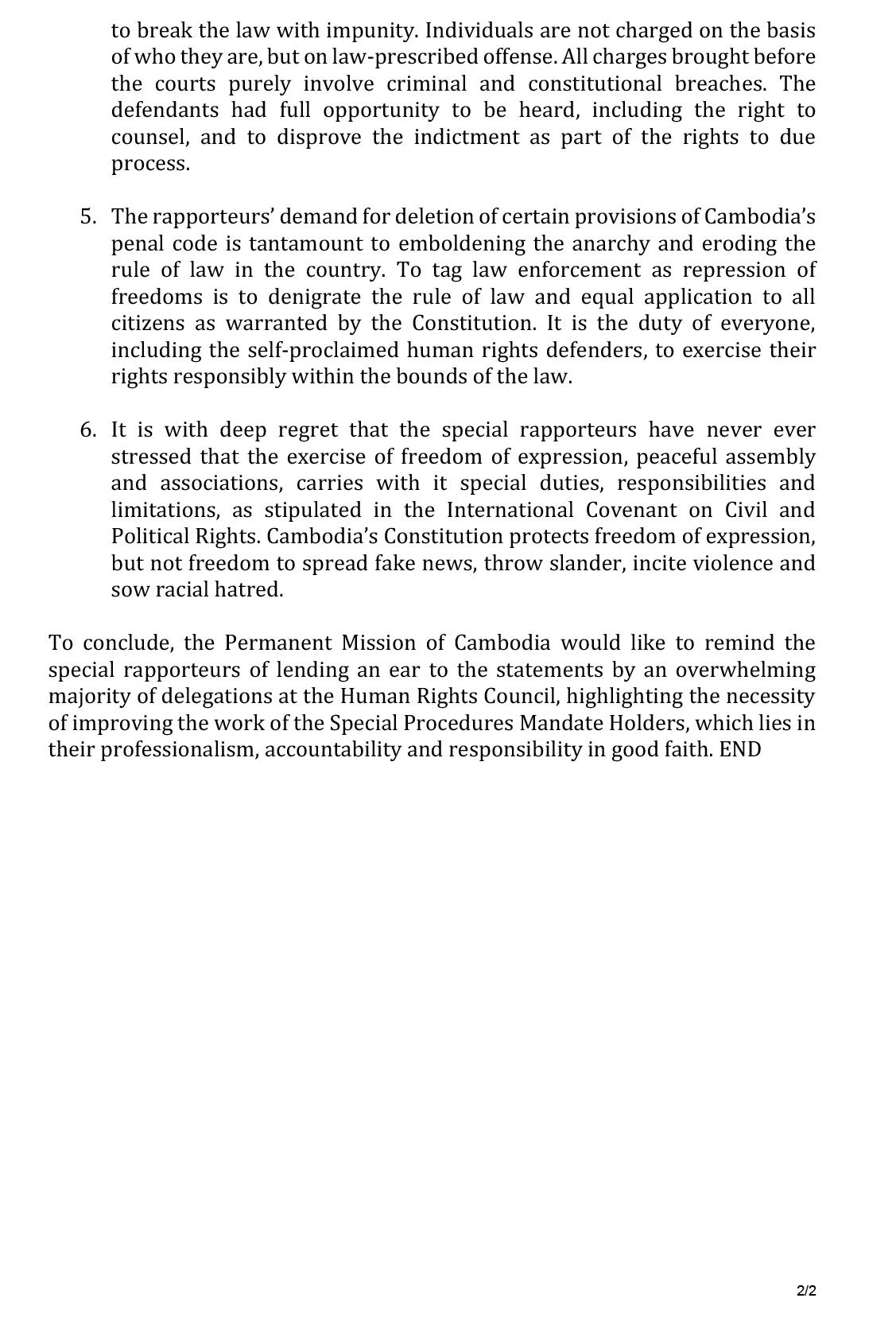